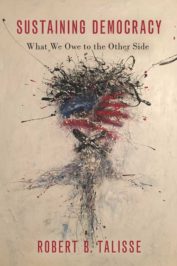 Sustaining Democracy: What We Owe to the Other Side

Understood in this way, democracy responds to a moral problem. Government in any form exercises power over those it governs. In a democracy, this power is shared among equals who disagree over how power should be used. Accordingly, when democracy enacts policy, some citizens are forced to comply. Thus, the problem: how can one be subjected to political power without thereby being subordinated by it?

Democracy answers that even when citizens find themselves on the losing side of a vote, they retain their equal status because they remain participants in government. In the wake of a political defeat, they are entitled to go on criticizing, campaigning, and organizing on behalf of their favored policies. Even when subjected to decisions they oppose, they are citizens rather than subordinates, each with an equal say.

Democracy is a dignifying proposal. Yet it invokes responsibilities, too. Two are fundamental to citizenship. First, citizens must take responsibility for their political order. They must use their share of political power to advance justice as they understand it. Second, they are also responsible to their fellow citizens. Just as no citizen is merely the government’s subject, no citizen is another’s inferior or boss. Citizens are equals; they thus must show one another a certain kind of regard. Citizens generally owe one another a chance to speak, a fair hearing, and a respectful tone, even when they disagree about crucial political issues.

But there’s the rub. It’s difficult to regard political opponents as our equals. After all, when we disagree about politics, we typically are disagreeing about what justice requires. Accordingly, our opponents strike us as not only wrong, but in the wrong. When the stakes are high, we cannot help but see our rivals as on the side of injustice. Why show those who favor injustice any regard whatsoever?

Call this the democrat’s dilemma. Note the lowercase “d.” The dilemma confronts citizens regardless of partisan affiliation. It arises because the two responsibilities of citizenship can conflict. In the fray of politics, treating opponents as equals concedes something to them and their views. Moreover, in showing foes the appropriate regard, we risk appearing fickle to our allies, which weakens our alliances. In short, meeting our responsibility to our fellow citizens contravene our responsibility for advancing justice.

Citizens hence face a conflict: when the political chips are down, why not treat one’s opponents as enemies rather than as fellow citizens? Why not regard them as obstacles and simply work to overcome them?

The democrat’s dilemma has been largely overlooked by political theorists. My new book Sustaining Democracy: What We Owe to the Other Side develops a response to it. Rather than emphasizing our opponents’ entitlements, I argue that sustaining democratic relations with our enemies is necessary if we are to uphold healthy relations with our allies.

The widespread phenomenon of belief polarization is the key. It shows that interaction within coalitions leads members to shift into more extreme postures. In working with allies, we subject ourselves to cognitive forces that render us more strident and unduly confident in our views. Further, our more extreme selves are also more conformist. As we shift towards extremity, we also grow more insistent on homogeneity among our allies. Belief-polarized alliances hence become fixated on poseur-detection and in-group purity. They consequently grow more dependent on centralized standard-setters for the group, thereby becoming more internally hierarchical.

Belief-polarized groups expel members who deviate from dominant expectations. They thus shrink until they are composed strictly of hardliners who adopt increasingly hostile attitudes towards those perceived to be lapsed allies. In this way, when we respond to the democrat’s dilemma by suspending civil relations with our opponents, we heighten our exposure to forces that transform our political friends into political enemies.

Observe that the democrat’s dilemma confronts citizens because they are doing what they should. Belief polarization is a byproduct of responsible citizenship. It cannot be eliminated, but only managed.

The key to managing belief polarization does not lie with learning to love our political enemies. It rather has to do with taking steps with to broaden our sense of acceptable variation among our allies. Were political conditions not already so deeply polarized, we might do this by listening to our opponents and engaging our most fundamental differences. As things stand, a different approach is necessary.

It might sound counterintuitive, but to manage belief polarization, citizens need occasions to distance themselves from their political alliances and rivalries alike. Citizens require moments of solitude that allow for a kind of political reflection that is detached from the clamor of politics. They need exposure to political ideas that cannot be fit into current partisan categories; they need to engage with perspectives that are addressed to political issues that feel alien. In short, belief polarization can be managed by seeing our contemporary partisan conflicts within the larger contexts and trajectories of politics.

Take a moment to Google the phrase “this is what democracy looks like.” The search will return thousands of images of masses of people gathered in public to express a common political message. This is, indeed, a prominent visage of democracy. But democracy requires citizens to be both active and reflective. The democrat’s dilemma shows how these two elements of responsible citizenship pull apart. The dynamics of belief polarization reveal that although democracy often is enacted when groups of citizens take to the streets, there is a crucial kind of democratic activity that is performed when a citizen sits alone in a library.

Robert B. Talisse is W. Alton Jones Professor of Philosophy at Vanderbilt University. His central research area is democratic theory, where he pursues issues concerning legitimacy, justice, and public political argumentation. He is the author of Overdoing Democracy: Why We Must Put Politics in its Place (Oxford University Press, 2019), forthcoming in paperback.