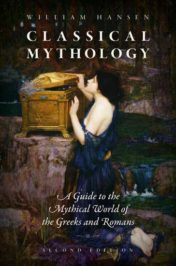 Classical Mythology: A Guide to the Mythical World of the Greeks and Romans

According to the early Greek poet Hesiod (ca. 700 BC), the primordial human community consisted only of men, who lived lives of health and ease, enjoying a neighborly relationship with the gods. That relationship soured, however, after Prometheus deceived the Olympian gods for the benefit of mankind. In retaliation, Zeus schemed to punish men by inserting woman into their community. At Zeus’s instruction, Hephaistos fashioned a maiden from earth, Athena dressed her, the Graces and Peitho (Persuasion) ornamented her with necklaces, the Hours placed a garland of flowers on her head, and Hermes put lies and deceit in her breast, gave her a voice, and named her Pandora (All-Gift), since all the gods had gifted her. Zeus then directed Hermes to take this irresistible creation to a certain Epimetheus, who accepted her. Pandora presently took the lid off a great jar, scattering countless spirits of misery, including diseases and toil, among mankind. The only spirit to remain in the jar was Hope, since Zeus had Pandora replace the lid before she escaped (Works and Days 53-105).

The first woman is made to be physically attractive in order to induce a human male to accept her. That man is the foolish Epimetheus (Afterthought), brother of Prometheus (Forethought). In addition to making the primordial community gendered, the maiden releases from a mysterious jar numerous evils in the form of silent supernatural beings, who now become part of the world, introducing mortal men for the first time to labor and sickness, including fatal illnesses, and so to death. Hesiod does not say where the jar came from, but since he calls it a pithos, a large storage vessel some five or six feet in height, Pandora will not have brought it with her; indeed, she will not have carried it at all. Notice that in this earliest text of the myth, the vessel is a jar, not a box. The international expression “Pandora’s box” goes back to a mistranslation by Erasmus of Rotterdam, who rendered Pandora’s pithos “jar” as pyxis “box” when he retold the myth in Latin in 1508.

A similar narrative is found elsewhere in Greek literature, not as a myth but as an Aesopic fable. In this form of the story, the character who lifts the lid off the jar is described simply as an anthropos “person” (that is, a human but not specifically female or male), and the jar contains good things rather than evils. According to the fable, Zeus once gathered together everything good, placed it in a pithos, put a lid on it, and set it down beside an unnamed human being. Eager to know what was inside, the person opened the jar, with the result that the good things flew up to the habitation of the gods; only Hope remained below, for it was still in the jar when the anthropos replaced the lid. So only Hope remains among humans, promising us each of those good things that escaped (Babrios Fables 58).

The basic message of the myth and the fable is the same: at some time in the past humans enjoyed conditions of ease like that of the gods, but thanks to the actions of a particular human all that changed such that mortals now have lives of misery, though we carry on, motivated by hope. The difference between the two forms of the story is that one image presents the conditions of human life in terms of evils (there used to be no evils, and now there are), whereas the other presents it in terms of good things (there used to be all good things, and now there are not). Depending upon which image is employed, the jar either shields humans from its contents or makes them available. Strictly speaking, the motif of Hope makes good sense only in the second kind of jar, the jar of blessings, for only in this form of the story do things within the vessel affect persons outside of it. Although Hesiod’s intended meaning is clear, his narrative somewhat confusingly mixes the two images.

Why does Pandora open the jar at all? Hesiod says only that, as she lifts the lid, “she ἐμήσατο grievous cares for human beings” (Works and Days 95). The verb he employs can suggest a range of agency from “devised,” implying knowledge and intent, to simply “wrought,” suggesting innocence or even nothing at all. So, Pandora may act from malice, indifference, curiosity, or something else, but the poet does not specify, probably because what was important to him was, not why she releases miseries into the world, but that it is a woman who does so. In any case, all modern attributions of motive to Pandora are necessarily conjectural, possibly revealing more about the attributor than about the maiden.