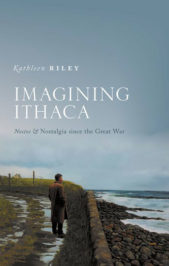 Imagining Ithaca: Nostos and Nostalgia Since the Great War

Summer 2021 marked the 85th anniversary of the start of the Spanish Civil War, a brutal struggle that began with a military uprising against the democratic Second Republic and ended, three years later, in victory for the rebels under General Francisco Franco. The enduring fascination of that conflict, its ability to grip the global imagination, belies its geographical scale and is testament to the power of art. Pioneering photojournalists Robert Capa and Gerda Taro seared into the cultural memory frontline images of compelling intimacy and immediacy. Ernest Hemingway and George Orwell turned their experiences on the front lines into classics of English literature, For Whom the Bell Tolls and Homage to Catalonia. And in his grisaille rendering of the atrocity of Guernica, the exiled Picasso made Spain’s primal anguish an everlasting icon of the twentieth century.

Within Spain the civil war’s traumatic legacy is still raw, as witnessed by the decision of the present socialist-led government to exhume Franco’s remains from the Valley of the Fallen, a basilica built in part by convict labour and a place of pilgrimage for the far right. The causes of the uprising were many and complex, rooted in history as well as ideology. To non-Spaniards the struggle appeared more binary and portentous, acquiring mythological status as “the last great cause,” “the decisive thing of the century,” the battleground for the soul of Europe. It mobilized, in Ronald Blythe’s words, “a great modern Theban band” of foreign volunteers in whom the battle noises from Spain produced “spiritual reactions which would have shocked Wilfred Owen and pleased Rupert Brooke.” A high proportion of those volunteers were already political refugees, a fact which partly explains why the mythology of “the last great cause” is often underpinned by an Odyssean sense of nostos (homecoming), a vision of Ithaca, a nostalgia of hope. For, as Primo Levi once wrote, the search for home is “part of a far greater hope, that of an upright and just world, miraculously re-established on its natural foundations after an eternity of upheavals, of errors and massacres, after our long patient wait.”

Among hundreds of graffiti left by Republican inmates inside Fort San Cristóbal near Pamplona, there survives in the punishment cell an inscription (most unusually) in Latin—four lines from Ovid’s Tristia, the Roman poet’s elegiac epistles from exile—which translates:

When the saddest image of that night recurs,

which was for me the final moment in the city,

when I recall the night in which I left behind so much dear to me,

a tear now also glides from my eyes.

The likely author of the graffito was the classically named Virgilio Zorita Fajardo, originally from Medina del Campo, whose occupation was listed as “Jefe de Telégrafos” and who was 50 when he entered the prison, the same age as Ovid when he was banished to Tomis by the emperor Augustus. In the Tristia, Ovid declares his misfortunes to be greater than those of that archetypal nostalgic, Ulysses (Odysseus), who spent ten years returning from Troy to Ithaca and longed “only to catch sight of the smoke curling up from his own land.” Ovid never returned to Rome or his Penelope and died in exile, but he became his own Homer, recognizing the power of poetry to immortalize his sufferings and his yearning for home.

Virgilio had been transferred from Cáceres prison to San Cristóbal in 1939. In January that year, Luis Portillo, a young law don from Salamanca University, having remained loyal to the Republican government, was forced into exile in Britain. For two decades he was unable to set foot in Spain. According to his son Michael, he suffered always from a sense of impossible nostos, from “a tremendous nostalgia for what had been and what might have continued to be.” The tristia Luis composed in exile, many in sonnet form, were love letters to a lost Spain and especially to La Dorada, his beloved Salamanca, which was every bit as integral to his memory of who he was as Ithaca was to Odysseus. And like Odysseus—and Ovid—he knew the importance of keeping Ithaca in mind, of exercising the redemptive imagination through language; he knew that, in its potential to restore form and beauty to what is fragmented, poetry itself is a kind of homecoming. Among the poems in his published volume, Ruiseñor del destierro, are elegies for absent friends such as the murdered poet Lorca, for the conviviality of the plaza and the excitement of the corrida, and for a particular fig tree remembered from childhood which “to the spell of love each summer / offered honey” (“al conjuro de amore en cada estío / brindaba miel”). There is also what may be termed an inverted nostos, rather like Rupert Brooke’s famous sonnet, “The Soldier”, but commemorating a corner of Trafalgar Square that is forever Spain. “Mi Española en Londres” is an ekphrasis on Velázquez’s Venus in London’s National Gallery, which begins:

Always waiting for me though never heaving a sigh.

I visit her as often as I can.

Recumbent, she never raises herself nor even stares at me.

Yet she offers me unfading beauty.

Like Luis himself, Velázquez’s painting—his only extant female nude—is a survivor and an émigré. Transplanted to Yorkshire in the early 1800s before ending up in the National Gallery a century later, this languorous goddess had evaded censorship in Inquisitorial Spain, suffered a meat-clever attack in 1914 by suffragette Mary Richardson, and been exiled to a disused Welsh slate mine during the Blitz. Here, in Luis’s sonnet, art’s resilience and poetry’s capacity to recollect and revivify are what make nostos possible. Or, as Seamus Heaney expressed it, poetry “opts for the condition of overlife, and rebels at limit.”

Poetry as homecoming is also the tenet of a poem by Englishman John Fownes-Luttrell, who at 20 went to Spain as a volunteer to assist with the Refugee Children Aid Society. While stationed in the Catalonian town of Puigcerdà in November 1937, he wrote “Song of Dead Spanish Soldiers”, the final stanza of which envisages a spiritual nostos, a resurrection through verse:

We shall return indeed to our native land.

Although the shells from which we could not hide

Scattered our limbs upon the burning sand,

We shall return, we shall not die!

Whether or not the Spanish Civil War can legitimately be viewed as “a poet’s war,” as Stephen Spender pronounced, much of the poetry (and art) it generated was infused with an Odyssean nostalgia of hope and spoke to a homesickness inherent in the human condition. Heaney, who had been in Madrid when the Troubles broke out in Northern Ireland, was fascinated by Lorca’s notion of duende, the daemonic source of artistic inspiration, a sense of otherness and otherwhere that paradoxically always feels like home. Paraphrasing Lorca, he said “poetry requires an inner flamenco… it must be excited into life by something peremptory, some initial strum or throb that gets you started and drives you farther than you realized you could go.” Elsewhere he identified that initial strum or throb as “a homesickness.”

In a sonnet directly about the civil war, “Pilares de dolor y gloria”, Luis Portillo describes his exiled self as a “reliquary”, a vessel of memory and Ithacan longing. But, as he demonstrates, it is poetry, ignited by the throb of homesickness, that transmutes loss and longing into hope—the hope “triunfar con nuestra paz contra la guerra / y redimir la vida, de la muerte” (“to triumph with our peace against war /and to redeem life, from death”).

Feature image: Robert Capa, On the road from Barcelona to the French border, January 1939. Via Wikimedia Commons.

Kathleen Riley is the author of Imagining Ithaca: Nostos and Nostalgia Since the Great War(Oxford 2021). Her other works include Nigel Hawthorne on Stage and The Reception and Performance of Euripides’ Herakles: Reasoning Madness. She is co-editor of Oscar Wilde and Classical Antiquity and, most recently, a contributor to Seamus Heaney and the Classics: Bann Valley Muses. Her book The Astaires: Fred and Adele has been optioned for a feature film currently in development. Riley is presently at work on a new volume about classical responses to the Spanish Civil War.

Want to know the Latin for “true love”?