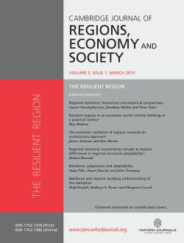 Cambridge Journal of Regions, Economy and Society is an international multi-disciplinary journal publishing referred papers on the spatial dimensions of contemporary socio-economic-political change.

Read "No automation please, we’re British: technology and the prospects for work" from the journal.

Will a robot take your job? The fear of artificial intelligence (AI) and digital automation as a growing threat to human labour has been on the rise in recent years. The widespread potential impact of these technologies has fuelled media interest. Some reports claim that between half and one-third of jobs could be eliminated in the near future. The BBC has even provided a helpful calculator where you can assess the risk to your own occupation from automation.

Concerns regarding the impact of new technologies on jobs are, of course, nothing new. From the Luddites, through to the computer revolution of the 1960s, to today’s anxiety about the impact of smart technologies, apocalyptic narratives have commonly accompanied new technological possibilities. Despite these concerns, so far, over the long term at least, employment has continued to grow and the occupational structure has evolved, adapting to and incorporating changes wrought by new technologies. Yet, say many contemporary commentators, this time is different.

The argument now advanced is that progress in AI, machine learning, and robotics threaten to replace jobs right across the occupational structure. More directly, AI and robotisation are identified as “general purpose technologies,” potentially applicable to a wide range of contexts and capable of replacing human workers in jobs even with complex and non-routine elements.

But how worried should we be? In short, our research suggests not as worried as some of the more breathless accounts would have us believe. For one thing, many of the estimates of job losses are based on a form of technological determinism: it is assumed that because tasks can potentially be automated, they will be, wiping out jobs in the process. Yet, occupations typically comprise a range of tasks and not all these tasks are susceptible to automation. Moreover, it is too simplistic to assume that the nature of occupations will remain static. Technological developments afford the opportunity to reconfigure the mix of tasks within occupations, thereby altering the content of jobs rather than destroying them. New jobs are also likely to be created, as technology is used and applied in society. Rumours of the death of work, in short, look exaggerated.

Whilst the engineer and computer scientist can tell us what can be done, the economist would ask whether there are incentives to do it. Here, the adoption of new technologies depends critically on context, as we have argued in our research. A key influence on the decision to automate is the relative cost of producing goods or services using available technology or labour. In relatively low cost, labour abundant economies there is less incentive to automate. This helps explain why the use of industrial robots, for example, is so much lower in the UK than Germany or South Korea. The relative cheapness of labour also matters for the dynamics of the economy and job creation: a low wage economy (such as the UK) with less extensive and deep automation will also tend towards lower productivity, lower wages and higher costs, hence weakening product and labour demand right across the economy. Paradoxically, too little automation might pose a more immediate and pressing challenge to living standards and worker prospects than too much.

Context also matters in thinking about how automation develops and how it is used to reconfigure or replace jobs. Who is directing research in AI and new technologies? Too often large tech companies dominate the agenda, their goal being to remove the highest cost human input into production. The human element in automation—the quest for a higher quality of working life—is crowded out by a commercial imperative to make more profit.

“Technology could, instead, be used to complement human labour and enrich jobs, raising productivity and sustaining employment opportunities.”

In private companies, too, there is a focus on “shareholder value,” with automation used to lower labour costs. Here the risk is that technology is developed and used to lower average wages and to lower skill levels. While higher short-term profits may be realised, these gains may be at expense of workers who suffer lower quality jobs.

But what of the alternatives? Technology could, instead, be used to complement human labour and enrich jobs, raising productivity and sustaining employment opportunities. Here, there is a role for the state, not just through the adoption of a more directive approach to research and development funding in this area, but through a combination of leadership, information, persuasion, example, regulation, and procurement practice. In these ways, the state could have a positive impact on job design such that automation and AI is incorporated in ways that enrich rather than destroy jobs. Whilst anathema to adherents of free-market economics, the role of government in COVID-19 vaccine development provides a glimpse of the positive role that the state can— and should— play in the economy.

The point is, there is nothing deterministic about the new technologies of AI and automation. How they impact upon jobs and on economic and social structures depends crucially upon the choices we make as societies—a fact that is sadly too often forgotten.

Gary Slater is Associate Professor of Economics at Leeds University Business School. His research interests include labour economics, macroeconomic policy and political economy with recent work focusing on the relationship between technology and occupational change and the impact of regulation on temporary agency workers' pay and outcomes.

David Spencer is Professor of Economics and Political Economy at Leeds University Business School. His research interests lie in the areas of labour economics and the political economy of work.

They are the authors of the paper “No automation please, we’re British: technology and the prospects for work”, published in the Cambridge Journal of Regions, Economy and Society.