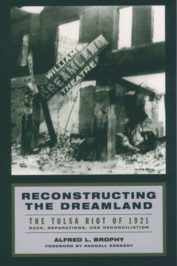 The below is an edited version of the new foreword to the upcoming edition of Reconstructing the Dreamland: The Tulsa Riot of 1921: Race, Reparations, and Reconciliation written by Alfred Brophy.

On 1 June 1921, mobs comprised of ordinary white Oklahomans destroyed Greenwood, a black neighborhood in Tulsa sometimes referred to as “Little Africa.” They were alarmed by rumors that a black man had raped a white woman and that a “negro uprising” was afoot. They were disturbed by assertiveness displayed by black veterans of World War I. They were resentful of the evident ambitiousness and affluence of Greenwood’s upper class and viewed its success as an affront to white supremacy. Separated from white Tulsa by railroad tracks, Greenwood was subject to the common deprivations imposed upon black communities in Jim Crow America. Yet, its residents had succeeded in endowing it with an attractive collective buoyancy reflected in an entrepreneurial verve that led some to call its main thoroughfare “the Black Wall Street.” Animated by a conviction that Negroes must be made to stay in their “place” at the bottom of the social pyramid and habituated to the use of vigilante violence against blacks, the rioters proceeded to subject their African American neighbors to injury, murder, looting, pillaging, and arson. At least a hundred residents of Greenwood were killed while thirty-five city blocks were torched, destroying churches, businesses, and all sorts of other dwellings. The riot rendered more than a thousand families homeless.

As is typical in eruptions of mass, white-on-black, racially-motivated violence, the riot in Tulsa involved a failure of governments—municipal, state, and federal—to cloak African Americans with the equal protection of law. Police authorities not only failed but, to a significant extent, did not even try to protect Greenwood from the vengeful mobs. Worse still is that many of the whites who engaged in “Negro hunting” had been negligently deputized by state and local police authorities. In Tulsa, putative guardians of law and order frequently allied themselves with racially-motivated criminals.

In Reconstructing the Dreamland, initially published in 2002, Professor Alfred L. Brophy excavates this baleful episode. He uncovers the riot’s antecedents, its unfolding, and its aftermath. He details the initial acknowledgment by some prominent whites that Tulsa as a polity had committed a terrible crime against Greenwood that warranted restitution, the superseding campaign (largely successful) to blame the riot on the victimized black community, and the layers of deceit and indifference that have, until recently, enshrouded this tragic episode.

Rightly dissatisfied with the distorted version of events bequeathed to the public by an all-white grand jury that blamed blacks predominantly for the riot, Brophy carefully utilizes sources that have often been slighted: findings by black journalists, reminiscences of African American witnesses, briefs by black attorneys. Attentive to the full spectrum of observers, Brophy is insistent that the Greenwood perspective be fully considered. By doing so, he unveils corrective facts and forgotten interpretations. He also uncovers a spectrum of views that contended for primacy within Greenwood. He introduces readers to African Americans who thought it best to resort to arms to thwart lynching and to black litigants and attorneys who displayed more faith in the administration of law than state and federal tribunals deserved. Brophy’s exploration of litigation arising from the Tulsa riot is especially noteworthy. He describes in detail the legal doctrines that were invoked to thwart efforts to obtain redress for police malfeasance and to recover under insurance contracts.

For most of Reconstructing the Dreamland, Brophy narrates what happened in Tulsa, analyzing evidence and assessing competing interpretations. In the concluding chapter he speaks prescriptively, maintaining that Tulsa and Oklahoma ought to do something to acknowledge concretely the governmental derelictions bound up with the riot. More specifically, he argues that survivors are owed an apology and reparations. Addressing concerns that the rectification he urges would open the way to a flood of claims generated by countless injustices, Brophy stipulates four criteria by which demands for reparations could sensibly be limited. Using those criteria, he compares the case for reparation in Tulsa to those in which reparations have been granted to others and concludes that surviving victims of the tragedy in Greenwood have an even stronger claim than victims who have attained relief in analogous circumstances.

Reconstructing the Dreamland emphasizes the centrality of racially motivated violence in American history. Nowadays when reference is made to the term “race riot,” many immediately conjure up images of the disturbances in 2020 after the killing of George Floyd or the disturbances in 1992 after the infamous acquittals of the police officers who assaulted Rodney King or the disturbances in 1968 after the assassination of Martin Luther King Jr. In those riots, people of color comprised the bulk of the looters and arsonists. Reconstructing the Dreamland recalls an earlier tradition of race rioting in which whites targeted blacks and their property for destruction. Indicative of the significance of that tradition is that revulsion against it was the immediate spur for the creation of the most important racial self-defense organization in American history—the National Association for the Advancement of Colored People (NAACP). The NAACP was created in direct response to the Springfield, Illinois riot of 1908—an anti-black pogrom eerily similar to that which engulfed Greenwood. For the first several decades of the NAACP’s existence, its primary activity consisted of publicizing the truth about racially motivated lynchings and riots, including the frequent complicity of police. Failures of police to extend to blacks the equal protection of the law (including protection against police brutality) have nourished cynicism toward police authority that is conspicuously evident within many African American communities. For those who want to know more about the etiology of this cynicism—or, perhaps, it is better termed realism—Reconstructing the Dreamland offers sobering detail.

“Brophy’s book not only recounts history; it also makes history in an important sense by keeping alive through meticulous scholarship the memory of an important event.”

During the twenty years that have elapsed since the initial publication of Reconstructing the Dreamland, there has emerged a new appreciation for the depth, prevalence, and intensity of anti-black racism. It is evident in studies undertaken by governments—such as the 2001 Tulsa Race Riot Commission Report for which Brophy served as a consultant. It is embodied in the planning for Greenwood Rising, a museum sponsored by the 1921 Tulsa Race Massacre Centennial Commission. It is reflected and reinforced in the Oklahoma public school curriculum that directs that attention be paid to the Tulsa atrocity. It has seeped into popular culture as in the terrifying opening scene of the HBO television series “The Watchmen,” a scene that recreates the chaotic violence that overcame Greenwood. It has prompted scholars in many disciplines—history, sociology, political science, literary studies, law— to write scores of articles and books examining racially motivated violence. Brophy has contributed splendidly to this flowering of research and analysis. His book not only recounts history; it also makes history in an important sense by keeping alive through meticulous scholarship the memory of an important event. Revisiting meaningful scholarship is always timely. But for alarming reasons this is a particularly apt moment to re-read Reconstructing the Dreamland. Surges in racial violence, ongoing scandals of racist policing, and determined efforts to falsify history make clear that the story of the Tulsa riot and the deplorably inadequate responses to it remains hauntingly pertinent today.