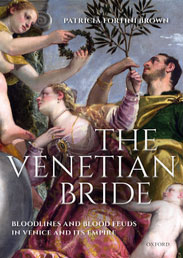 The Venetian Bride: Bloodlines and Blood Feuds in Venice and its Empire

What does one do with a castle? The Venetian Terraferma (and, indeed, all of Europe) is dotted with medieval castles that have long outlived the purposes for which they were intended. And yet, built of stone, they are costly to demolish and—more importantly—of great historical interest. Despite fires, earthquakes, and simple neglect, many remain standing thanks to the creativity of owners, architects, and municipalities in finding ways to restore and preserve these evocative palimpsests of the past.

The challenges were daunting. Lacking electricity, all such complexes had to be wired (not just rewired) with up-to-code modern installations, not to mention internet connections. Lacking modern plumbing, all had to be retrofitted with a supply of running water, sewers, and new bathrooms. Lacking heating and air conditioning, all had to augment fireplaces and braziers with modern HVAC systems for heating, ventilation, and cooling. The difficulty of making such improvements was compounded by the necessity to accommodate them within rigid stone walls, that themselves required repointing and repair.

The Castello di Villalta is situated atop a mound in the countryside overlooking vineyards and fields of grain with views south all the way to the Adriatic on a clear day. Home of the Della Torre family since the fifteenth century, the medieval castle was badly damaged by an earthquake and a peasant uprising in 1511 but was soon rebuilt and expanded with a Renaissance wing. The site of a Della Torre fratricide in 1699, the castle was abandoned after the execution of Lucio Della Torre in 1723 for the murder of his Venetian wife and became something of a haunted house, with rumors of subterranean escape passages and Lucio’s ghost prowling the walls at night. The Della Torre heirs sold off the castle, with crumbling walls and fallen ceilings, in 1905. During the First World War it served as an Austro -Hungarian command post after the defeat of the Italian army in the Battle of Caporetto. After passing through several hands and partial restorations, the  castle was reacquired by descendants of the Caporiacco family, its original owners, in 1999, and today—carefully restored and updated—it serves not only as a captivating venue for wedding celebrations, but also as a site for concerts, meetings, and cultural events.

The Castello di Udine stands atop an acropolis overlooking the city. After the earthquake of 1511, it was built as a replacement of the thirteenth-century residence of the Venetian Luogotenente of the Patria del Friuli. With the fall of the Venetian republic in 1797, Napoleon ceded the building to the Austrian army, which used it as a headquarters and barracks. The massive building became a museum in 1906 to celebrate the fortieth anniversary of the unification of the Friuli with Italy, and now hosts the Museo del Risorgimento and the Museo Archeologico on the ground floor; the Galleria d’Arte Antica, with paintings from the fourteenth through the nineteenth century, on the main floor; and the Museo della Fotografia on the top floor. It also features numismatic, sculpture, and plaster cast collections and galleries of prints and drawings, as well as art and photo libraries.

The fourteenth-century Castello di Colloredo di Monte Albano, consisting of a central block, three towers, and two wings, was the residence of the Della Torre’s closest relatives. Also badly damaged in 1511, it was rebuilt by the mid-sixteenth century with a studio frescoed by the artist Giovanni da Udine. Over the years, it was the home of poets and writers, including Ermes da Colloredo (1622-1692) and Ippolito Nievo (1831-1861). The Friuli was hit by a devastating earthquake in 1976, and the east wing of the castle crumbled to the ground. But the west wing, although damaged, survived and presently houses the Comunità Collinare del Friuli—a consortium dedicated to safeguarding the environment and promoting culture, tourism, and planning for fifteen small communities. The remainder of the castle is still undergoing reconstruction.

A few castles retain their original function. The sprawling Castello di San Martino, perched on a hillside above the town of Ceneda (now part of Vittorio Veneto), was built in the tenth century as the residence of the prince-bishop of the diocese and expanded over the years by a Della Torre bishop and others. After the fall of the Venetian republic, the new Kingdom of Italy passed a law in 1866 requiring the sale of church properties. The castle was put up for auction, but there were no buyers and it remained the property of the state. After the complex suffered significant damage in an earthquake in 1873, it was returned to the diocese in 1881. Restored by the church, it remains the residence of the bishop to this day. But it too has been adapted for modern use with two chapels, 30 guest rooms, a dining room, meeting rooms, and a large garden.

Some castles remain picturesque ruins. The eighteenth-century façade of the villa built atop the remains of the thirteenth-century Castello di Polcenigo (once the marital home of a Della Torre daughter) remains intact, but the remainder was gutted by fire. It now stands like an empty doll house, with the rooms open to the sky. The fireplaces and fragments of frescoes are still visible, along with sweeping view of the surrounding countryside, to the adventurous who climb a monumental stone staircase of 366 steps or wend their way up a subterranean passage from the town below.

These palimpsests of stone and timber embed the present in the feudal past. The medieval castles no longer serve as enclosures as defense, but as welcoming venues of hospitality, tourism, and cultural enrichment.