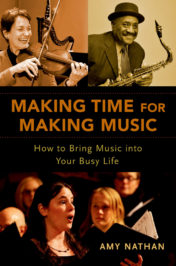 Making Time for Making Music: How to Bring Music into Your Busy Life

Susan Alexander found a way to fill the “big, depressing hole in your life where playing music with other people used to be”—a hole caused by this year’s official restrictions on in-person gatherings to limit the spread of the COVID-19 virus. That hole grew smaller when this avocational Maryland pianist discovered JamKazam, one of several free music-making software programs that nearly eliminate the annoying lag time in sound transmission that occurs when musicians try to make music together on Zoom or Skype.

“I’m now as busy playing chamber music as I was pre-pandemic,” she wrote in a how-to guide she created for JamKazam that she posted on the website of the DC Concert Orchestra Society. She also emailed her guide to ACMP (Associated Chamber Music Players), a group for fellow avocational chamber music enthusiasts. ACMP’s new executive director, Stephanie Griffin, had received emails this summer from other members who sang the praises of Jamulus, another low lag-time program. “I’ve never been a technology buff,” said Griffin, a professional violist. “I didn’t know about these programs.” She quickly sent out a survey to ACMP members to learn more.

The ACMP survey showed that nearly 30 percent of the more than 150 survey respondents were playing chamber music online, with JamKazam and Jamulus the two most popular programs used; a few also tried another option, SoundJack. Most respondents who weren’t yet making music online said they wanted to learn how, but fear of technology was holding them back. So Griffin set a new goal for ACMP, at least for the remaining months of the pandemic: to provide information on how to use online music-making programs.

To help overcome musicians’ tech fears, Griffin invited online players to join a Technology Task Force to tutor other ACMP members with the set-up process. Griffin has now successfully mastered JamKazam and Jamulus herself and plans to tackle SoundJack, Sonobus, JackTrip, and others. Because instructions on the programs’ websites can be challenging reading for non-techies, Griffin posted Susan Alexander’s JamKazam user guide on the public part of the ACMP website, making it available to ACMP’s 2,500 members worldwide, as well as to others. Griffin also posted a Jamulus guide and plans to roll out guides for other programs and host informational webinars.

A computer is required for these programs. Recommended extras—whose combined cost can range from $100 to $300—include wired earphones, a microphone, an audio interface device to adjust sound quality, and an ethernet cable for a stronger internet connection than wifi. However, Maryland singer Suzanne Epstein just uses her computer’s mic and doesn’t have an audio interface. Even so, she is able to make music via JamKazam with others in Maryland and Colorado.

“Cellist Mike Tietz … tried Jamulus this spring: ‘I had absolutely no audio knowledge, but with help from others, I’m now a “regular” online.'”

Violist Phyllis Kaiden, one of ACMP’s volunteer tutors, uses both JamKazam and Jamulus. A retired Seattle librarian with experience writing software, it still took her a while to master the programs this spring, while playing online with a friend in Canada. She invited local friends to join her. “When the weather was nice, they preferred to gather in backyards. Recently, as the weather turned bad, they’ve been more interested,” she said. “I’ve had luck getting people set up in half an hour. More frequently, it’s two hours.” Even those with no tech background catch on quickly, including cellist Mike Tietz, a retired New York lawyer who tried Jamulus this spring: “I had absolutely no audio knowledge, but with help from others, I’m now a ‘regular’ online.”

There are differences among the programs in how online playing occurs. With JamKazam, a player creates a session and invites others to join. With Jamulus, players can use public servers that anyone can join at any time. Kaiden didn’t like the idea of people barging in on a private session, so she created her own server—not an easy task. Her tech background helped. She lets others, including a local orchestra, use her server to set up their own Jamulus sessions.

Long before the pandemic, many programs already existed, created by tech-savvy musicians. When social-distancing rules arrived, the programs were updated and rolled out in a big way to help musicians stay connected. Most programs use open-sourced software that keeps being updated.

After the pandemic ends, some may stop playing online, but Kaiden said she’ll definitely keep on with her Canadian friend. Mike Tietz will probably still play with the friends around the world he met through Jamulus. So will Susan Alexander, who noted that playing online “might make it easier to rehearse” with local musicians when post-pandemic schedules get crowded again.

As recommended by musicians:

Below is information on several of the free programs with low lag times that allow real-time online music-making, as recommended by the musicians in this blog post. Most are audio only because displaying video images uses too much Internet bandwidth. All have Facebook pages where fans share advice.

Jamulus: In 2006, German music professor Volker Fisher created Jamulus to play with members of his rock band who moved to other cities, according to a SourceForge article. The Concordia Quartet has created how-to videos for Jamulus, as has avocational violinist Tom Frenkel.

JamKazam: In 2014, Austin, Texas, cloud-based-gaming executive David Wilson received a grant to develop JamKazam, which he was inspired to create in order to play with a brother in Dallas. A Go Fund Me campaign this year raised money to further lower the program’s lag time.

SoundJack: Dr. Alexander Carôt, a German professor of media computer science who plays bass in rock and jazz bands, created SoundJack in 2009 and has kept updating it. In 2020, New England Conservatory students began writing an English manual for it.

JackTrip: In 2000, Stanford University music professor Chris Chafe and colleagues developed JackTrip to let university music groups around the world perform together. In 2020, they began adapting the software to work on home computers.

Sonobus: This was created by musician and software engineer Jesse Chappell, Sonosaurus LLC, who has developed other music apps. Sonobus works using a computer, but, unlike some programs, it can also work on an iPhone or iPad that runs Apple iOS 11 or newer.

Jammr: This differs from the others in being “designed for improvising together to a chord progression,” not for playing a specific piece of chamber music. There is a free beta version, as well as a paid-for Premium version.

Amy Nathan is the author of Making Time for Making Music: How to Bring Music into Your Busy Life (2018), The Music Parents’ Survival  Guide (2014,  and The Young Musician’s Survival Guide (2008).

They may not be pros—but they’re recording artists now