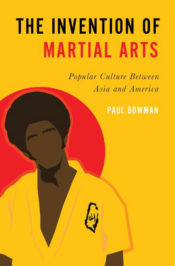 The Invention of Martial Arts: Popular Culture Between Asia and America

Bruce Lee was born in San Francisco on 27 November 1940, while his parents toured the US with a Hong Kong theatre company. As a baby, he featured in Esther Eng’s Golden Gate Girl. He then went on to become a major child star in Hong Kong. As an adult, he worked in US TV and film, before gaining international fame via three Hong Kong martial arts films and one US-HK co-production, Enter the Dragon. He died from cerebral oedema on 20 July 1973, at almost exactly the moment Enter the Dragon was released around the world.

Had he lived, Lee would have been 80 on 27 November 2020. This anniversary will be marked by countless people and innumerable institutions all over the world, from China to Russia to the USA, and almost everywhere in between. This is because, in the space of a few episodes of a couple of US TV series and four martial arts films, Bruce Lee changed global popular culture forever.

This is not the place to try to detail his life or the significance of his impact. We now have an authoritative biography: Matt Polly’s Bruce Lee, A Life (2018). Numerous documentaries, such as How Bruce Lee Changed the World, have clarified the extent to which he has functioned as a muse and inspiration in all kinds of activities, from art to music, sport to political activism. Countless scholarly works have engaged with his contributions to martial arts, film fight choreography, and ethnic identity politics. I too have weighed in on many of these debates with not one but two academic monographs on the cultural significance of his interventions.

So, what more is there to say about or learn from Bruce Lee?

In my latest research. I took the decision to try to look past him, to try to displace him from centre-stage. In doing so, it became clear that before Bruce Lee, Western media certainly had some ideas about what we now call martial arts. The complex relationship between the USA and Japan led to the frequent appearance, from the 1950s, of judo, jujutsu, and karate in Hollywood films. Britain too had an understanding of the spectacular potentials of Japanese approaches to combat, as is registered in the fight scenes of influential TV shows of the 1960s, such as The Avengers.

In fact, in one respect it is possible to say that representations of East Asian martial arts were flourishing in Western media and popular culture before Bruce Lee arrived. But, in another (more subtle but profound) respect, it is entirely incorrect to say this. This is because, prior to Bruce Lee, there was no overarching or synthesizing concept of “martial arts” in the Western lexicon. People may have practiced judo, jujutsu, karate, or other activities but such practices were yet to be grouped under the organising umbrella term “martial arts.”

In fact, the first appearances of the term “martial arts” in anglophone film are tied to Bruce Lee. In 1972’s Way of the Dragon (AKA Return of the Dragon in the USA), we hear Lee proudly proclaim, “and every day I practice martial arts!” Shortly after, the movie posters for 1973’s Enter the Dragon hail it as “the first American produced martial arts spectacular.” Within the film’s dialogue, the British character, Mr Braithwaite, speaks of “a tournament of martial arts.”

Before these occurrences, “martial arts” was a rare term, used mainly by specialists as one possible translation of the Japanese term bugei—which literally means “warrior art.” But after its appearance in and around these two films, it caught on like wildfire.

It would be incorrect to say that Bruce Lee invented the term. But before he popularised it, few were using it. Indeed, it was not until after its filmic appearance that even specialist scholars such as Donn Draeger began to use the term “martial arts” as an organising term, for example in the titles of books.

It was Bruce Lee who effectively introduced the term “martial arts” into the Western lexicon. This may not seem hugely significant. But what it also means is that he sowed the seeds of a new identity: people could henceforth identify as “martial artists.” Ultimately then, although it is true that before Bruce Lee people were practicing what we now call “martial arts,” it was only after Bruce Lee—and perhaps only because of him—that the very entity “martial arts” and the identity “martial artist” came into social and cultural existence.

Paul Bowman is Professor of Cultural Studies at Cardiff University. He is the author of many works of film, media and cultural studies, on popular culture, postcolonialism, cultural theory, and martial arts. He is founder and director of the Martial Arts Studies Research Network.