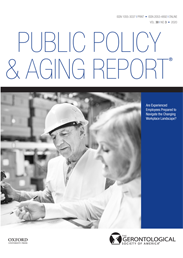 The ideas of generations and generational differences are ubiquitous. Millennials are characterized as job-hoppers; Baby Boomers are painted as selfish and materialistic. Media accounts blame generations for everything from changes in red meat consumption to the declining popularity of high-heeled shoes, doorbells, and paper napkins. Generations are likewise accused of disrupting normative ways of life and social institutions; these ideas are alluded to and supported by leaders, including politicians.

Considering public policy, references to generations and generational differences can be seen on various fronts, for example, stand alone think tanks exist to promote generation-specific policy issues. Regarding organizational policy, generations “gurus” and management consulting firms exist to help organizations develop policies to manage differences between workers of different generations. Airport bookstore shelves are lined with popular management literature describing how to deal with members of various generations at work. Relatedly, the National Academies were recently commissioned to produce a consensus study of generational issues in workforce management and employment policies and practices.

Although these observations are interesting, the most fascinating thing about generations is that they are completely made up—they do not exist objectively and there is weak evidence that they impact human behavior in the ways that we commonly assume that they do. Generations are social constructions that reflect a distillation of a variety of complex processes that we observe on a day-to-day basis through social interactions—aging, changing cultures, various contemporary contextual factors—into simple to understand terms. Thus, generations serve a sensemaking function; they are a relevant marker that allows us to make comparisons between people in a straightforward, if not overgeneralized, way. New generation labels are invented on a regular basis (“the COVID-19 generation” or “Generation Alpha”) and certain qualities are assumed to follow from characterizations of people into one generation versus another. Importantly, these labels are neither universal, nor agreed upon, in that there is actually a great deal of variability in the age ranges that define different generations, labels used to described them, and the defining characteristics purported to give rise to generations. As such, it is perhaps not surprising that people have a remarkably difficult time identifying which generation they belong to. Any point of comparison, especially those used to make distinctions between people, is ripe for scrutiny. considered holistically, the evidence for generations just does not stack up.

There are at least three fronts upon which the idea of generations falls apart when subject to closer scrutiny. Specifically, there exists no credible scientific evidence that generations exist as demonstrable units of study, that people can be classified into generational groups in a valid, reliable way, and that differences exist between such groups. Any one of these issues in and of itself would raise questions about various ideas associated with generations. However, the coexistence of all three issues is particularly damning to the concept of generations. Thus, despite their ubiquity, policy makers, organizational researchers, and managers should be extremely cautious about adopting ideas about generations and generational differences into their work. Although seemingly benign on the surface, policy decisions involving generations could run afoul of legal protections. For example, recent age discrimination complaints under the Age Discrimination in Employment Act have focused on organizational policies around generations as evidence for age discrimination.

With the evidence for generations lacking, how should we approach an understanding of age in the workplace, especially for developing policies around age at work? An alternative approach, better suited to understand the complexities of age and aging in workplaces, is the lifespan perspective. This approach conceives of aging as a continuous, lifelong process rather than splitting it into distinct groups to represent generations. In contrast to the static view of generational thinking, the lifespan perspective suggests that people’s developmental paths can change at any age, and that various shared and idiosyncratic influences impact development.

This perspective is well-suited for understanding aging in the workplace, because it adopts an individualized perspective rather than categorizing people into arbitrary generational groups. As such, the lifespan perspective represents an ideal framework for developing age-based policies in the workplace and beyond. In summary, the science of generations doesn’t support their existence and influence. Policy makers should avoid building policies around the misguided notions of generations and generational differences.

Cort W. Rudolph is an associate professor of Industrial & Organizational Psychology at Saint Louis University. His research focuses on a variety of issues related to the aging workforce, including applications of lifespan development theories, wellbeing and work-longevity, and ageism/generationalism. Cort is an associate editor for the Journal of Vocational Behavior, and he sits on the editorial boards of the Journal of Occupational and Organizational Psychology, the Journal of Managerial Psychology, and Work, Aging and Retirement. His work has been published in leading outlets, including American Psychologist, Journal of Applied Psychology, and Leadership Quarterly; his recent co-edited book, “Work Across the Lifespan” is available from Academic Press.

Rachel (Shelly) S. Rauvola, Ph.D. is an assistant professor of Industrial & Organizational Psychology at DePaul University. Shelly’s research focuses on occupational health as it relates to aging, trauma, and marginalization, promoting attention to the intersections between diversity, equity, health, and work in a variety of veins. Her research has been published in numerous academic outlets, including The Leadership Quarterly, Journal of Organizational Behavior, and Psychology and Aging.

David P. Costanza is an Associate Professor of Organizational Sciences and of Psychology at The George Washington University and a Senior Consortium Fellow for the U.S. Army Research Institute. David’s research, teaching, and consulting are in the areas of generational differences, leadership, culture, organizational performance, decline, and death as well as statistics and research methods. His work has been published in numerous academic journals and he serves on the Editorial Boards of the Journal of Business and Psychology and Work, Aging and Retirement.

Hannes Zacher, Ph.D. is a professor of work and organizational psychology at the Leipzig University in Germany. In his research program, he investigates aging at work and career development; work design and occupational health and wellbeing; as well as proactive behavior. His research is well-supported by competitive grants and funding from industry partners. He has published his work in top-tier international outlets, including American Psychologist, Journal of Applied Psychology, and Psychology and Aging.