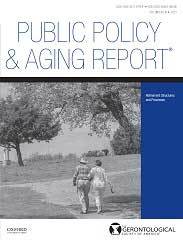 In March of 2020, for many Americans and older workers especially, what it meant to go to work changed in an instant. As some workers moved their offices into their homes, others had to go to work and face significant risks to their health each day. Older Americans faced more significant health risks than younger adults, leaving many feeling they had to walk away from work temporarily or permanently, a tradeoff of protecting their health despite a financial need to work. Others chose to enter retirement earlier than anticipated without a clear plan for this new phase of their lives. Given that older workers who lose their jobs face significantly longer periods of unemployment before being re-employed if they desire to work, older workers are likely to lead the way in reshaping what our post-COVID-19 work lifestyles look like.

It will be years before we can look back on the pandemic and fully evaluate the ways that our work lives changed in March 2020. However, the Great Recession that rocked the world during the last few months of 2007 set the stage for how we are defining work and retirement pathways today. For example, the gig economy became a way that everyday people could work without the structure of a typical job, and freedom to choose when and how much to work. It also led to accelerated declines in retirement savings, leaving more individuals without the means to leave work permanently despite reaching traditional retirement ages. How did these and other structural changes shape work pathways in later career stages?

My colleagues and I identified the most prominent work and retirement patterns from 2008 to 2014 among US older workers who left full-time jobs in 2008. Our research showed:

Although it is not known whether these post-Great Recession work patterns will persist in a post-COVID-19 world, there is good reason to expect that most older workers will remain engaged in paid work in some way for many years after traditional retirement ages. In fact, older workers report a preference for transitioning to less intensive paid work before retiring rather than a sudden departure. The problem is that we haven’t developed a clear infrastructure for these kinds of work transitions, so older workers have had to piece together post-retirement employment opportunities on their own. Although there are more options than there used to be, most older workers are unable to phase out of their full-time jobs, and, part-time work rarely includes much needed work benefits like health insurance and matching contributions from employers in retirement savings accounts. Older workers also face the challenge of having a higher likelihood of facing family care needs, and many employers do not offer jobs that provide flexibility for workers to carry out their jobs while also caring for their loved ones.

Although a post-COVID-19 world may push employers to take a new look at career models that include part-time work and flexible work options that allow older workers to stay employed, we need more intentional federal policies that incentivize employers to create non-full-time work options that support the career pathways. For example, a new optional federal retirement savings program could be created for non-full-time workers, and optional early access to Medicare could be provided for part-time workers aged 50+. Such programs may lead to new kinds of work lifestyles that are not only in line with the preferences and needs of older workers, but also among those in other phases of life who need or prefer non-full-time work career paths that allow them to obtain benefits, potential for upward mobility, and meaningful and challenging work.

October is National Retirement Security Month, a time to re-evaluate what retirement means in a post-pandemic world. Across the globe, the average age of the population is increasing. With a decrease in younger, working aged individuals in the US, delaying retirement as a means to retain older workers’ talents will become increasingly critical. Cultivating meaningful, alternative forms of work and retirement pathways has potential to ensure that older workers are valued as important ingredients in a vibrant economy and culture. As we transition to a post-pandemic society, now is the time to rethink the structures that differentiate work and retirement periods so that we can be more inclusive and more flexible in addressing the needs and preferences of all workers.

Dawn Carr is Associate Professor of Sociology at Florida State University and a Faculty Associate at the Pepper Institute on Aging and Public Policy. Carr’s research focuses on the factors that help bolster our ability to thrive in later life.