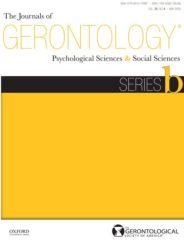 The Journals of Gerontology, Series B: Psychological Sciences and Social Sciences

“You never write…you never call….” The guilt-tripping mother is common stereotype in movies and TV. But how many adult children harbor feelings of guilt toward their aging parents? Who experiences this guilt, and why?

About one in five adult children experience feelings of guilt toward their ageing mothers, based on data from a nationally representative survey of 2,450 Dutch adults in 2015 who have a mother aged 55 or older. Feelings of guilt in the family have rarely been measured in a systematic fashion but researchers have long argued that guilt is not only something moral, but also a fundamental social emotion. Guilt refers to negative feelings that arise from having done something that is – or is perceived to be – wrong. Guilt is not the same as shame; guilt is the awareness that one has done something wrong, shame is the translation of that feeling to one’s self-image: the feeling of not being a good person. Guilt and shame are emotions that have been linked to depression and low self-esteem.

Adult children are an important source of support for their ageing parents. However, even at older ages, parents continue to support their adult children. The flow of support does not necessarily shift from downward (from parents to children) to upward (from children to parents) with age and for that reason, some children with older parents may feel that they are not doing enough to help. Feelings of guilt are associated with a lack of reciprocity in the support relationship. The less support people give to their mother, in comparison to how much support they receive, the stronger the feelings of guilt. With an increasing number of ageing parents in most high-income societies, demand for social and practical support from children increases and this may create more occasion for guilt to develop. It also seems that children who have strong norms about what people should do for their parents feel guilty more often. People set high standards for themselves, which in turn may lead to a feeling of not having done enough.

It was expected that infrequent contact would be associated with guilt but while people who had only monthly contact with their mothers feel guiltier, people with less than monthly contact did not report significantly more guilt than those with weekly contact. That primarily the monthly-contact group feels more guilt fits with a pattern of a good relationship that carries a cultural expectation of more frequent contact than can be achieved.

In psychological theory, guilt is often seen as a negative emotion that motivates positive behavioral change. This theory can also be applied to the mother-child bond. For example, guilt that arises from not visiting enough may motivate children to visit more, hence, reducing guilt. But guilt may also be reduced when parents exercise moderation in their downward support, letting the stream of support turn more quickly in the expected upward direction, from children to parents. Guilt is not always productive. When guilt arises from negative emotions such as anger and irritation, both of which are measured in this study, it is less clear which productive changes a person could make. Guilt that stems from ambivalence may therefore be perceived as more awkward. Adult children may visit their parents more often or offer more support when they feel guilty, but changing the way they feel about their parents is a different matter. This would require a change of expectations and a change in norms. Such mental and cultural changes are more difficult to achieve.

Featured image by congerdesign via Pixabay.

Matthijs Kalmijn is a professor of sociology at the Netherlands Interdisciplinary Demographic Institute in The Hague, Netherlands. He is an internationally recognized expert on intergenerational relations.

Why the holidays are the loneliest time for seniors