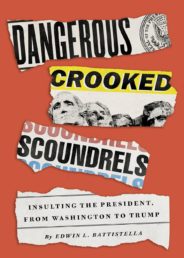 Political commentators and satirists love to mock Donald Trump’s verbal gaffs, his simplified vocabulary and vague, boastful speech. But if you judge his oratory by its effect on the audience, Donald Trump’s rhetoric, particularly with large crowds of enthusiastic supporters, is undeniably effective. People have studied the art of rhetoric for millennia – so how does a style that runs counter to all established advice work so well? His use of simple vocabulary and repetition help him connect with listeners. But central to Trump’s style is his use of catchy insults that foster an easy us-them mentality, with Trump and his fans on one side and basically everyone else on the other.

Donald Trump’s stylistic loadstar is the nickname, often composed of a target’s first name and an adjective. In 2016 there was Lyin’ Ted and Crooked Hillary. As the Trump administration has gone forward and the 2020 election is on the horizon we find the president tweeting about Crazy Bernie and Sleepy Joe. Biden was also, in the wake of reports of his handsy campaign style, Sleepy Creepy Joe.

It’s not just potential candidates who get tagged with adjectives: House Speaker Nancy Pelosi is Crazy Nancy and the Senate minority leader is Cryin’ Chuck Schumer. Former aid Steve Bannon gets the alliterative Sloppy Steve and Omarosa Manigault becomes Wacky Omarosa. Barack Obama gets the last-name treatment as Cheatin’ Obama, probably not so much out of deference but out of the difficulty of finding an adjective that works well with Barack. Former FBI director James Comey is referred to as Leakin’ James Comey, Lyin’ James Comey, and of course Leakin’ Lyin’ James Comey.

Physicality is also an element of the Trump style. Trump is a big fellow, except perhaps—famously—for his hands. According to his physician, Trump is 6’ 3” and 243 pounds. People who cross him become little or “liddle”: Little Marco Rubio, Liddle Bob Corker or Liddle Adam Schiff or, for Kim Jong-Un, Little Rocket Man (Lil’ Kim was already spoken for). Michael Bloomberg is sometimes Little Michael but also Mini Mike.

Trump also brings the business world mindset of winners and losers, successes and failures, to his insults. The media, of course, are “fake” and “failed” or “failing,” as are various individuals. Also popular are the adjectives “sad,” “dumb,” “loser,” and “nasty.” However, the President’s most common go-to word seems to be “total” or “totally”: people and things are “totally unqualified,” “totally dishonest,” “totally phony,” “total frauds,” and “total losers.” Donald Trump deals in absolutes and imagery, not shades of nuance.

Trump’s critics cast such insults as offensive and puerile, and as both symptom and cause of a decline in political discourse. Some assuredly are. But insults are a long-standing American tradition, and politics have never been polite. The question we might ask then is: are Trump’s insults any good?

If we look back at the history of political insults, we see that a good insult is like a caricature, exaggerating a perceived flaw and fixing it in the public’s perception with wit. Warren Harding’s speeches were referred to as “an army of pompous phrases moving across the landscape in search of an idea.” The phrase captured the public view of the man who called himself a “bloviator.” And a great insult should use images and phrasing that stick over time, often drawing on popular culture rather than playground bullying. When Congresswoman Patricia Schroeder tagged Ronald Reagan as “the Teflon-coated President,” she created a lasting picture of his seeming imperviousness to criticism. And quotable, memorable insults often embrace the poetry of language. They are playful as well as harsh and draw on double meaning, euphony, freshness, and surprise. Teddy Roosevelt’s quip that his predecessor Taft “no doubt means well, but he means well feebly” used repetition to contrast intention and performance. Hunter S. Thompson’s reference to Nixon as “a swine of a man and a jabbering dupe of a president” likewise brings together parallel insults, the first setting up the second.

What makes a Trump insult? There is none of Teddy Roosevelt’s casual erudition or John F. Kennedy’s witty repartee. Teddy referred to candidate Woodrow Wilson as a byzantine logothete, sending journalists to their dictionaries to learn that the logothetes of Byzantium were fiscal managers. To Teddy, Wilson was a mere bean-counter. And JFK, when told that Richard Nixon had tried to insult him as “another Truman,” responded “I consider Mr. Nixon another Dewey.”

How does Donald Trump measure up? His glossary of insults—total, lyin’, cheatin’, crooked, crazy, dumb, sleepy, sloppy, creepy, wacky, liddle, nasty failure—matches our current angry moment. They speak to people who don’t want to look things up in dictionaries. But they are the trick of the salesman not the statesman, replacing erudition with repetition and commentary with name-calling. Like his policies that pander to his fan base at the expense of all else, Trump’s insults speak to the moment, not to history.

Edwin L. Battistella teaches linguistics and writing at Southern Oregon University in Ashland, where he has served as a dean and as interim provost. His books include Bad Language: Are Some Words Better than Others? and Sorry About That: The Language of Public Apology. He writes a monthly column, "Between the Lines with Edwin Battistella," for the Oxford University Press blog.