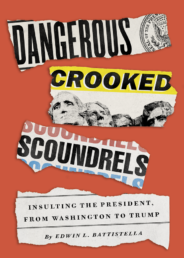 Lewis Carroll was a mathematically-inclined poet who published Alice’s Adventures in Wonderland in 1865 and Through the Looking-Glass in 1872 as well a number of poems and math and logic texts. Last summer I saw an outdoor production of Alice in Wonderland and it reminded me of all the linguistics in the two books. Carroll touches on questions of homophony, meaning, reference, syntax, pragmatics, and ambiguity in Alice’s various interactions or imaginings in her Wonderland.

Puns abound, as when the Mouse tells his story to Alice:

“Mine is a long and a sad tale!” said the Mouse, turning to Alice, and sighing.

“It is a long tail, certainly,” said Alice, looking down with wonder at the Mouse’s tail; “but why do you call it sad?”

This is followed by the tail-shaped poem, reinforcing the pun visually. There is much, much more, some of which is discussed in books like Marina Yaguello’s Language Through the Looking Glass and Martin Gardner’s The Annotated Alice (among many others).

When Alice meets Humpty Dumpty, he explains the apparent nonsense words in the poem Jabberwocky—giving meanings for slithy and mimsy and gimble and gyre.

But before that, the girl and the egg explore how things are named. In Plato’s Cratylus, Socrates was asked whether names were conventional or natural. Here, Humpty Dumpty plays the naturalist and Alice plays the conventionalist. Humpy asks Alice her name. When she tells him, he remarks that Alice is “a stupid name” and asks what it means.

“Must a name mean something?” Alice asked doubtfully.

“Of course it must,” Humpty Dumpty said with a short laugh: “my name means the shape I am — and a good handsome shape it is, too. With a name like yours, you might be any shape, almost.”

We see another bit of semantics soon after. In the twentieth century, the philosopher H. P. Grice expounded on the general maxims that conversationalists follow, one of which is to be relevant. Carroll gets at that too, when Alice tries to change the subject from names:

“Why do you sit out here all alone?” said Alice, not wishing to begin an argument.

“Why, because there’s nobody with me!” cried Humpty Dumpty. “Did you think I didn’t know the answer to that? Ask another.”

What Alice really wants to know is the reason he is sitting alone on the wall, but he answers irrelevantly. The egg ignores the conventional purpose of the inquiry and treats her question as a metalinguistic one—a riddle about the meaning of “all alone.” He does it again a bit later when he asks about Alice’s age:

“So here’s a question for you. How old did you say you were?”

Alice made a short calculation, and said “Seven years and six months.”

“Wrong!” Humpty Dumpty exclaimed triumphantly. “You never said a word like it!”

“I thought you meant ‘How old are you?’” Alice explained.

“If I’d meant that, I’d have said it,” said Humpty Dumpty.

Alice is following conversational conventions and Humpty Dumpty is flouting them. Later still Humpty Dumpty plays with morphology and with vagueness. When Alice notices his cravat, he explains that it was a gift from the White King and Queen.

“They gave it me,” Humpty Dumpty continued thoughtfully as he crossed one knee over the other and clasped his hands round it, “they gave it me — for an un-birthday present.”

“I beg your pardon?” Alice said with a puzzled air.

“I mean, what is an un-birthday present?”

“A present given when it isn’t your birthday, of course.”

Humpty Dumpty plays with the literal meaning of “I beg your pardon,” but he also creates a neologism: the un-birthday, which is any day not that is not your birthday. Combining un-birthday with present, the wily egg proposes that there are 364 possible opportunities for un-birthday presents as opposed to one opportunity for birthday presents. But the un-birthday days might result in no presents, so Humpty is engaging in some sleight of hand here. He claims victory anyway, saying

“There’s glory for you!”

Humpty Dumpty smiled contemptuously. “Of course you don’t — till I tell you. I meant ‘there’s a nice knock-down argument for you!’”

“When I use a word,” Humpty Dumpty said in rather a scornful tone, “it means just what I choose it to mean — neither more nor less.”

Humpty is suggesting that meanings are infinitely subjective and determined by the intentions of the speaker; Carroll mocks the absurdity.

At the outset of Alice’s Adventures in Wonderland, when Alice cries “Curioser and curiouser!” Carroll tells the reader, parenthetically, that “(she was so much surprised, that for a moment she quite forgot how to speak good English).”

All along in the Wonderland and Looking Glass, Carroll seems intent on making language curiouser and curiouser and making his readers more curious about it.

Edwin L. Battistella teaches linguistics and writing at Southern Oregon University in Ashland, where he has served as a dean and as interim provost. His books include Bad Language: Are Some Words Better than Others? and Sorry About That: The Language of Public Apology. His new book, Dangerous Crooked Scoundrels: Insulting the President, from Washington to Trump, will be released this year.