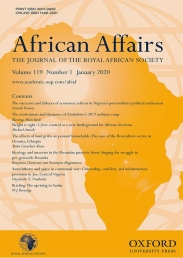 There are at least 19 African countries where the heads-of-state have overstayed beyond their term limits via (un)constitutional revisions: Algeria, Angola, Burkina Faso, Burundi, Cameroon, Chad, Congo-Brazzaville, Cote d’Ivoire, the Democratic Republic of the Congo , Egypt, Equatorial Guinea, Gabon, Guinea (which is trying once more in 2020), Rwanda, Senegal, Togo, Tunisia, Uganda, and Zimbabwe. But there are also 11 notable European countries that have no term limits at all on how long the Prime Minister or Chancellor could stay in office, which is probably why the Africans do not pay heed to lectures from the Europeans, because the latter do not believe in term limits themselves!

In all European cases (Belgium, Denmark, Germany, Iceland, Italy, Luxemburg, Netherlands, Norway, Spain, Sweden, and United Kingdom) the prime minister could remain in office for as long as their parliamentary majority is retained and the majority party wants them there, which is exactly what is currently practised in Angola, except that the Angolan constitution allows two maximum terms.

The presidential system concentrates power in that office, hence presidents do their utmost or damndest to exercise all the power at their disposal to the disadvantage of their opponents, and when besotted with that power, would do everything possible to keep it by extending term limits and enforcing the extension with winning elections. Hence elections have become the battlefield where both incumbents and aspirants fight accession to the throne, and as the saying goes, “might is right.” But the art of electioneering is now so fraught with tactics (boundary revisions, campaigning, vigilance on the manual ballot processes, vote buying, and even rigging), that the smartest and not necessarily the best candidate can win by sleight of hand. So the saying now, is “sleight is right.”

Stakeholders, including incumbents, opposition parties, electoral commission officials, civil society, and international monitors have now mastered the art of policing the manual ballot processes, hence the state of the art in elections cheating has shifted towards the cyber arena where government sponsors or opposition agents seek to avoid detection or apprehension via the application of various modus operandi ranging from, directly influencing electoral commission officials, to hacking and counter-hacking, in order to manipulate the electronic data aggregation of election results. Therefore, exercising control over the electronic aggregation process has become the new battleground and decider for who wins an election. It’s clear that, at least in Gabon, Ghana, Gambia in 2016, and Kenya in 2017, the incumbent wins the elections when he has control over the electronic vote aggregation exercise, and loses when not in control.

The Democratic Republic of the Congo’s December 2018 elections whereby the incumbent-controlled electoral commission cancelled voting in the opposition strongholds of Beni, Butembo and Yumbi, and subsequently announced results which were counter-intuitive to real time figures collated by some 40,000 observers of the Catholic Episcopal Commission, further demonstrates that whoever is in control of the data aggregation wins the election, and highlights the sleight is right milieu we are currently in. Even the colossal joint intervention of the African Union, the Southern African Development community and the International Conference of the Great Lakes Region was unsuccessful. Contrarily, recent irregularities highlighted by a Constitutional Court ruling over the May 2019 elections in Malawi, now known as the Tipp-Ex elections, included the use of the correction fluid on tallying forms, and posits a glaring example of an unsophisticated effort which proved unsuccessful, compared with the Congo’s more brazen commandeering of the election boundaries and results aggregation in the gizmo age.

We await Guinea-Bissau’s Supreme Court investigation over the disputed November 2019 presidential elections, to see what further challenges that might bring. In the meantime, African politics provides serious lessons to ponder. It may help to adopt an electronic or cyber solution which should forensically address all data entry errors in order to prevent rigging in the first place, or which could resolve such errors in the case of a dispute. However, countries must be willing to comply with the system once it is designed and mainstreamed.

Michael Amoah is visiting senior fellow at the Firoz Lalji Centre for Africa at the LSE and senior teaching fellow in the department of politics and international studies at SOAS.

The worrying future of trade in Africa

The price of precarious labour in contemporary warfare