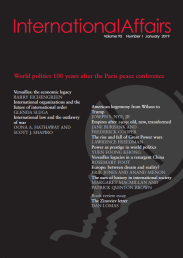 If there is one place in the world that we need to keep our eyes on for a better understanding of the dynamics of international affairs in 2020, it is the Indo-Pacific region. Here are four reasons why.

The Indo-Pacific can become a driver of peace and prosperity in the whole world providing the United States and China can work together. At the same time, the region can also become an epicentre of turbulence in world politics if these two major powers remain at odds. The early flashpoint in 2020 may have occurred in the Middle East (with the stand-off between the US and Iran) but expect the Indo-Pacific to regain prominence as a cause for concern as the year progresses. Whichever direction the region takes, without a doubt the effects will be felt across the globe.

Li Mingjiang is an Associate Professor at S. Rajaratnam School of International Studies (RSIS), Nanyang Technological University, Singapore. Kai He is Professor of International Relations at Griffith Asia Institute and Centre for Governance and Public Policy, Griffith University, Australia. Together they have edited the January special issue of International Affairs, ‘Unpacking the strategic dynamics of the Indo-Pacific.’