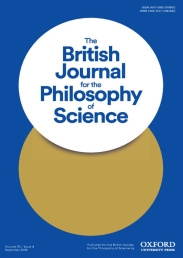 British Journal for the Philosophy of Science

The British Journal for the Philosophy of Science  is one of the leading international journals in the field, and publishes outstanding new work on a variety of traditional and 'cutting edge' topics, from issues of explanation and realism to the applicability of mathematics, from the metaphysics of science to the nature of models and simulations, as well as foundational issues in the physical, life, and social sciences. The journal seeks to advance the field by publishing innovative and thought-provoking papers, discussion notes and book reviews that open up new directions or shed new light on well-known issues.

You’ve probably heard that we’re living in the Anthropocene, a new geological epoch in which human activity is the dominant geological process.

If you’ve been attentive to discussion surrounding the Anthropocene, you probably also know that the Anthropocene Working Group, a panel of scientists tasked to make a recommendation as to whether geologists should formally recognize the Anthropocene, voted just a few months ago to recommend recognizing the new epoch.

And if you’ve been really attentive, you’ll be aware that, despite widespread adoption of “Anthropocene” talk, there remains some serious opposition to officially recognizing the Anthropocene. Some researchers think such recognition would be premature. Others call attention to the fact that humans have been transforming the planet for thousands of years, and there is no sudden, recent, tipping point in this process. Yet others are skeptical that our impact on the planet is as geologically significant as we, in typical human hubris, think it is. And socially-oriented environmental activists have argued that it is misleading to conceptualize an “Anthropo”-cene when the environmental crisis isn’t driven by humankind in general, but by a subset of industrialized cultures.

Official recognition of the Anthropocene, it’s often claimed, will help communicate the seriousness of the environmental crisis to the public.

This is wishful thinking.

Why would we think that a bunch of geologists adding another label to the geologic time scale would shift public opinion on issues like climate change?

Well, we might hope that people will be moved by the fact that a whole field of science has come to a consensus that human activity is radically altering the planet. Except that a whole field of science—climate science—has already come to that consensus, and that 97% consensus among climate scientists is well-publicized by activists, professional scientific organizations, and government agencies. Obviously, the public now accepts that consensus, right?

You know the answer: not in the United States, where the public is neither aware of the consensus nor in general agreement with it. Perhaps because of effective misinformation campaigns, repeated declaration of the consensus among climate scientists hasn’t had a radical effect on public acceptance of the facts of anthropogenic global warming. Given that fact, it seems foolish to think that a declaration by stratigraphers that we live in the Anthropocene will win over many members of the public to team Save the Planet. Such a declaration would be like declaring a consensus among climate scientists, except that much of the general public couldn’t even tell you what stratigraphy is, let alone why they should care what scientists who study it say.

This is not to say that communicating science to the public is pointless. On the contrary, good science communication is crucial to a functional modern society. But research on climate communication tells us the sort of science education that actually wins hearts and minds involves detailed causal understanding and compelling quantitative facts—not preachy labels.

But recognition of the Anthropocene doesn’t involve transferring any sort of detailed understanding of the mechanisms of anthropogenic geological change to the public. Nor does communicating these persuasive facts require official recognition of a novel geological epoch. Given the independence of what is involved in good science communication and what is communicated by the label “Anthropocene,” it seems that the argument for recognizing the Anthropocene on the basis of its science communication benefits is unwarranted.

Moreover, to the extent that the motivation for recognizing the Anthropocene is political, it might be a bad idea to treat it as inevitable. To proclaim that we live in the Anthropocene could come across as defeatist, along the lines of the “climate cowards” who have given up hope of climate mitigation and think we should throw our energies into adaptation.

Sure, it looks like we’re radically altering the planet’s geology, but what if we managed to rein things in? What if we pull our heads out of the sand and actually limit global warming to a couple of degrees centigrade? What if we put a halt to the incipient Sixth Mass Extinction before it comes to maturity? It’s still within our power to make the Industrial and Atomic Ages a blip in the geological record, rather than a permanent, epochal transformation of the planet. If we think of the Anthropocene this way, as preventable, there is room for hope.

In other words, the Anthropocene works better as a threat than a promise. To motivate action we should present it as an avoidable future. If we inscribe it forever into the geological time scale, it becomes immutable, past prevention. But that’s the opposite of what we want to be communicating to the public if we want them to act.

Carlos Santana is a philosopher at the University of Utah who works on engineering concepts in the environmental sciences to better facilitate collaboration between scientific fields and between science and policy.