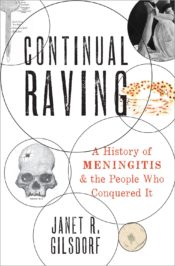 Continual Raving: A History of Meningitis and the People Who Conquered It

Scientific discovery is often a messy affair. It’s sometimes intentional, sometimes accidental, sometimes cluttered with error, and always complicated. The ultimate value of scientific observations may not be recognized for many years until the discovery emerges to shed new insight on old problems and become etched in the scientific canon. Such is the story of the conquest of meningitis, a devastating infection of the brain that is usually fatal if not treated.

The physician Richard Pfeiffer discovered one type of bacteria causing meningitis in babies during the Russian flu pandemic in 1892. For two decades Pfeiffer convinced the world that he had found the cause of influenza. He was wrong, but ever since, even after viruses were recognized as the true cause of flu, Pfeiffer’s bacteria, Haemophilus influenzae, still carries in its name residua of the early misperception.

Eventually antibiotics were discovered to treat bacterial infections. The first such drug used in America, Prontosil, was given in 1935 to treat, unfortunately without success, Katherine Woglom, a ten-year-old with meningitis. But this sulfa compound wasn’t the first antibiotic discovered. Before Prontosil was penicillin, identified accidentally in 1928 by the physician Alexander Fleming when he returned from vacation to find the bacteria on his agar plates contaminated with, and killed by, the mold Penicillium notatum. Fleming’s mold juice, penicillin, wasn’t the first antibiotic discovered, either. That honor fell to a substance emitted by Penicilium [sic] glaucum which, in 1874, contaminated the sterile vials in Dr. William Roberts’ experiments on bacterial spontaneous generation and killed the microbes. Roberts noted the phenomenon, with irritation, in a footnote to his scientific paper, and it remained hidden for decades.

In 1944 Oswald Avery and his colleagues discovered DNA as the carrier of inheritance. However DNA activity was first described in 1927 by Frederick Griffith, a shy, hard-working, British medical officer who studied the epidemiology of pneumonia in a dilapidated government lab, which also housed a post office. In the course of his work on Streptococcal pneumoniae, which also causes meningitis, he infected mice with live strains that had no capsule, along with dead strains that possessed a capsule. The bacteria he recovered from the mouse blood were live strains with a capsule. Something from the dead strains had transformed (his word) the live strains so that they then possessed a capsule. Griffith published this monumental observation in an obscure scientific paper and then moved on to other things. Sadly, before he saw how his work influenced genetics and the entire scientific enterprise, he and his colleague, McDonald Scott, were killed by a Nazi bomb in the 1941 London Blitz.

The mysteries of bacterial genes and their complicated ways fascinated Hamilton Smith, a brilliant physician who preferred lab work over patient care. When a new graduate student, Kent Wilcox, joined his lab, Smith directed Wilcox to transform phage P22 DNA into H. influenzae strain Rd. While control H. influenzae DNA moved into Rd with ease, the phage DNA just wouldn’t go. In trying to figure it out, they discovered restriction enzymes that digest foreign DNA and, thus, protect H. influenzae from being infected with phages. For this discovery, Smith received the 1978 Nobel Prize for physiology or medicine. Smith went on to explore how DNA got into H. influenzae cells and discovered that only DNA containing strings of nine specific nucleotides, called the signal sequence, could enter the bacteria. Smith then realized the actual reason Wilcox couldn’t make phage P22 go into strain Rd was because the phage DNA lacked the signal sequence. Thus, its failure to enter strain Rd had nothing to do with restriction enzyme digestion. This new understanding did not devalue the importance of his Nobel Prize-winning work with the enzymes at all; it merely emphasized the complexity of scientific discovery.

Meningitis is a horrid disease and physicians had long been frustrated with its poor outcomes (deafness, blindness, intellectual disability, seizures, and sometimes death) and with their inability to prevent it. Two pediatricians, David Smith at Harvard University and John Robbins at the National Institutes of Health and their colleagues, the chemist Porter Anderson and the pediatrician/immunochemist Rachel Schneerson, respectively, set about to rejigger the H. influenzae capsule into a vaccine that would protect babies from meningitis. The two research groups independently found a way to chemically join poorly immunogenic capsules to highly immunogenic proteins, thus tricking the babies’ immune systems into making antibodies as if the capsule were a protein.

Important scientific discoveries build on one another, like blocks in a pyramid, to achieve even more important discoveries. As a result, we now have vaccines that have nearly eliminated bacterial meningitis in children living in resource-rich countries.

Featured image credit: “Laboratory at the Central Cancer Research Labs’” by the National Institutes of Health, part of the United States Department of Health and Human Services. Public domain via Wikimedia Commons.

Janet R. Gilsdorf, MD, is the Robert P. Kelch Research Professor Emerita at the University of Michigan, where she cares for children with complex infectious diseases and formerly directed the Haemophilus influenzae research laboratory. She is the author of Continual Raving: A History of Meningitis and the People Who Conquered It (OUP,2019).