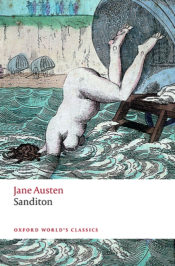 Unfinished works tease us. They come with baggage.  They cling to their authors whose lives, in turn, weigh heavy upon them. Why were they broken off? How might they be continued? With Sanditon, unlike The Watsons and Kitty, or the Bower, two other unfinished Austen fictions, the why is obvious: only months after beginning the new novel, Jane Austen died. The how is far less certain.

Austen left so little of Sanditon to work from—not quite 12 chapters—and that little appears so unlike her usual fictions. Since it was first published, as late as 1925, critics have been divided: is this last work a freak and a failure, distorted out of shape by the wasting disease destroying its author, or is it a bold new experiment, upsetting expectations by design? How to build on such a puzzling beginning? Should it be patched up and brought into line with conventional Austen or are there enough clues to create something startlingly different?

Andrew Davies, doyen of Austen screen adaptation, is known for sexing up, with large helpings of Regency naughtiness, what Austen hints at in the margins of her polite fictions. More than twenty years ago he reinvented her for screen, adding whole scenes to eroticize Mr. Darcy in his BBC miniseries of Pride and Prejudice. His latest venture, the Sanditon-inspired series for Red Planet Pictures/ITV takes far greater licence. This is, after all, Austen on holiday at the seaside, out of sight of her landlocked country villages with their stifling social codes. The year is 1817, a drawn-out Europe-wide war is finally over. A new world is dawning.  The mood is not just optimistic; it’s frenetic. In Sanditon, visitors in search of pleasure outnumber residents who, scenting fortunes to be made, are gambling all they have by investing in leisure.  Everyone hides a secret or nurtures a scheme.

Sanditon was made for film: all the more surprising, then, that Davies’s continuation is the first to go into full production. Indeed, the oddest of the many odd features of Austen’s final fragment is its ready cinematic style—its breezy seascapes; its panoramas of the South Downs, criss-crossed by walkers and carriages moving between village, beach, and new town; its use of fragmented vision and discontinuity.

Davies’s Sanditon is full of surprises: from hinted incest to skinny dipping, bare-knuckle fighting, and the requisite ball, held in a Sanditon House whose décor is more suggestive of Caligula’s parlour than the residence of the local great lady of East Sussex. Award-winning production designer, Grant Montgomery (he of Peaky Blinders and the 2019 film Tolkien), has created remarkable sets: the imperial opulence of Sanditon House; the gothic decadence of Denham Place; the John-Soanes inspired clutter of Trafalgar House, Mr. Parker’s home; and the half-built modern town itself. Fantasy sets, they are windows into the souls of their owners. And Grant, an Austen fan, has hidden throughout the production various Easter eggs, surprise tributes and visual references for other fans to spot.

This is all extravagant stuff. But is it too extravagant? Even in Austen’s fragment, we sense that several of the characters have interesting back stories to be brought into the light: the exotic Miss Lambe, the impoverished Clara Brereton, one of Lady Denham’s family of “politic and lucky cousins, who seemed always to have a spy on her.” Among continuations of the fragment, and there are fewer for Sanditon than for other Austen fictions, those that risk most come off best; those that deepen the air of mystery and danger that clings to this world of eccentrics cavorting by the sea.

The first to take up the challenge was Anna Lefroy, Austen’s niece, who would claim the novel originated in their joint discussions. Anna injects colour and social contrast, exploring the sinister potential in Austen’s comic tale. As a dark foil to the proto-hero Sidney Parker, she introduced Mr. Tracy, a political agent, who has been of service some years previously to Sir Edward Denham. Clara Brereton, made “cold, calculating, and selfish” by poverty, is revealed as a scheming fortune hunter with a plan to relieve Lady Denham of her money. In a reversal of Austen’s narrative, Sir Edward is to become her victim and not she his. But Lefroy’s nerve failed her and she abandoned her continuation. Only published in 1983, it is not widely known.

In A Cure for All Diseases (2008) (titled The Price of Butcher’s Meat in the United States and Canada), dedicated “to Janeites everywhere,” Reginald Hill burnished those elements of mystery and even crime that the fragment’s earliest readers (Anna Lefroy among them) detected beneath its surface. Hill’s novel features his regular police duo Dalziel and Pascoe. Superintendent Andy Dalziel is recuperating in the old-fashioned Yorkshire resort of Sandytown, “Home of the Healthy Holiday.” Charlotte Heywood is a psychologist with a skeptical and scientific research interest in alternative therapies. Mr. Parker and his business partner, the much-married Lady Daphne Denham, have plans to refurbish the town and local Avalon Clinic. Meanwhile, Lady Denham’s heirs circle greedily and hopefully.  Murder (to be precise, strangling and roasting) is not far away.

With precedents like these, can Davies really go too far?

Featured image credit: Women swimming in the sea at Brighton. Coloured etching by W. Heath. CC BY 4.0 via Wellcome Collection.

Kathryn Sutherland is the editor of Austen-Leigh's Memoir of Jane Austen and Other Family Recollections and Jane Austen's Teenage Writings for the Oxford World's Classics. She has created a digitial edition of Jane Austen's Fiction Manuscripts (2012), the print edition published by OUP in 2017. She is the author of Jane Austen's Textual Lives: from Aeschylus to Bollywood (OUP, 2005).