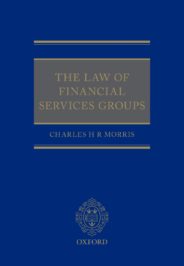 The Law of Financial Services Groups

It is a truism that Brexit will have a significant impact on banks and the wider financial services industry. The loss of passports by UK firms has received some attention from the non-specialist media, and is relatively well-understood. However, the loss of passports, significant as it is, is just one of many issues. Others have received no or little coverage outside the industry. In this blog, we will touch upon some of them. To do so, we need to step back and consider the very legal nature of a bank.

A bank—or, indeed, any company—has no corporeal existence. It exists only as a matter of law: specifically, the law of the place in which it is incorporated. Likewise, a bank may fail (or its failure may be managed or averted) pursuant to, or as a consequence of, the insolvency or resolution (bank rescue)  laws of such state.

But many banks are established in several states: specifically, where they operate through international branches. The legal status, and the laws governing the failure of, banks established in several different states is complex. The key issue is whether, and on what basis, the laws of a state in which a branch is established recognise, or override, the laws of the state in which the bank was originally incorporated. In this regard, we come across a fundamental difference between the treatment of branches of EU banks and third country banks within the EU.

Where a bank, incorporated in one European Union member state (the home state), operates from a branch in another (the host), the host state is obliged to recognise, and is unable fundamentally to interfere with, the insolvency and resolution laws of the home state. This principle does not apply to banks incorporated in a third country, with a branch establishment in an EU member state (and vice versa).

So, pre-Brexit, if a French bank has a branch in London, and that bank enters into a crisis, its resolution (or dissolution) would be dealt with under French law by the French (or Eurozone) authorities, without regard to, and without constraint or interference by, UK law. Post-Brexit, the failure of the UK branch of the French bank would be subject to both UK and French/EU law and regulation. The Bank of England would have powers over the branch, and the actions of the Eurozone’s resolution authority would not automatically be recognised within the UK. The reverse applies, of course, for the French branch of a UK bank.

All of which may seem of mere theoretical interest, only of relevance in the event of the (one would hope, rare) failure of a bank in the future, and therefore of very little consequence for the day-to-day business of UK/EU banks. However, the entire financial regulatory system is driven by what would happen in a crisis. Thus, many of the rules and regulatory policies that apply to banks throughout their day-to-day existence are shaped by what would happen in the event of their failure.

More fundamentally, the underlying political dynamic changes. In our example of a UK branch of the French bank, the French/EU authorities suddenly will become vulnerable to the action (or inaction) of the UK authorities (who, vice versa, will find themselves part-responsible for having to deal with a failure of the branch). This sets up a web of mutual dependence and vulnerability. Whilst the solution would lie in cooperation between EU and UK authorities, perfect and seamless cooperation between states can never be guaranteed. In practice, the result is the imposition of greater scrutiny and economic burdens, coming from both sides of the channel. The purpose of this blog is not to advocate for the deregulation of banks: the mischief here is the imposition of multiple levels of  superfluous, possibly conflicting, regulation ⸻ creating additional burdens and restrictions, without accompanying prudential benefits.

So far, we have discussed only bank branches. In reality, banks are established as groups comprising many different bank subsidiaries, under the common ownership of a parent company. Just as they do for branches, different rules apply to the EU subsidiaries of third country holding companies, than those which apply to the EU subsidiaries of EU holding companies. The various permutations (and thus the impact for EU subsidiaries of UK parents and vice versa) are so manifold that we cannot begin to examine them here: but they are of such significance that they can alter the entire shape, form, and manner in which bank groups are formed and operate, and create different kinds of tensions between the regulatory authorities either side of channel.

We have barely skimmed the surface. Everything discussed already is only too familiar to bankers and their legal and regulatory advisers. But what are the broader messages?

The first message is that the technical consequences of Brexit go far deeper than the headlines, and perhaps deeper than anyone who does not have specialist knowledge of a particular sector would even contemplate. What other consequences might transpire for businesses in sectors that are less well-resourced and prepared than the banking industry?

The second is that that the issues discussed in this blog illustrate one of the ironic consequences of Brexit: Brexit provides the means and motivation for greater interference by EU authorities over UK businesses. In an international economy, where one state takes back control, it is natural that states that have thus ceded control will react to their new position of vulnerability with suspicion, and may seek substitutes for their ceded control. Businesses will be caught in the midst of this struggle.