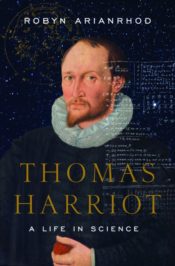 Thomas Harriot: A Life in Science

The enigmatic Elizabethan Thomas Harriot never published his scientific work, so it’s no wonder that few people have heard of him. His manuscripts were lost for centuries, and it’s only in the past few decades that scholars have managed to trawl through the thousands of quill-penned pages he left behind. What they found is astonishing—a glimpse into one of the best scientific minds of his day, at a time when modern science was struggling to emerge from its medieval cocoon.

It was a time when many still believed in magic, and most of the methods of science and mathematics that we take for granted today had not yet been developed. For instance, calculus had not yet been discovered, and there was no formal understanding of infinite series. But Harriot was one of the best algebraists of the early seventeenth century, and he managed to make a number of pioneering mathematical discoveries—including some that anticipated calculus and limit theory. These discoveries enabled him not only to make advances in pure mathematics, they also enabled him to apply mathematics to various practical and theoretical problems.

There are many reasons that Harriot never got around to publishing his scientific work, not least the dramatic times in which he lived. He moved in the most glamorous of Elizabethan circles—the charismatic Sir Walter Ralegh was his patron; but stars often fall, and when Ralegh fell from grace, Harriot’s fortunes suffered, too.

But at the beginning of their association, Harriot and Ralegh’s lives were full of excitement and hope. After graduating from Oxford, Harriot’s first job was that of live-in navigational advisor during Ralegh’s preparations for the first English colony in America.

He began his new employment in 1583, when England was a tiny player in maritime commerce and geopolitics. If Ralegh’s planned American trading colony were to materialize, his mariners would have to sail safely across uncharted oceans with the sky as their only guide, and Harriot provided them with the best training then available. Which was just as well for Harriot, too, because in 1585 he sailed to Roanoke Island with the First Colonists.

He saw the Roanoke people as friendly and ingenious, and found their way of life appealing in many ways. Tragically, few of his fellow travellers were so open-minded. When food supplies eventually ran low, and illnesses unwittingly brought from England struck down many of the local people, tensions between the visitors and their hosts reached breaking point. The First Colonists abandoned their experiment and returned to England—having killed the chief who had earlier invited them to share his land.

The disaster at Roanoke seems to have weighed heavily on Harriot. Although he continued as navigational advisor to Ralegh’s follow-up ventures, he never sailed to America again.

Instead, he began to turn towards more detached scientific pursuits. Initially, these included original mathematical research with navigational applications, but later, he explored science and mathematics simply for their own sake. He explored almost every area of the mathematics and physics of his day, and he made a number of breakthroughs that today we link with others’ names.

He found the law of falling motion independently of his contemporary Galileo, and used a telescope to map the moon and the motion of sunspots, again independently of Galileo. He discovered the law of refraction before Snell, produced a fully symbolic algebra and fledgling analytic geometry before René Descartes, found the secret of colour and the nature of the rainbow before Isaac Newton, and the rules of binary arithmetic before Gottfried Leibniz—to name just a few of his many achievements.

If only he had published all this work! Unfortunately for early modern science, he had little interest in fame. But the vagaries of a life spent working for controversial patrons didn’t help. First Ralegh, and then Harriot’s second patron, the earl of Northumberland, ended up imprisoned in the Tower of London on false charges of treason. Harriot himself came under suspicion. For instance, his renown as an astronomer led to the false accusation that he had cast a horoscope to aid the Gunpowder Plotters.

Yet despite all the ups and downs his curiosity remained undimmed. Four centuries on, he deserves to be celebrated for the decades he devoted to scientific discovery. Although this means he should take his rightful place in the scientific hall of fame, it is refreshing, at this time when we are awash with celebrities, that Harriot did much of his work just for the love of it.

Robyn Arianrhod is adjunct research fellow at the School of Mathematical Sciences at Monash University. She is the author of Thomas Harriot: A Life in Science.