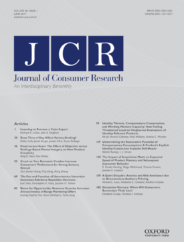 Founded in 1974, the Journal of Consumer Research publishes scholarly research that describes and explains consumer behavior. Empirical, theoretical, and methodological articles spanning fields such as psychology, marketing, sociology, economics, communications, and anthropology are featured in this interdisciplinary journal.

It’s notably very difficult for most people to talk about wine. Part of this may because wine is a fairly complex product. But the language itself may also be a barrier to understanding. John Cleese once satirized the pretentious oenophile in Monty Python: “Real emetic fans will also go for a ‘Hobart Muddy’, and a prize winning ‘Cuiver Reserve Chateau Bottled Nuit San Wogga Wogga,’ which has a bouquet like an aborigine’s armpit.” But actual terms commonly used to describe wine are often almost equally ridiculous.

Watch here as Master Sommelier candidate Ian Cauble describes a wine blind and identifies its grape variety, vintage and region almost perfectly. The analytic manner in which he does this process is based on the deductive tasting method.

Unfortunately Ian did not pass the exam the year the film was made. Many other students never even reached this point in their tasting career. Most fail.

But despite that, interest in becoming a taste master has never been higher.  Since 2011, registration for the Court of Master Sommeliers’ introductory course has jumped 71 percent, and registration for the certified exam is up 95 percent. There are still under 250 Master Sommeliers in the world, and candidates can expect up to a decade or more of intense training in advance of the grueling three-part test that, on average, takes three tries to pass.

Thousands paid to vicariously experience the Master Sommelier exam through the movie SOMM, whose success has spurred two sequels (SOMM 2 and SOMM 3) as well as launching an annual conference dedicated to the SOMM that started in 2015.

Consumers today are not content with merely knowing about a product, they desire mastery. Expertise can seen as a social cue for when it comes to high status products. Certification can also lead to professional opportunities and higher salaries. A list of wine certifications are available here.

Taste and smell, which combine to form flavor, are two of the senses that humans least understand (or trust). Constellation Brands research finds about a third of consumers state that they are confused about wine.

Learning to taste and appreciate the target product is key to become an expert in all taste domains. In wine education programs students are given a template for wine analysis (see grid from the Court of Master Sommeliers here ) and taught to learn the language of wine. This is supposed to make the otherwise ambiguous taste experience more concrete and reduceable to different attributes (color, aroma, taste, quality, etc.).

Beyond wine and the wine aroma wheel, other domains have developed similar systems such as cheese, coffee, chocolate, tea, whisky, and beer. Beer has its own certification system, as does cheese, whisky, tea, chocolate and there is even a water sommelier.

Part of the purpose of education is to provide experts a meaningful way to communicate to consumers about how a wine tastes. The problem is that verbal descriptors can only go so far when describing a perceptual experience like wine. The expert lexicon can distance the average consumer from the taste experience.

Media coverage on the “most irritating wine words” to consumers, which include terms like “firm skeleton,” “old bones,” and “nervy.” Some 55% of consumers said that many descriptors did not help them understand the taste of wine. Yet, instead of changing the terms, or way wine is described, publications like Wine Spectator have encouraged consumers to learn the lexicon.

But while the traditional verbal and analytic tasting notes are important for the novice taster, over time, to become expert, a different way of tasting is called for.

It may be useful to encourage consumers to harness their overall impression of the wine by thinking of it as a shape, and to have them draw it as an image. The drawing process allows consumers to pay more attention to their taste experience and notice subtle differences. This also allows consumers to think about flavor more holistically: The process of doing the drawing allows consumer to see whole experience of wine and how develops on their own palate, in turn allowing them to better connect what’s in the glass with the flavor they perceive. Using a visual sense to portray a lesser understood sensory modality is effective in learning as the image can serve as a mnemonic device for later memory. See an example below:

Some wineries try to use shapes/imagery as part of their marketing, see Domino wines, where the winemaker uses his shapes on the label. Gilian Handelman, Director of Wine Education for Kendall Jackson, has used shape drawing to portray differences in their wines. Elaine Chukan Brown (aka Hawk Wakawaka) has visual tasting notes that have been used for wine cartoons and labels .Even some wine apps like QUINI are moving in the direction of having visual tasting notes. The majority of the wine industry, however, still relies on verbal descriptors which fail to capture the holistic taste experience.

Thinking of wine in this new manner, as a shape, may seem unusual for consumers, but it has the potential to improve how people think about and order wine. In the future, we may order wines in restaurants not by asking for “full bodied” with “red fruit,” but having guests use Etch a Sketch devices so consumers can convey their taste preference to the sommelier.

The science behind ironic consumption

How the intention to share photos can undermine enjoyment