It is hard to believe how recent the verb hike is. Slightly more than a hundred years ago, The Century Dictionary (CD) found a slot for hike only in the supplement, and this is what we read there: “Also hyke; a widely used dialect word, parallel to hick, recently emerging into some colloquial use; prob[ably] orig[nally] an imitative word, parallel to hit, expressing a quick stroke or motion.” As “parallel” to it the CD mentions East Frisian [actually, Low German] hikken “thrust, push, punch,” and the reference is given to hick and hit. Hick “to hop, spring”, another regional word, we discover, is probably a variant of hip “to hop,” which, too, is regional and obsolete. With hit there are no problems: it is a borrowing from Scandinavian (Old Icelandic hitta and so forth), except that its origin in Scandinavian (Old Norse) is, alas, unknown. In 1907, the noted American etymologist Francis Asbury Wood called hike “a quick or sudden movement” slang.

The OED also included hike only in the supplement. The entry contained citations going back all the way to 1809, and, what is important, among the senses we find “to walk laboriously; tramp,” in recent use “to walk for pleasure”; then all the now familiar senses are listed.  With regard to etymology, we are invited to compare hoick “to lift up, often with a jerk,” said to be perhaps originally a local variant of hike. This derivation is probable, because the pronunciation of oi for i is widely known, and Standard English owes several well-established words to it, for example, boil and groin. Thus, we have hike, hoik, hick, and hit. The members of the trio hike ~ hoik ~ hick may well be cognates, but hit, with its final t, looks a bit suspicious. Besides, the word parallel in the CD raises questions. Does it mean “related to” or “resembling”? Dictionaries are fond of such evasive formulations.

The plot thickens once we invite Walter W. Skeat as an authority. In his lifetime, the “concise” version of his great etymological dictionary appeared in 1911, one year before his death. Hike is not there, but it turns up in the entry hitch, which is a piece of good luck, because we are most interested in the origin of hitchhike. Skeat compares hitch with Lowland Scotch hatch and hotch and then, without explaining the progress of his thought, adds “provincial English” hike “to toss” and hikey “a swing.” Finally, he notes that hook is not related to this group. It should not come as a surprise that Skeat compared hitch and hike. Although hitch turned up only in Middle English, if it existed earlier, it may have sounded as hickan or hyckan.

Ernest Weekley, the author of the only original one-volume English etymological dictionary of the post-Skeat era,  observed that, if in the group hitch ~ hatch ~ hotch the “main” verb was hotch, it could go back to French hocher “to shake,” known to English speakers from hotchpotch (or hodgepodge), a word the French  borrowed from Middle Dutch. Be that as it may, we witness a typical case of elementary, or primitive, word formation, which I have discussed in this blog more than once, first in connection with the origin of butterfly (see the post for May 21, 2007). Such monosyllabic verbs as dig, hit, hitch, kick, pick, peck, and put cannot be called sound-imitative (unlike grunt, bark, caw, meow, and so forth), but they have been aptly called symbolic.

People produce them almost instinctively. Hence the impression that such words come from nowhere. They often look alike in unrelated languages, so that, while dealing with them, the idea of cognates becomes vague, almost illusory. Old English had the verb hīgian “to strive, pant” (predictably, of unknown origin), the etymon of the obsolete Modern Engl. hie “to hurry, move quickly” (that is, “to push one’s way forward”?), and in the Westphalia dialect of German hick-hick “cheese worm” (a pushy creature?) has been attested. We may have a hacking cough, and we hiccup when we have a kick (!) in the throat or a catch in the voice: all such words render the same strong or spasmodic effort familiar from hitch and hit. That is why ingenious hypotheses of the origin of hike inspire little confidence. For example, it has been suggested that hike is a blend of hie and (wal)k—a most improbable idea, even though its author was Ferdinand Holthausen, a distinguished philologist. Those fond of etymological curiosities may also look up hit in Horne Tooke’s Diversions of Purley. Tooke derived numerous words from past participles. He treated hit in the same preposterous way. 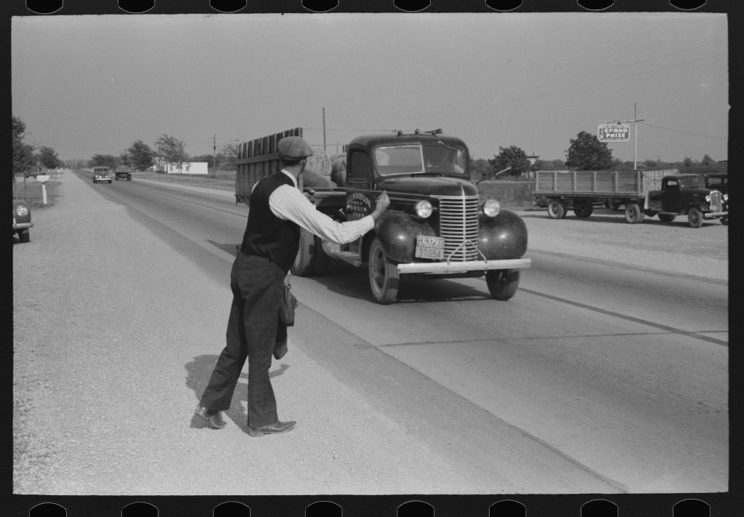 The Oxford Dictionary of English Etymology has no suggestions about the origin of hike; it only states that the verb is of dialectal origin. However, a dialectal or slang word also has a source. Hit ~ hitch ~ hike, hitch ~ hatch ~ hotch are typical examples of sound complexes people coin to make clear the idea of striking, jerking, and the like. It does not seem unreasonable to explain hit, hitch, hike and the rest as symbolic and feel satisfied. Such verbs and even nouns have existed forever. Yet we tend to treat old words of this type with undue reverence. For example, in Gothic, a Germanic language, recorded in the fourth century, haiftsts “fight, quarrel” turned up. Its origin is, predictably, unknown. Francis A. Wood suggested that haifsts might belong with hoist, hike, hick “to hop,” and a few others. This etymology does not look fully convincing, but it is not indefensible.

Considering how many examples of hike Joseph Wright gives in his English Dialect Dictionary, we may be certain that this verb never disappeared from British dialects. It must have been brought by the colonists to the New World and stayed dormant there for a long time. How and why it suddenly surfaced, became universally known and even respectable remains unclear. Around 1870, it was American college slang for “to move vigorously” (“You’ve got to hike around, and fling some style inter your victuals”). When hike reached the general public, it had the status of an Americanism, but, like numerous other so-called Americanisms, it was coined in England. In the street argot of British tramps, hike flourished long before it was noticed by the educated part of the world.

In 1930, there was a brief exchange about the verb hike in Notes and Queries. A correspondent from Kent wrote: “This is still used hereabouts, meaning to set a dog to work in a hedge. It is equivalent to ‘hie in’ [!].” It was also suggested that probably another form of hike “is the ‘hoick over’, when hounds are pushed on over a woodland ride, or a low fence, or encouraged to draw a cover.” There is a good deal of historical and etymological justice in the fact that someone in the second decade of the twentieth century coined the verb hitchhike and that it conquered the world. In principle, hitchhike is a tautological compound, with both elements meaning the same, as in pathway (compare the post for October 7, 2009 and numerous tautological phrases of the first and foremost, kith and kin, and safe and sound type). Hike might have been little known, but if one hikes with hitching, the effect is guaranteed. People realized the symbolic strength of the coinage, and, as we can see, the word has come to stay.

Numerals, especially the number nine, in folklore and language