Last week (January 9, 2019), our hero was Robin Hood, and I promised to write something about the bird robin. For some reason, in oral tradition, the robin is often connected with the wren. In Surrey (a county bordering London), and not only there, people used to say: “The robin and the wren are God’s cock and hen” (as though the wren were the female of the robin, but then the wren is indeed Jenny). In Wales, the wren is also considered sacred. This association with God (note also: the wren is Our Lady’s hen) did not prevent some people in England from chasing and killing the tiny and perfectly innocuous creature. The same holds for Ireland, where on St. Stephen’s Day (December 26; a public holiday) people chased, captured, and killed the wren wherever it could be found, in commemoration of St. Stephen, who was stoned to death.  (I have read that now the killing is no longer practiced.) According to the best-known version, the ceremony goes back to a battle between the Irish and the Vikings, in which the Irish were prevented from surprising their enemy by a wren: it tapped upon the drum or the shield of the Scandinavian warrior (just picking up crumbs and meaning no harm) and woke him up. But the rite is probably much older and has nothing to do with the Vikings, as shown by the date: the day after Christmas ushers in the New Year, while the wren, for some reason, became the symbol of the old one.

The robin is called robin redbreast. The color of its plumage is “explained” in numerous etiological tales about fire bringing. Strangely, some such tales also revolve around the wren. It has been suggested that perhaps the rare Regulus ignicapilla, fire-crested wren, gave rise to this folklore, but that bird’s patch is bronze rather than red. Both birds are said to have performed heroic deeds. The wren from Normandy volunteered to be the bearer of the heavenly fire but got its feathers burned off in accomplishing the task. The other birds gave each a feather to replace the lost one, and only the owl refused to do so. That is why the owl, despised and hunted by all the other birds, has been hiding in the daytime. From a Welsh legend we learn that every day the robin carries a drop of water to quench the flame of the infernal pit and, and it is this flame that scorched its feathers. 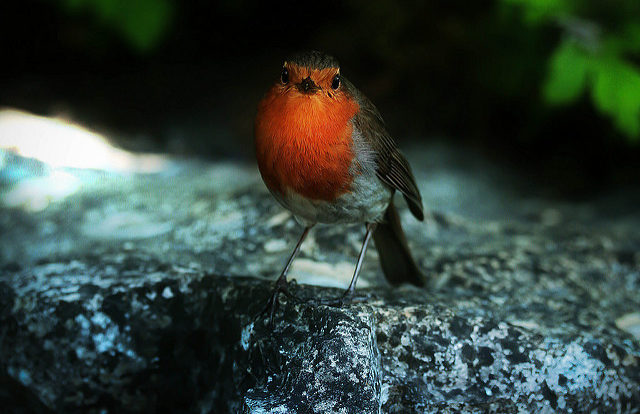 The association between the two birds is old, for Shakespeare makes Lady Macbeth say in Macduff’s castle: “…the poor wren,/ The most diminutive of birds, will fight— / Her young ones in her nest—against the owl” (IV, 2: 9-11). And later, Macduff, on learning that his wife and children have been murdered, develops the same avian metaphor: “All my pretty ones? / Did you say all? O hell-kite! All? / What? all my pretty chickens and their dam? At one fell swoop?” (IV, 3, 215-18). In one fell swoop, Shakespeare’s coinage, has become proverbial (the obsolete adjective fell, related to felon, means “fierce, cruel”; the Romance root fel– is of undiscovered origin).

However, neither the wren nor, most probably, the robin got their names from their color. I am sorry to say that wren is almost hopelessly obscure, even though it already occurred in Old English. The word has two probable cognates, but their existence provides little help. Etymologists’ conjectures are rather uninspiring. Yet, if you want to enlarge your everyday stock of words, I may remind you that the wren is a dentirostral passerine bird of the genus Troglodytes. Unlike other troglodytes, wrens do not dwell in caves; they only tend to forage in dark crevices. By way of consolation, Wren has a perfectly transparent origin: it means Women’s Royal Naval Service.

Robin, which appeared in English texts in the middle of the sixteenth century, looks deceptively transparent. However, it has baffled generations of etymologists. Two ideas come to mind. First, that the bird name must be identical with the proper name Robin. Now, Robin is a nickname for Robert, and -in a so-called diminutive suffix. Although not very common, this suffix does occur every now and then, as in piggin “a small pail,” hoggin “a small drinking vessel,” and dialectal buggin “louse,” to mention a few, while dobbin “horse” is a diminutive of Dob (Dobbin must be familiar to many from Thackeray’s Vanity Fair, in which Dobbin of Ours is an important character; if you don’t remember who he was, reread Chapter V: it will make your day). Several parallels come to mind: jackdaw, Jenny wren, magpie (mag + pie), and a few others from English and French.

Greenough and Kittredge say in their otherwise excellent 1901 book Words and Their Ways in English Speech: “…robin is of course a diminutive of Robert.” Yet this is only an intelligent guess; otherwise, they would not have said of course (I keep repeating year in, year out that of course, surely, certainly, and the rest in works dealing with reconstruction mean only that the authors have no evidence to support their claim). The conjecture is that the word group Robin redbreast was at one time shortened to robin. But Jenny wren, jackdaw, and magpie never turn into jack, jenny, and maggie, though somebody in one of Catherine Potter’s tales says that, after all, a magpie is a kind of pie. I believe that tracing robin to Robin is wrong, even though the most authoritative dictionaries say so.

The other tempting idea is to derive robin form some word meaning “red.” After all, our fire bringer does have a red breast. The Old English name of the robin was ruddock, that is “a (little) ruddy bird,” a gloss on Latin rubisca. However, robin does not sound like any word for “red.” In Old French, the bird was indeed called rubienne, and robin may have been a folk etymological alteration of that noun, but the middle of the sixteenth century is a rather late date for borrowing a popular word from French. An additional difficulty consists in the fact that Engl. robin is not isolated. Originally a Scots word, it has cognates in Dutch (robintje) and Frisian (robyntsje and robynderke “linnet”). Should we posit a borrowing by all three languages from Old French? Such a process would not be unthinkable, but what was so attractive in the French bird name?

Non-specialists may not be aware of how thoroughly the origin of bird names has been explored and how many excellent articles and books have been written on this subject. With some trepidation, I would like to offer a different etymology of robin. I have once written about this word but have not seen any discussion of my idea. Of course, somebody may have refuted it in an obscure footnote. If so, I’ll be grateful for the reference.

More about the subject will be said next week.

On Robin and robin