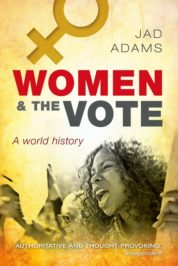 Women and the Vote: A World History

These are important parliamentary milestones but the lauding of campaigners has given priority to organised women’s movements in gaining the vote. This edges women’s suffrage off the main stage of world politics and makes it a pressure group issue; interesting enough in its way, but of no great consequence in the halls of power.

This emphasis on campaigners, whether militant or constitutional, takes away from the more profound change wrought when women got the vote.

In international terms, enfranchisement in the UK and US was no great advance: seven nations had enfranchised women in the years before 1918; 20 countries in the years before 1920. At the start of 1893, no women had the vote for a national parliament anywhere in the world. By 1963 almost all women had the vote, whatever political system they lived under, and it was considered a mark of backwardness if a nation had not enfranchised women. What is evident here is not a national movement dictated by local campaigns, but an international gender revolution.

The most important date is 1949, when the populous nations of China, India and Indonesia enfranchised women; that was 40 per cent of the world’s female population.

What was driving these enfranchisements? The great movements of women’s suffrage, where tens of nations enfranchised in a few years, are associated with national solidarity and re-organisation. This holds true from revolutionary Russia through war-shocked Europe and North America to the revolutions in India and China, to the emergent nations in Africa up to the tentative democracies in Arabian states during the War on Terror.

The lobbying, demonstrating, rallying, letter writing, and perhaps even militancy of women’s suffragists and their allies helped to a greater or lesser degree; but the most important factor in women’s gaining the right to vote was the re-evaluation of nationhood in terms of citizenship. This happened through great national upheavals.

The existence of an organised feminist movement was a generally helpful but not essential factor. In some countries (notably the US) vigorous feminist organisations deterred erstwhile supporters by militancy or by unrealistic proposals as to what the vote would achieve in such fields as sex regulation and alcohol prohibition. In some countries the women’s vote was granted with no major feminist agitation. In Norway the suffrage movement was feeble – though the women’s vote was still granted there earlier than in Holland with its massive suffrage movement. This is not to say suffrage movements were uninfluential, but other factors were more important; American suffrage campaigner Carrie Chapman Catt lamented that it seemed “the better the campaign, the more certain that suffrage would be defeated.” Sometimes they just stirred up the opposition.

While organisations and individuals made real contributions, particularly in setting the terms for enfranchisement and keeping the issue in the public mind, mega-national issues played a greater part. The most important factors making for women’s suffrage were national crises such as war or nationalist uprisings (often, of course, happening at the same time). The first great bulk of countries enfranchised women during or after the First World War regardless of whether they were on the winning or losing side, or even combatants. A struggle for national self-determination such as that undertaken by Finland and India made for an ultimately painless enfranchisement for women. Invasion and civil war had the same effect in China. There were countries in which there was no association with war, notably the first enfranchisements in New Zealand and Australia, though these were still a matter of national self-definition.

Plotted as a graph, the world picture of women’s suffrage shows rises and falls in alignment with the great wars of the twentieth century: a close relationship exists between the end of the First and Second World Wars and the number of enfranchisements of women in different nations.

There is a pronounced but less clear relationship with the height of the Cold War in the late 1950s and early 1960s when a large number of new nations enfranchised women. In the last phase, the relationship of the global War on Terror with late enfranchisements of women in Arab states is inescapable. Enfranchisements between wars are seen to be slow and sporadic, mere dots on the graph of women’s enfranchisements, compared with the solid blocks of nations that cluster round the periods of war.

The repositioning of women’s suffrage in terms of national identity, nationalist movements, and war gives a perspective that puts gender at the heart of national and international politics.

Jad Adams is a Research Fellow at the School of Advanced Study, University of London, specializing in the nineteenth and twentieth centuries. His books include major biographies of Tony Benn, of Gandhi, and a composite biography of the Nehru dynasty. A frequent reviewer of books for national publications, his latest book is Women and the Vote: A World History.