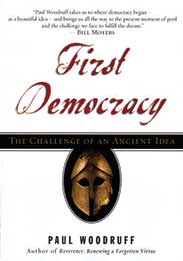 First Democracy: The Challenge of an Ancient Ideal

A group of partisans burst into the Council Chamber and summarily killed the leaders of the opposing party, which represented the majority. The year was 427 BCE and the place was Corcyra, modern Corfu. The parties were divided over whether the Demos—the people–or the Oligoi—the wealthy few—should rule, as well as over specific issues of justice and foreign relations. Our source for this, Thucydides, wrote that the cause of the civil war was “the desire to rule out of avarice and ambition.” Both sides plunged into atrocities as civil war spread out and continued to flame until the leaders of the Oligoi had all been slaughtered. Civil war is a colossal failure of democracy.

In Corcyra, this failure began long before the killings, with an abuse of justice. What is democracy? Pundits have been writing recently that democracy is majority rule, but that is wrong, dangerously wrong. Corcyra came apart because the majority was using legal machinery to abuse its wealthy opponents, the Oligoi. And those opponents saw no way apart from violence to defend their interests. Majority rule was ultimately to blame for this civil war.

“Pundits have been writing recently that democracy is majority rule, but that is wrong, dangerously wrong.”

The ancient Greeks found their way to create a form of democracy in Athens after a period of rule by tyrants. They were able to do this because they were developing a culture that was friendly to democracy. Central to this culture was their devotion to the rule of law—the idea that no one is above the law, and that no one should be able to use wealth or influence to skirt the law. I admit that the culture of Athens was flawed in many ways: It permitted slavery, and it kept women out of political life. Nevertheless, we have something to learn from the ancient Greeks about democracy. For most of the first century of democracy in Athens, civil war remained a threat, as the wealthy remained discontented. But after the final restoration of democracy in 403 BCE, the system was reformed and worked well until it was put down by the mighty army of Alexander the Great.

“The rule of law .. stands between democracy and the tyranny of the majority. … Beyond law, the culture of a democracy must be inclusive.”

What is essential for a culture to be friendly to democracy? I have already mentioned the rule of law. Also important is a concept of the people as a people. For the people to rule, and to do so in their interests as a people, they must think of themselves as a people. The Athenians had the advantage of a shared history, a shared religion, and shared civic rituals. We Americans have a shared history (up to a point) and a few shared rituals (such as watching football). But our racial divide has left us with different histories and, for many of us, a fractured sense of what it is to be American. Our greatest challenge is this: to develop a widely shared sense of what it is to be we the people.

We have other challenges. Systemic inequality is not compatible with democracy. We are beset by vast inequalities of wealth and opportunity, as well as by inequalities in basic needs such as housing and health care. Our system of education fails to prepare many of our young people for meaningful lives. And I believe our education fails altogether to give Americans an understanding of the various forms that democracy can take—most of which are superior to the form available under our deeply flawed constitution. No form of government is perfectly democratic in practice. Democracy is an ideal, a dream we should try to make real. In my book on democracy, I concluded by asking whether we Americans were ready for democracy. I concluded, sadly, that we were not. That was in 2004. Where are we now? Are we any more ready for democracy than we were then? Or is the danger of failure greater now?

Paul Woodruff is the former Darrell K. Royal Regents Professor in Ethics at the University of Texas at Austin. He is the author of First Democracy, the Challenge of an Ancient Idea (OUP 2005), Reverence (OUP 2014), and The Garden of Leaders (OUP 2019).