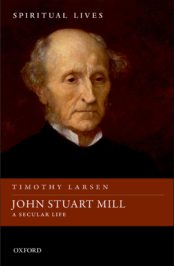 Oxford University Press: Your most recent book, John Stuart Mill: A Secular Life, is in OUP’s Spiritual Lives series and is essentially a religious biography of Mill. What is the best one-word description of Mill’s religious identity?

Timothy Larsen: “Complicated,” I guess. He has been called everything from an atheist to a mystic. One scholar has even claimed that Mill saw himself as the founder of a new religion. Mill himself once observed that his reverence for Jesus Christ gave him the right to call himself a Christian.

OUP: But did he believe in God or not?

TL: Mill decided that strictly in terms of proof the right answer to that question of God’s existence is that it is “a very probable hypothesis.” He also thought it was perfectly rational and legitimate to believe in God as an act of hope or as the result of one’s efforts to discern the meaning of life as a whole.

OUP: Did he go to church?

TL: Yes, surprising often. He attended the Church of England regularly as a boy. At the end of his life, he was a supporter of the Protestant church in Avignon (where he lived). His best friend there was its pastor and Mill gave it a large financial contribution annually. The last public meeting he ever attended was in that church. At it, he accepted a position as an honorary member of the executive committee of its charity which supported religious schools. Whenever Mill visited a city, whether in England or abroad, he was keen to attend a worship service in its principal church. On the continent, he would sometimes wait around in a church for hours hoping that there would be a service. In 1856 he actually left his adored wife at home and took lodgings in Birmingham so that he could attend all of the Holy Week services at St Chad’s.

OUP: You say that he did attend church regularly as a boy, but I thought Mill claimed that he was raised without religion?

TL: He did claim he was raised “without religious belief, in the ordinary meaning of the term,” but it turns out to be a rather misleading claim, especially the way that we think of what it is like to grow up without religion today. The part that is true is that his father was a religious sceptic and he taught his firstborn son to be one as well. Mill, however, famously never mentions his mother in his Autobiography and she turns out to have been a Christian from beginning to end. Moreover, Mill’s sisters were also devout Christians throughout their entire lives. This is truly remarkable when one recalls that they were all entirely homeschooled by James Mill and John Stuart Mill himself. Clearly, Mill’s home life was not as secular as that claim has led people to believe.

OUP: Are people then wrong to think of Mill as a famous rationalist?

TL: No, no, he is a famous rationalist. He had an extraordinary mind for logic and his textbook on that subject was and is justly celebrated. Unbelievers tended to assume that these stances are in opposition to religion but, of course, religious people do not think that reason and logic are not on their side. Orthodox Christians were enthralled with Mill’s Logic and were quick to praise it and to assign it in their schools. In his posthumously published essay, “Theism,” Mill made the case for hope in God and in Christ. Mill’s disciple, the agnostic John Morley, fumed that it was “profoundly irreconcilable” with “the scientific principles which Mr. Mill inculcated,” but, once again, Mill himself did not think he had abandoned those principles. In a parallel and interrelated way, Mill was a rationalist but he was also a Romantic.

OUP: As you were doing the research for this book, what most surprised you?

TL: How religion kept leaping out at every turn. That fact tells us as much about what nineteenth-century Britain was like as it does about Mill, but it is striking nonetheless. For instance, Mill’s closest intellectual companion in the later years of his life was his stepdaughter, the feminist Helen Taylor, who also became his literary executor. She was extraordinarily pious when young—again, with no apparent encouragement from any adult in her life—and, it would seem, was received into the Catholic Church toward the end of her life. Mill’s best male friend was a clergyman. Mill would praise works of orthodox theology. Every chapter of the book has additional evidence along these lines that I, for one, often found startling.

OUP: Isn’t there a danger that you have become so enamored with your revisionist thesis that you are making Mill out to be more religious than he actually was?

TL: Yes, I see that possibility. And, as I said, the real answer is: it’s complicated. If I were to push back against your question, I could rightly say that “religion” was actually a positive category for Mill. He would have been quite happy to be thought of as ‘spiritual’ or ‘religious’. Still, it is certainly the case that he was suspicious of—and, to a degree, opposed to—dogmatic, organized religion. This means that he was much less religious the way people usually think of that term then the vast majority of nineteenth-century Britons. Still, I think the thing that people today really need to grasp is just how deeply religious Victorian culture was and how much that influenced even a famous sceptic such as Mill. John Stuart Mill was keenly aware of the way that he was not an orthodox believer like most people at that time but, if we want to understand Mill aright, we need to see that he was much less ‘secular’ than people today think he was.

Timothy Larsen is McManis Professor of Christian Thought at Wheaton College, Wheaton, Illinois, and an Honorary Research Fellow at the University of Wales Trinity Saint David.