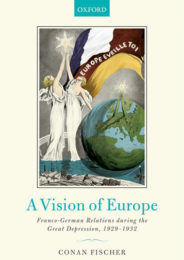 A Vision of Europe: Franco-German Relations during the Great Depression, 1929-1932

In the wake of the November 11, 1918 armistice between Germany and the Allies, high-minded idealism confronted a mélange of very unpleasant realities. All the belligerents had claimed to be fighting for a noble set of aims, and the United States President, Woodrow Wilson, went further. He proposed the creation of a supranational agency, the League of Nations, to govern international relations in a pacific age of transparent, altruistic diplomacy.

The peace settlement, Wilson anticipated, would incorporate these universal values, which encapsulated the moral rectitude of the Allied coalition. Meanwhile, for the defeated Central Powers, Wilson’s vision appeared to betoken a moderate, even visionary, peace. However, given the scale of the slaughter, endured at ruinous expense, it was never going to be so easy. Added to which, propaganda on both sides had excoriated the enemy as perfidious, even demonic. This fueled popular demand for vengeance and reparation on the Allied side, but simultaneously persuaded the defeated Germans that their country was not deserving of punishment. Any German government that admitted otherwise risked being branded treasonous and would always struggle to gain parliamentary approval for compliance with the peace terms.

As for the peace treaties, those with Germany’s allies were hastily drafted as afterthoughts to the German treaty and resulted in Hungary and Austria losing swathes of Magyar and German-speaking territory. These losses were bitterly resented. In Turkey’s case the treaty was overthrown by force of arms. However, the key treaty, Versailles, was with Germany. Unfortunately, but probably unavoidably, this settlement amounted to a brittle compromise, hard fought behind closed doors, between the major Allies; a process which perforce excluded Germany from the negotiating table, yet also left France particularly dissatisfied. Of all the Allies, France had made the greatest sacrifice yet it remained vulnerable to a future German military revival. But the same treaty came as a profound shock to the Germans, for rather than gaining admission to a benign new international order, they were abruptly confronted with the harsh reality of defeat.

Versailles, then, has sometimes been branded as a ceasefire that barely endured for two decades rather than offering any realistic prospect of a durable peace. That the US Congress refused to ratify the settlement did it few favours. However, some historians have been more forgiving, arguing that given the circumstances, Versailles was a reasonable achievement. Enforcement, they continue, was the key, but in the face of German recalcitrance and Allied bickering, enforcement was found sorely wanting.

However, perspectives change if Franco-German relations are placed at the heart of the story. As the German Ambassador at Paris, Leopold von Hoesch, put it in June 1930:

What does Germany mean to London, Rome, or Washington? A great power among several great powers, alongside many other important issues and interests. What does Germany mean to France? The focal point of French policy, against which all other issues play second fiddle. It does not appear very different from a German point of view when it comes to ranking the French problem.

The fundamental synergies of this key relationship were arguably so deep-seated that not even twelve years of Hitlerism could destroy it. On the contrary, since the Second World War we have witnessed the creation and cementing of the Franco-German axis, which has served as the cornerstone of European integration and a stable and essentially peaceful European order.

This special relationship, where vital national interests are pursued through a process of transnational collaboration, was founded on deep-seated synergies between the French and German economies, with particular focus on the two countries’ heavy industrial sectors (coal and steel) and, from the mid-1920s, on France’s increasing financial strength. French capital offered to kick start Germany’s potentially powerful, but chronically undercapitalised economy. French and German policymakers and businessmen also began to question the inherent viability of freestanding national economies. Only a more integrated European economy would be capable of competing with the continental giants of the USA and, potentially, the Soviet Union.

In May 1930 the French Foreign Minister, Aristide Briand, submitted plans to the League of Nations for a European Union, which attracted qualified German support. In September 1931 Franco-German collaboration took a major step forward when the two countries signed the Berlin Agreement. This provided for a bilateral customs union and wider economic integration, eventually to be extended across the continent. Post-war historians and politicians were slow to recognise the importance of this template for contemporary European integration, not least because these inter-war initiatives failed. The political and economic traumas of the Great Depression proved stronger than the efforts to respond positively to the challenges of the day. And in sharp contrast to the post-1945 era, the USA held aloof and looked to its own interests, while the British were at best uncomprehending and obstructive. As the French (Belgian-born) economist and senior League of Nations official Daniel Serruys complained, it was “so difficult to talk with British officials: many of them did not seem to understand the continental theory or talk the continental language.”

However, the legacy of the 1918 Armistice, of the Versailles Treaty, and of inter-war diplomacy clearly amounted to much more than Hitler and another war. The post-1945 planners did look back to the inter-war era for negative and positive lessons, and many had participated as younger men in the more visionary of inter-war efforts to build constructively and imaginatively on Versailles. And if few of the more senior inter-war advocates of European union survived to witness the fall of Hitler, those that did, surely, celebrated post-1945 events as the realisation of their own ambitions.

Feature image credit: “Through the Poppy Fields” by Marten Bjork via Unsplash.

Conan Fischer is an Honorary Professor in the School of History at the University of St Andrews in Scotland. He is the author of the chapter "Remaking Europe after the First World War" from the The Oxford Handbook of European History, 1914-1945 and A Vision of Europe: Franco-German Relations during the Great Depression, 1929-1932 (OUP, 2017).