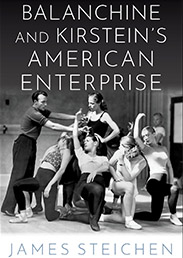 There are few choreographers with more influence in the world of ballet than George Balanchine. Over three decades after his death, his ballets are performed somewhere on the planet virtually every day. Two prominent dance institutions continue his legacy—the School of American Ballet and the New York City Ballet—and dancers who worked alongside him lead important companies and schools across America from Miami to Seattle. So important is Balanchine’s legacy that his own last name is a registered trademark, and a special Trust ensures that his ballets are preserved and licensed properly. This kind of permanence is especially notable in the world of dance, often an ephemeral and evanescent art form.

As is the case with many famous artists, Balanchine is a figure somewhat larger than life, and accordingly, his life and career have been the subject of a good deal of mythologizing. These ways of talking about Balanchine make for great storytelling, and many of them have their origins with Balanchine himself. But they don’t actually square with reality. In the course of my research for Balanchine and Kirstein’s American Enterprise, I discovered time and again that the reality of what happened during Balanchine’s first decade in the United States is infinitely more fascinating and illuminating than the stories and myths. Here are five of the most consequential of these myths:

1) “But first, a school.” This might be termed the founding myth of Balanchine’s American career, and the choreographer is said to have uttered this phrase when Lincoln Kirstein first proposed that he come to the United States to found a ballet company in 1933. In fact, most evidence suggests that Kirstein was the true champion of the School of American Ballet, while Balanchine’s primary motivation for coming to America was the opportunity to create new ballets for the stage. Choreography and not pedagogy remained Balanchine’s primary focus for most of his early years in the United States, much to the consternation of Kirstein and others.

3) Balanchine versus the New York Times. It’s often claimed that John Martin, the prominent dance critic of the New York Times, had it in for Balanchine and made it difficult for his enterprise with Kirstein to succeed. Martin is caricatured as an obstinate partisan with an irrational allegiance to modern dance and special disdain for foreign-born artists. In fact, Martin was a big fan of many of Balanchine’s works and the faults that he did find in some of his ballets were echoed by numerous other writers and observers.

4) Balanchine the “neoclassical” choreographer. Balanchine is especially renowned today for his abstract and neoclassical approach to choreography, exemplified by works such as Serenade and Concerto Barocco. When he first arrived in America, however, Balanchine had a much different style and was mostly regarded as an overly experimental modernist with a penchant for the idiosyncratic and bizarre. Most of his ballets were premised on obsessive love triangles, surrealist conceits, or both, and American audiences and critics accordingly found them a bit hard to swallow, including his now beloved ballet Apollo.

5) The meaning of Balanchine’s “popular” work. During his first decade in America, Balanchine created dances for nine productions on Broadway (including four musicals by Richard Rodgers and Lorenz Hart) and three feature-length films. These projects are often considered peripheral to Balanchine’s efforts with Kirstein, even though many dancers and historians have long noted how his choreographic style was influenced by rhythms and techniques from popular American dance forms such as tap. In reality, Balanchine’s popular projects were closely intertwined with his “official” work on the ballet stage. And one of his most significant neoclassical ballets, Concerto Barocco, was likely inspired by the title number of the musical On Your Toes.

In recent months, the two institutions that Balanchine co-founded with impresario Lincoln Kirstein have been unsettled by abrupt changes in leadership and disturbing allegations of misconduct. In discussions about the future direction of the enterprise, Balanchine’s legacy looms large, to the point of defining and perhaps hindering the search for a new leader. At this moment in history, it’s thus more important than ever to separate mythology from reality as far as Balanchine is concerned. Indeed, confronting the reality of Balanchine’s complicated past just might make it easier for the School of American Ballet and New York City Ballet to chart a bolder and more confident future.

James Steichen grew up in Tulsa, Oklahoma and attended the University of Virginia and University of Chicago before completing a Ph.D. in musicology from Princeton University. Prior to his doctoral studies, he worked for five years in the development office at the John F. Kennedy Center for the Performing Arts, and he currently serves as Director of Individual Gifts at the San Francisco Conservatory of Music. He is the author of Balanchine and Kirstein's American Enterprise.