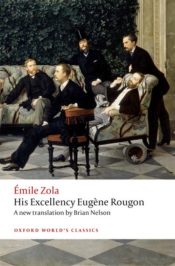 Zola modeled the characters, plot, and settings of his novel His Excellency Eugène Rougon (1876) on real people and events, drawing on his own experience as a parliamentary reporter in 1869–71 and secretary in 1870 to the Republican deputy Alexandre Glais-Bizoin. But the novel is not a mere chronicle of politics during the French Second Empire (1852–70). Zola’s representation of politics is itself political. The novel could be described as “satirical realism.” Its satirical thrust lies in its depiction of a culture of political repression and in its concentration on what happens in the corridors of power: the scheming, the rivalries, the play of interests, the lobbying and gossip, the patronage and string-pulling, the bribery and blackmail, and the manipulation of language for political purposes.

The satire is not simply a question of theme, but also of mode. The “realistic” texture of the novel is blended with techniques of hyperbole, distortion, and caricature that project a strongly ironic attitude towards the objects of representation. The two protagonists, Eugène Rougon, a leading politician, and Clorinde Balbi, a mysterious adventuress—he, demiurgic, titanic, engaging in fantasies of omnipotence; she, a huntress, a goddess, a serpent, a sphinx, living “in a world of endless, unfathomable intrigue”—are as much figures of myth as reflections of real historical models, while the minor characters play caricatural roles in the general narrative of greed and ambition. Indeed, it is reasonable to assume that the swaggering bully Théodore Gilquin, Rougon’s associate in his “political work” before Louis Napoleon’s coup d’état of 1851, and his occasional spy and henchman afterwards, was consciously conceived as a drunken version of Ratapoil, a character created by Honoré Daumier (1808–79), the “Michelangelo of caricature” who famously satirized the bourgeoisie, the justice system, and politicians through the emerging medium of lithography. Between March 1850 and December 1851, in the satirical magazine Le Charivari, Daumier published about thirty lithographs illustrating Ratapoil, who was intended to represent the shady agents who worked to help Louis Napoleon rise to power.

It is in the treatment of the relationship between Rougon and his gang of acolytes that the satire assumes a particularly surrealist quality. When Rougon is back in power, as Minister of the Interior, his greatest satisfaction is to bask in the admiration of his entourage:

He said he was happy to have them around him, like faithful pets. It was not he alone who was the Minister, they all were, as if they were appendages of himself.

When his position is weakened, and Clorinde engineers his downfall, his “little court” deserts him. He finds himself alone.

He began to think back on his gang, with their sharp teeth taking fresh bites out of him every day . . . They lived on his flesh, deriving all their pleasure and health from it, feasting on it without thought of the future. And now, having sucked him dry, and beginning to hear the very foundations cracking, they were scurrying away, like rats who know when a building is about to collapse after they have gnawed great holes in the walls.

While Rougon, the leader who despises the common herd, embodies the pathology of power, his gang represents a familiar reality of modern politics: the leader’s dependency on his “base.”

A striking feature of the novel, and of its satiric intent, is its repeated focus on the relations between language and politics. Rougon sits at his desk, drafting an important circular. “Jules!” he shouts to his secretary, “give me another word for authority. What a stupid language we have! . . . I keep putting authority on every line.” For Rougon, the idiom of authority is repetitious and reductive. It corresponds, of course, to his distrust of the press except as an instrument of propaganda.

Whereas the Naturalist writer seeks to tell the truth, Rougon prefers to suppress it, or rather, to manipulate language to construct and impose his own “truth.” As a writer, he has problems: “Matters of style had always bothered him. Indeed, he despised style. . .” While uncomfortable with the written word, he is presented as a peerless practitioner, in his speeches and generally, of the rhetoric of political authority. His prowess as an orator is first displayed on the public stage in Chapter 10, when he gives a speech at the ceremony held to inaugurate work on a new railway line from Niort to Angers. The chief government engineer (a man who “prided himself on his irony”) includes in his own speech several little barbs that subtly highlight the self-interest and double-dealing that underlie the scheme (which has indeed been conceived to enrich one of Rougon’s cronies). Rougon responds to the engineer’s insinuations with a rhetorical performance that is majestic in its cant:

Now it was not merely the Deux-Sèvres department that was entering a period of miraculous prosperity, but the whole of France—thanks to the linking of Niort to Angers by a branch railway line. For ten minutes he enumerated the countless benefits that would shower down on the people of France. He even invoked the hand of God.

The challenge for Rougon, as a politician, is to control discourse. As George Orwell wrote in his classic essay ‘Politics and the English Language,’ “political language . . . is designed to make lies sound truthful and murder respectable and to give an appearance of solidity to pure wind.” Orwell wrote those words in 1946, but they are eminently applicable to His Excellency Eugène Rougon, just as they resonate, very strongly, today. The highest levels of government in the US today present us with unprecedented amounts (and degrees) of mendacity (“alternative facts”), often served up in a ludicrously bombastic manner. This led the late Philip Roth to characterize the current President as a person “incapable of expressing or recognizing subtlety or nuance . . . and wielding a vocabulary of seventy-seven words that is better called Jerkish than English.” In the opinion of many, the President’s words, delivered often via Twitter and amplified on Fox News, have radically undermined the very notion of a shared political truth.

Brian Nelson is Emeritus Professor of French Studies and Translation Studies at Monash University, Melbourne, and a Fellow of the Australian Academy of the Humanities. He has been editor of the Australian Journal of French Studies since 2002. His publications include The Cambridge Companion to Zola, Zola and the Bourgeoisie, and translations of Earth, The Fortune of the Rougons, The Belly of Paris, The Kill, Pot Luck, and The Ladies' Paradise for Oxford World's Classics. He was awarded the New South Wales Premier's Prize for Translation in 2015. His most recent critical work is The Cambridge Introduction to French Literature (CUP, 2015).