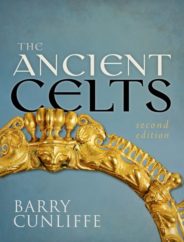 Confession: I’m not an archaeologist nor a historian—at least not in any meaningful sense, though I do delight in aspects of both. But I was lucky enough to see Barry Cunliffe speak about the Ancient Celts at the Oxford Literature Festival earlier this year and then to have front row seats to the recording of this podcast, and I wanted to share a little of what I’ve learned.

As JRR Tolkien quipped “Celtic is a magic bag, into which anything may be put, and out of which almost anything may come . . . Anything is possible in the fabulous Celtic twilight, which is not so much a twilight of the gods as of the reason.” The generalized concept of (Ancient) Celt is a tricky one, for starters the Celts likely didn’t recognise themselves as one people or nation, but instead were tribal and would form alliances and/or fight with other tribes. (The modern use of the term “Celt” suffers a similar ambiguity).

There are, however, some things they had in common, notably language and art. We’ll come to language next, but Celtic art, or art of the La Tène style, is similar all the way from Bulgaria to Ireland and is typified by swirly repeating patterns as you can see in the Wandsworth Shield below.

The earliest undisputed record of Celtic language is found in an inscription from the sixth century BC, though it must have been spoken long before this. It is also likely that the Celtic language emerged as a Lingua Franca across the Atlantic Zone (Britain, Ireland, Spain, etc.) to facilitate social engagement, trade, and the spread of ideas and culture.

There are several Celtic languages that survive today: Welsh, Breton, and Irish and Scottish Gaelic are all descendants of Celtic and retain some mutual intelligibility.

Here’s a recording of a native Breton speaker speaking English—does it sound more like a French or Welsh accent to you?

3) It seemed like a good idea at the time…

Many of us might have agreed to things we might not normally do while under the influence: “skydiving sounds like a great idea”; “sure, I’ll sign up for that marathon”; and so it was for the Celts. During evening festivities, warriors would boast of their prowess and organize raiding parties. The next morning while sober, or potentially while still drinking, those who had committed to the raid would see it through. If successful the raid leader would gain status in the tribe by sharing the spoils with their followers and seek to gain new ones.

Wait, status measured by number of followers? It’s comforting to know that in 2,500 years some things haven’t changed…

The feast was a crucial part of Celtic culture, not only a chance to eat, drink, and be merry but also to redefine or re-establish the social hierarchy. After the beast from the day’s hunt had been cooked and carved, meat from the thigh would be served to the chief charioteer. This piece was known as the “hero’s portion.” If another warrior or charioteer, aspiring to greatness, thought that they were more deserving they could issue a challenge and fight it out for the meat. This didn’t always end very well for one or the other with death being a possible outcome. Similar scenes have been noted at Sunday lunch for the last Yorkshire pudding.

5) The enemy of my enemy… nope, still my enemy.

A traditional Irish story from the early centuries AD tells of a chief surrounded by rivals and enemies, so with a cunning plan, he invited them to a great feast. During the feast he told each one of them in secret that they were his most-honoured guest. Over the course of the night, the rivals let slip to each other that they were his favourite, which inevitably caused disputes, which then escalated to violence.

The story goes that the host’s rivals killed each other leaving him the victor; “when the sun rose the next morning the blood was still flowing over the threshold.”  Think I’d prefer dinner at the Freys’.

The Romans had an interesting but difficult relationship with the Celts, there is evidence that they traded with each other but they were also often at arms. While the Romans regarded the Celts as barbarians, they also held them in some esteem. Roman writing about the Celts calls them “noble savages,” this is in part to big up the Romans’ perception of themselves and their empire. By regarding their enemy as courageous and honourable (though perhaps in relative terms) their victories against the Celts were even more commendable and any losses more explainable.

Julius Caesar speaking of the Druids, the “educated class” of Celts, said that to learn their ways would take 20 years. This is in part due to the fact that the oral traditions of the Celts, and their lack of script—though they occasionally made use of other languages’ scripts—made wide dissemination of their knowledge difficult.