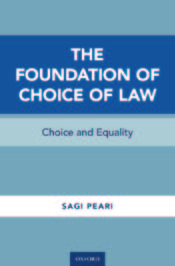 The Foundation of Choice Law: Choice and Equality

We live in a rapidly changing world with the constant presence of so-called “foreign elements” in legal cases. Take, for example, a car accident between an Ontario resident and a New York resident that took place in Mexico, or a contract signed in Japan between English and German residents with respect to delivery of goods in Brazil. Given the multitude of “foreign elements” in the factual bases of these cases, which state’s law should the domestic court apply to adjudicate the litigation? Should this be Ontario, New York, Mexico, English, German, Japanese, Brazilian law or even some other?

The presence of a “foreign element” within the factual basis of a case is only becoming more common. With the complex web of international business and commerce, and growing cross-border tourism, it would be safe to say that soon the majority of cases in the world will have some foreign element within their factual basis. Commonly, the litigating parties do not reside in the same place or the goods are manufactured in different places, and the degree of cross-border activity is rapidly increasing. Furthermore, in the era of the internet and such cross-border phenomena as online contracts and online defamation, the presence of “foreign elements” seems to be an inherent part of litigation.

The question of the applicable law to govern litigation including a “foreign element” is still perplexing. The easiest solution would probably be to say that the domestic courts should always apply their own law. Thus, the English courts shall apply always the English law. And the Brazilian court shall always apply the Brazilian law. Yet, this application of domestic law seems to be somewhat unfair to the parties and frequently defeats their reasonable expectations. Thus, for example, the plaintiff may acquire jurisdiction over the defendant based merely on the defendant’s then-current residence, which can be entirely irrelevant to the place of the parties’ interaction, the place of the parties’ business, and the place of their residence at the time of their interaction. How can a defendant’s residence in Brazil be relevant to the factual situation in which the parties have signed a contract in Germany with respect to the delivery of goods in Germany? Why should a Brazilian court apply Brazilian law to circumstances that seem completely unrelated to Brazil?

In the era of the internet and such cross-border phenomena as online contracts and online defamation, the presence of “foreign elements” seems to be an inherent part of litigation.

To add a further degree of complexity, one may inquire about the status of a popular practice according to which the parties agree between them on the identity of the applied law. Consider a contract between English and German residents signed in Japan with respect to delivery of goods in Brazil. Can the parties stipulate in their contract that their potential future dispute shall be governed by Ontario contract law? Furthermore, would it be possible for the parties to agree on so-called “non-state” law (such as the various religious laws and other substantive law provisions) which do not represent a law of any state, and yet seem to be substantive enough to provide a framework for adjudication? Finally, it is not clear how it is possible at all for parties to impose their choice of applicable law on the domestic adjudicative tribunal, perhaps irrespective of its own rules and even its own policies?

What is interesting is that despite the myriad of terms and titles, one can trace within the various systems an emerging consensus with respect to the question of which law applies in the case of a “foreign element.” Despite the differences in terminology and labels, one can argue that the various systems (including the United States, Canada, Europe, China and Australia) have expressed their general antagonism towards the application of the above-mentioned domestic laws as key to tracking the identity of the applicable law in cross-border litigation. Instead of the application of the domestic law, it would appear that a careful analysis of various rules, doctrines, concepts and principles within various systems reveals a common ground amongst the systems. Labels aside, this common ground lies elsewhere and has nothing to do with the application of domestic law.

Specifically, the following three key points of emerging consensus can be identified. First, it would appear that the systems generally honour the above-mentioned ability of the parties to agree on the identity of the applied law. This ability represents the autonomy of the parties and illustrates the deep connection between the parties’ choice, public legal institutions, and their products. Second, many legal systems tend to agree that in circumstances when the analysis of the entire picture of the parties’ interaction clearly refers to a certain place, the place of that state would apply as a reflection of the parties’ reasonable expectations. Thus, for example, it would be reasonable to favour the application of Ontario law in the case of a car accident between an Ontario resident and New York resident that has taken place in Ontario. Finally, it seems to be traceable within the various systems that whatever the analysis of the various foreign elements may lead to, or whatever the litigating parties have agreed to, in certain highly exceptional circumstances the adjudicative tribunals have the discretion to refuse the application of foreign law. These exceptions underlie the transnational aspect of the litigation process, which trumps the ordinary mechanics of various foreign elements and the parties’ choice.

Indeed, the presence of a foreign element within contemporary and future litigation has been escalating. While the solution of mere application of domestic law seems to be an inadequate solution, one can argue that a remarkable consensus has been achieved among various systems as to the mechanics to identify the framework to adjudicate parties’ disputes. This consensus reflects the transnational character of such notions as party autonomy, parties’ reasonable expectations and the departure from ordinary process in exceptional circumstances. The future of litigation with a foreign element seems to be bright and fairly uniform.

Sagi Peari is a Faculty member of Law School at the University of Western Australia. He researches and teaches within private law, commercial law, international law, and their intersections. He has published in leading US, Canadian, European, and Australian legal journals. Sagi holds a SJD degree from the University of Toronto, where he held the prestigious Joseph-Armand Bombardier and Connaught Doctoral Fellowships. In addition, he was a recipient of a Hauser Global Scholar Fellowship at New York University, a Connection Grant from the Social Sciences and Humanities Research Council of Canada, and has been recognised for his academic contribution by the American Society of International Law.

In May 2018 he published The Foundation of Choice of Law: Choice & Equality (Oxford University Press). This book tackles basic questions of international private interactions and international commercial dealings, delves into the fundamentals of such notions as private law theory and international human rights, and evaluates the ability of traditional legal doctrines to cope with the advancing challenges of the digital age.

Presently, Sagi is working on another book for Oxford University Press, entitled International Negotiable Instruments(co-authored with Professor Benjamin Geva, due 2019). This joint work explores the historical background and origins of international negotiable law, and tackle such issues as the differences between the systems, harmonization trends, and the challenges of the digital age.

Which law applies to negotiable instruments?

International law regarding use of force