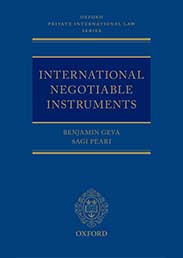 The three types of negotiable instruments governed by legislation are: bills of exchange, promissory notes, and cheques (bill, notes, and cheques). The bill is an unconditional, written, signed order in which one party instructs another (the drawee) to pay a specific sum of money to a third party. A cheque is a variant of the bill in which the drawee is a bank. A note is an unconditional written promise to pay money. Hence, negotiable instruments could be characterised as an unconditional obligation embodied in the form of a physical document. “Negotiability” is a central common feature of the three types of these instruments according to which the instrument holder may transfer it (and the right to payment under it) by physical delivery (possibly with an indorsement) to another party, who may acquire a better title than the transferor.

The law of negotiable instruments is known for its sophistication and internal complexity. For centuries it has provided an effective legal solution for the pertinent needs of domestic and international commerce, facilitating predictability, protection of parties’ justified expectations, and the elimination of the risk involved in the physical carriage of money. The internal balance of its rules, doctrines, concepts, and principles has been achieved through a slow and ongoing evolution—a Sisyphean effort of adjudication tribunals to balance of the interests of commercial actors, fairness, legal predictability, and commercial utility.

Significant parts of commerce continue to use negotiable instruments. Payment mechanisms will not disappear in the advancing reality of digitalization. All essential elements of negotiable instruments law—the requirements of writing, possession, and signature—could be functionally adjusted to this reality (see the Electronic Communications Convention and MLETR). Once this happens, a digital negotiable instrument would become a powerful competitor to credit cards and online methods of payment. After all, this law has the advantage of the accumulated wisdom of centuries, internal sophistication, and a self-reflective process of learning from its own mistakes and deficiencies. Thus, it lacks the deficiency of the online mode of payment under which the transfer of funds from one account to another takes place immediately—which is disadvantageous to consumers. The negotiability feature of this instrument could meet the demands of sophisticated contemporary financial structures and commercialization.

With the growth of cross-border commerce, there is a critical question of the applicable law to govern the various aspects of the parties’ rights and obligations under the instrument in an international setting. In legal jargon, the area of “conflict of laws” deals with this question. Despite some harmonization efforts, the legal systems have not reached a consensus with respect to key substantive aspects of negotiable instruments law. This diversity amongst the systems signifies the centrality of the conflict of laws analysis that may determine the outcome of litigation.

Unfortunately, a review of the relevant rules reveals a great concern. The conflict of laws rules concerning negotiable instruments diverge amongst the systems. Worse, these rules fail to reflect the essentials of negotiable instruments law and accommodate the developments that have taken place within the modern conflict of laws doctrine over the recent decades. Thus, the present rules adhere to an unhelpful stringent dichotomy between “foreign” and “domestic” instruments; follow the condemned arbitrary rule of the place of contract formation; and deny the most important principle of the modern conflict of laws thought—a principle that enables the litigating parties to determine the identity of the applicable law.

Sadly, after thorough analysis under the principal global legal systems, we have concluded that the contemporary conflict of laws rules within negotiable instruments law have originated from flawed premises about the nature of the subject. Further, contemporary rules have left behind the modern development of conflict of laws doctrine. The call for a “radical overhaul” of the rules echoes those concerns. Relying on the foundation of negotiable instruments’ law within the traditional ordinary doctrines of contract and movable property and invoking developments within modern choice-of-law thought, legal scholarship must endeavour to comprehensively challenge the traditional orthodoxy and offer a complete re-examination of the conflict of laws rules concerning negotiable instruments.

Featured image by Free-Photos via Pixabay.

Benjamin Geva is Professor of Law at Osgoode Hall Law School in Toronto. He specializes and teaches in the areas of commercial, financial, and banking law, and has published extensively on these topics, including in leading legal journals and Bank Collections and Payment Transactions (Oxford University Press, 2001). Under the IMF technical assistance program, he has advised and drafted key financial sector and payment systems legislation for the authorities of several countries, and he is also a member of MOCOMILA.

Sagi Peari is a Senior Lecturer (Associate Professor) and the Director of the Business Law Major at the University of Western Australia Law School where he teaches private law, commercial law and their cross-border dimensions. He has published extensively on these topics, including articles in leading legal journals and a monograph, The Foundation of Choice-of-Law: Choice & Equality (Oxford University Press, 2018).