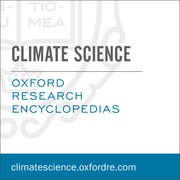 Substantive, peer-reviewed, and regularly updated, the Oxford Research Encyclopedia of Climate Science combines the speed and flexibility of digital with the rigorous standards of academic publishing.

Despite scientific consensus about the reality of climate change, one of the challenges facing the scientific community is effectively facilitating an understanding of the problem and encouraging action. Given the complexity of the issue, its many interdependencies, and lack of simple solutions, it’s easy to ignore. For many people, the threat of climate change feels distant and abstract—something they don’t easily perceive in their day-to-day lives.

One of the ways that might help people grasp the real complexities of climate change is through narratives and storytelling. Narratives help people understand and communicate information by organizing the information in a way that is conducive to human cognition. Additionally, narratives can be effective because they present lived experiences of others, which may make it more difficult for them to be discounted. In the arts field, there has been an encouraging increase in the number of stories being told about climate change. From cinema to theater, artists and celebrities have helped publicize the effects of climate change by making them feel real.

The Oxford Research Encyclopedia Climate Science will help us understand how this field has helped the scientific community reshape their communication strategy.

Individuals respond to and process information differently. For some people, knowing the scientific facts about climate change may not feel helpful or beneficial. In fact, knowing about it may make people feel paralyzed by the magnitude and complexity of the problem, and they may disengage because of a negative (and fully rational) appraisal of their individual capacity and efficacy to do something about it.

The arts and humanities engage people in many different ways through different mediums (art, film, writing, etc.). Telling climate stories in distinctive ways involves a variety of senses, allowing audience to experience the reality. The arts and humanities can help move beyond simply conveying information about climate change. They allow the so-called invisibility of climate change to be seen, felt, and imagined in the present and the future.

A relatively new genre of fiction—climate fiction, also known as cli-fi—is helping to break the silence surrounding climate change. Cli-fi stories often involve apocalyptic events or dystopian futures, such as The Day After Tomorrow (2004) and Waterworld (1995). Informed by scientific knowledge regarding the likely environmental consequences of climate change, these stories offer audiences a vivid and unsettling depiction of the future that is being created.

Documentary films have presented powerful climate stories. Increasingly, filmmakers are using documentaries and documentary TV shows (“edutainment”) to both inform audiences of the facts of climate change as well as to persuade them that problem is a serious one urgently requiring human action. Several documentaries have been created to educate the public about anthropogenic climate change as well as to advocate for individual and collective action. Studies have shown audiences are more likely to acquire and retain science knowledge when it is presented in narrative formats like documentaries.

Studies have shown audiences are more likely to acquire and retain science knowledge when it is presented in narrative formats like documentaries.

Their reach, however, might be limited. This may be due to selective exposure: the tendency of individuals to prefer media that they assume will reinforce their values over media that they assume will challenge their preexisting beliefs. Because many environmental issues are highly partisan, this selective exposure is frequently politically-motivated and individuals tend to sort into partisan news sources. Although the processes by which science and environmental documentaries influence public salience and thus policy demands about an issue like climate change can be difficult to predict, it is impossible to deny that documentaries at least have the potential to play a major role in shaping public discourse about the environment due to their potential influence on the amount and quality of news coverage and thus public attention toward specific environmental issues.

Celebrities & the embodiment of audience

Moving beyond the screen, celebrities use their cultural status to raise awareness of climate change, bringing it within the popular cultural sphere, as well as utilizing their fan bases to mobilize engagement and action via social media. But, they have done so through what might be termed the “spectacle:” highly visible, eye-catching, and visually exuberant media appearances that have the potential to distract audiences from the “real” environmental issues under scrutiny. Here, then, celebrities provide an important human dimension to climate change beyond polar bears and melting glaciers to develop a kind of “human embodiment of the spectacle” in the ways they utilize their very bodies to garner media and audience attention around environmental activism. However, celebrities may render climate change as monetized and meaningless media performances. Thus, the endorsement becomes inauthentic and the audience turns away from climate change belief. While there remains many questions regarding the positive—or negative—effects of “celebritizing” climate change belief, it is still true that the topic is in the mainstream, which may be in and of itself a victory.

The public relationship with climate change belief or denial has been increasing with the help of the media landscape. If we are to move the audiences to become politically active, we must understand the way in which science and media can benefit each other.

Featured image credit: US Secretary of State John Kerry and Actor and Environmental Activist Leonardo DiCaprio at the 2016 Our Ocean Conference, by US Department of State. Public domain via Wikimedia Commons.

Stephen Mann is a Marketing Coordinator at Oxford University Press. Information from this blog post comes from the Oxford Research Encyclopedia of Climate Science.

Who decides how much the world can warm up? [Video]