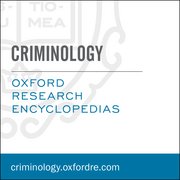 Substantive, peer-reviewed, and regularly updated, the Oxford Research Encyclopedia of Criminology & Criminal Justice combines the speed and flexibility of digital with the rigorous standards of academic publishing.

The modern media landscape is filled with reports on crime, from dedicated sections in local newspapers to docu-series on Netflix. According to a 1992 study, mass media serves as the primary source of information about crime for up to 95% of the general public. Moreover, findings report that up to 50% of news coverage is devoted solely to stories about crime.

The academic analysis of crime in popular culture and mass media has been concerned with the effects on the viewers; the manner in which these stories are presented and how that can have an impact on our perceptions about crime. How can these images shape our views, attitudes, and actions?

Using the Oxford Research Encyclopedia of Criminology and Criminal Justice, we looked at how crime is covered in the media and its ramifications.

Nowhere is the abundance of crime news coverage more evident than in the newspaper medium, which often faces fewer constraints with respect to space and time compared to other formats (television), thereby enabling more stories to be generated. Despite the fact that certain crimes are considerably more common (e.g., property crimes), violent crimes are covered much more frequently. Even still, not all violent crimes receive equal coverage. In fact, stories that are deemed sensational are not reported on the same across the board. A study examining the media coverage of mass murders between 1976 and 1996 found that newsworthiness of cases varied across space—that is, while nearly all mass killings were covered by local sources, a much smaller proportion of cases were successful in garnering national attention.

One of the many contributing factors that determine whether or not a case receives media attention is the newsworthiness of its victims. According to the researchers, these individuals were “[w]hite, in the youngest and oldest age groups, women, of high socioeconomic status, [and] killed by strangers.” Further studies have also demonstrated intersections of race, class, and gender as indicators of “worthiness.”

Research shows that with high levels of television news consumption and newspapers readership, increased fear of victimization and crime was present. Even more, local news was found to have a more significant impact on the fear of crime.

In the United States in the 1970s, local “action news” formats, driven by enhanced live broadcast technologies and consultant recommendations designed to improve ratings, changed the nature of television news: a shift from public affairs journalism about politics, issues, and government toward an emphasis on profitable live, breaking news from the scene of the crime. The crime rate was falling, but most Americans didn’t perceive it that way. From 1993 to 1996, the national murder rate dropped by 20%. During the same period, stories about murders on the ABC, NBC, and CBS network newscasts rose by 721%.

At the same time, TV networks invested in crime shows. Fox’s big hit was the reality show Cops, which blended crime news and entertainment. A 1995 study of audiences for the TV show Cops revealed that viewers regarded the show as more realistic than other types of policing shows. Other studies show that viewers see reality shows as providing information, rather than entertainment. Audiences interpret crime-based reality programming as similar to the news.

Indeed, this crime “genre” has found popularity even in the newest of media formats. The popular podcast Serial presented in its first season an investigative journey into a local murder case from Baltimore County, Maryland in 1999.

In the 1960s a term was popularized to describe our society’s fascination with violence and crime as a public spectacle called “wound culture.” It is this odd pull towards the abject that has been at the heart of American media. As the future of media looks to integrate social media and news information more and more, there are serious questions to consider. Will algorithms designed to feed us content we “like” lead to even more consumption of crime news? How will that skew our perception of crime in America? Will an illusion of a crime infested America affect our politics?

Stephen Mann is a Marketing Coordinator at Oxford University Press. Information from this post comes from the Oxford Research Encyclopedia of Criminology & Criminal Justice.