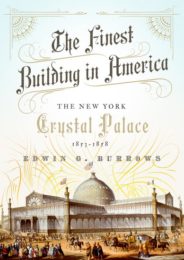 The Finest Building in America: The New York Crystal Palace, 1853-1858

When New York’s Crystal Palace opened its doors in 1853, it quickly became one of the most endeared and celebrated landmarks in the city’s history. But five years later, the building was completely gone—engulfed in flames and reduced to a heap of smoldering debris. The following slideshow of photographs from The Finest Building in America recapture the sensation and spectacle behind the New York Crystal Palace: a building that mattered so much to antebellum Americans and New Yorkers, yet was never rebuilt.

Featured image credit: “Burning of the New York Crystal Palace, on Tuesday Oct. 5th, 1858. During its occupation for the annual fair of the American Institute” scanned by the New York Public Library (Image ID: 1659236). Public domain via Wikimedia Commons.

Edwin G. Burrows is co-author of Gotham: A History of New York City to 1898, which won the Pulitzer Prize for History, and author of Forgotten Patriots: The Untold Story of American Prisoners during the Revolutionary War, which was named Best Book of the Year on the American Revolution by Fraunces Tavern Museum. Distinguished Professor of History Emeritus at Brooklyn College, he has been a Distinguished Lecturer for the Organization of American Historians and served on the boards of the Dyckman Farmhouse Museum in Manhattan, New York History, and the Society of American Historians, and is a past president of the New York Academy of History. Burrows is the author of The Finest Building in America: The New York Crystal Palace, 1853-1858.