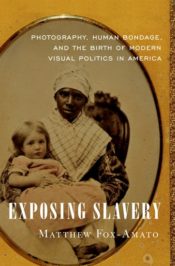 During the 1840s and 1850s, slaveholders began commissioning photographic portraits of enslaved people. Most images portrayed well-dressed subjects and drew upon portraiture conventions of the day, as in the photograph of Mammy Kitty (Figure 1.12), likely enslaved by the Ellis family in Richmond, who placed an arm on a clothed, circular table. Photographs of enslaved people attempted to depict human bondage as a supposedly humane condition. But slaveholders also limited the ways in which enslaved people could express themselves. In the available archive, slaves did not adopt certain poses – including holding portraits of their loved ones (to reveal family ties) and standing on their own (to convey stature) – that free people often used. In this way, photography helped solidify the cultural boundaries between enslaved and free.

When Dolly fled bondage in Augusta, Georgia during the Civil War, enslaver Louis Manigault quickly responded, circulating at least two fugitive advertisements with her photographic portrait (a paper carte de visite). Manigault’s ads demonstrate how photography could be used to police enslaved people’s mobility, though in this case, Dolly was never caught (Figure 1.27).

In the spring of 1863, a fugitive man entered Union lines near Baton Rouge and posed with his flagellated back for the camera (Figure 3.9). He was called both Gordon and Peter in the press, and though his identity remains unclear, the significance of the image is abundantly apparent. Copies of The Scourged Back were quickly sent to the North, and soon abolitionists began selling it in their newspapers; at one point in July the National Anti-Slavery Standard even reported its supply had run out. For abolitionists, The Scourged Back confirmed what they had long said about the brutalities of bondage. The image also marked a turning point in abolitionist culture, as photographs began to replace orality as a form of testimony about the conditions of enslavement.

In August 1850, over two thousand activists gathered to protest the Fugitive Slave Law in Cazenovia, New York.  Many of them posed for a group daguerreotype, including Frederick Douglass, Gerrit Smith, and Mary and Emily Edmonson (Figure 3.17). An early protest image and a strikingly interracial scene, the image was also meant to be shared with activist William L. Chaplin, who had recently been jailed for attempting to help enslaved people escape in Washington, D.C.. The image reveals abolitionists’ innovative uses of photography to picture a social movement and to build that movement through the circulation of photographs.

Abolitionists made and shared photographs of fugitives who passed along the Underground Railroad. This image (Figure 3.23), taken in 1862, pictured an unnamed fugitive and two Union soldiers who stopped in Cincinnati on their way northwards to Wisconsin. It was taken by James Presley Ball, a black photographer in Cincinnati, who had operated a studio in the city since 1849.

During the Civil War, thousands of white northern soldiers encountered thousands of fugitive enslaved people, who fled bondage and entered Union camps (Figure 4.10). In this context, black people, particularly black men, were pictured in a variety of subordinating poses – including scenes of black subjects sitting before, kneeling beneath, and serving white soldiers (Figure 4.15). These images have often been overlooked in the study of Civil War photography, but evidence suggests that these interracial scenes enabled white soldiers to concretize a vision of racial hierarchy as slavery fell.

Artist Alexander Gardner made this image in Richmond in the spring of 1865, as the war came to an end (Figure 5.2). He pictured ten African Americans at the top of an embankment with a crumbling flour mill in the background. Gardner chose not to publish the image in Gardner’s Photographic Sketch Book of the Civil War (1866), instead picking a photograph from the same location that focused on the decayed cityscape (View on Canal, near Crenshaw’s Mill). In doing so, Gardner stressed southern ruination rather than enslaved liberation.

Matthew Fox-Amato is Assistant Professor of History at the University of Idaho. He is a historian of visual and material culture.