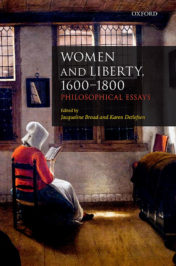 Imagine that you’re a married woman living in a bleak dystopian world in which you’re barred from higher education, you’re forbidden from owning your own property, you have no freedom of movement outside your own home, and your husband might sexually assault you at any time, with impunity.

Only three or four hundred years ago, this was not some fantastic fictional scenario from The Handmaid’s Tale. This was the historical reality for married women in western Europe (sadly, it’s still the reality of some women in some countries today).

But while the early modern era was a period of domination, oppression, and subjugation, it was also a period of resistance, criticism, and feminist protest. Our sisters of the past were much like the sisters of today: they could spot injustices, they got angry about them, and they wrote about how things could change.

Here are ten things that you might not have known about women’s thoughts on liberty during this historical period (1600-1800).

Jacqueline Broad is an Associate Professor of Philosophy in the School of Philosophical, Historical, and International Studies at Monash University, Melbourne. Broad is the co-editor of Women and Liberty, 1600-1800.

Karen Detlefsen is a Professor of Philosophy and Education at the University of Pennsylvania. Detlefsen is the co-editor of Women and Liberty, 1600-1800.