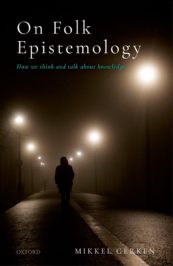 On Folk Epistemology: How We Think and Talk about Knowledge

A key point in the book is that just as our folk psychological judgments may be biased, so may our folk epistemological judgments. Since humans have limited cognitive capacity, we rely heavily on heuristics–cognitive shortcuts by which we form intuitive judgments on the fly. Such heuristics are generally useful because they are cost-effective and reasonably accurate. But they are associated with biases–roughly, systematic patterns of error. Heuristics and their associated biases are ubiquitous in human cognition. So, we should expect that our folk epistemological intuitions are also driven by heuristics and, therefore, biased.

To make this abstract point more concrete, consider an example: Assume that Kim pours herself a glass of water and leaves the room to fetch a book. When she returns, she clearly sees the glass of water on the table. Now consider the knowledge ascription:

A: Kim knows that there is water in the glass.

B: Although she cannot rule out that her husband substituted the water with gin, Kim knows there is water in the glass.

If you find it less natural to ascribe knowledge to Kim in case B, you are not alone. Empirical evidence indicates that when an error-possibility (the gin scenario) is made salient, we are inclined to deny that someone knows. This effect is called “the salient alternatives effect on knowledge ascriptions.”

As you can imagine, philosophers disagree about the salient alternatives effect. But many epistemologists hold the following view: Kim knows that there is water in the glass in both cases, and the fact that an unlikely error-possibility is mentioned in Case B does not alter this. But this philosophical account raises a puzzle: Why does it seem so unnatural to judge that Kim knows in Case B?? This needs explaining. In On Folk Epistemology, I argue that epistemologists may draw on cognitive psychology to provide an explanation in terms of a cognitive bias.

Specifically, I argue that a focal bias is to blame. Very roughly, this is the phenomenon that when an error-possibility is made salient, we automatically process it as if it is relevant to knowledge–even when it is not. If the focal bias hypothesis is right, it has important social ramifications. For example, whether we regard someone as a knower has very significant bearings on how we will treat her. However, from a methodological point of view, philosophers who invoke biases to account for a pattern of folk epistemological judgments must ensure that the account aligns with what we know empirically of such biases. So, unsurprisingly, a philosophical account of our folk epistemology stands in need of empirical input.

Some philosophy-hating philosophers argue that philosophy should be entirely replaced by cognitive psychology. In contrast, I argue that a fruitful empirical study of folk epistemology requires epistemological theorizing. Let me try to briefly illustrate one reason why: In classic studies of the heuristics and bias literature, the researchers invoke a “gold standard” answer which often represents a rule of logic or probability theory. If the study participants systematically violate the rule, a bias is a candidate explanation. But similarly, a folk epistemological bias may only be postulated if there is a good theoretical reason to think that the participants’ judgments are mistaken. So, without some theoretical grasp of what knowledge is, it is hard to assess empirical findings.

Image of Scotland 6 by Mikkel Gerken. Used with permission.

Mikkel Gerken, University of Southern Denmark, Mikkel Gerken (PhD, UCLA 2007) is a Danish philosopher. His research revolves around theory of knowledge and philosophy of mind but it is often integrated with theories of language and communication, cognitive psychology, philosophy of science and philosophical methodology. Gerken was an associate professor at the University of Edinburgh before returning to his native Denmark, where he is now an associate professor at the University of Southern Denmark. He is an elected member of The Young Academy under the Royal Danish Academy of the Sciences and was awarded a Young Elite Researcher prize from the Danish Ministry of Science. Gerken is the Author of On Folk Epistemology.