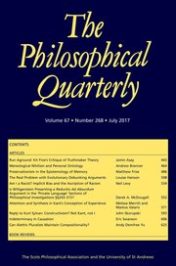 The Philosophical Quarterly is one of the most highly regarded and established academic journals in philosophy. In an age of increasing specialism, it remains committed to publishing high-quality articles from leading international scholars across the range of philosophical study.

Half a century ago, technological advancements challenged our understanding of life’s end. At what point does death occur for human beings? Prior to the 1960s, the answer was simple. The biological concept of death was defined as that which happens after one’s heart stops beating. But when technological advancements allowed the heart to beat even after the brain had died, it was no longer clear whether death occurred when the heart stopped beating or when the brain stopped functioning.

Today, it is our understanding of the start of life, not its end, that’s being challenged. What does it take to reproduce? Once again, technological advancements are challenging one of our most familiar biological concepts. It used to be that there were only two ways for something to reproduce: either through the sort of sexual reproduction typical of most animals or through the asexual reproduction characteristic of things like bacteria. Advancements in biological technology, however, are forcing us to rethink what it means to reproduce.

Consider, for example, “third-party reproduction,” which is a technique for assisting individuals who are having difficulty conceiving. Using genetic material from someone other than the hopeful parents, scientists can help correct biological problems that previously prevented a couple from having children. For example, when an intending mother is known to have disease-linked mitochondrial DNA, a donor can contribute her healthy DNA to replace the unhealthy portion of the DNA of the intending mother. The result is a child with three genetic contributors: one male and two females. Rather curiously, however, the mitochondrial donor is required to acknowledge, by consent, that she won’t be the child’s genetic parent. Apparently, she hasn’t reproduced even though the other two genetic contributors have. In fact, the UK-based Nuffield Council on Bioethics concluded, “[this type of] donation does not indicate, either biologically or legally, any notion of the child having either a ‘third parent’, or ‘second mother’.” But this conclusion seems odd: if a child belongs to his or her parents in virtue of inheriting their genetic material, why isn’t the mitochondrial DNA donor one of the child’s genetic parents?

Today, it is our understanding of the start of life, not its end, that’s being challenged.

One reason offered by the Nuffield Council is that mitochondrial DNA comprises only a small fraction of overall DNA. But it’s hard to know what to make of that reason. As it happens, the fraction of DNA transferred between generations can vary significantly and, according to law, apparently not undermine parent/offspring relations. Compare, for example, the amount of DNA passed from parent to offspring in two standard forms of reproduction: sexual and asexual. In asexual reproduction, the offspring inherits 100% of the DNA of its parent, but in sexual reproduction, that amount drops by half. The offspring of sexually- reproducing parents inherits only half of a parent’s DNA, yet the process is still considered an instance of reproduction. Now, if the amount of DNA passed from parent to offspring can vary this dramatically and still count as reproduction, what prevents even smaller amounts of DNA transmission from being considered reproduction? What amount of DNA is sufficient for the contributor to have reproduced? What if we develop a method of replacing stretches of DNA constituting 40% of overall DNA, or 30%, or 10%? How much is enough for the reproductive process to involve three parents, rather than two? If there is no principled way of drawing a boundary between instances of DNA transmission that are large enough to fall within the boundaries of “reproduction” and ones that aren’t, then we need some other justification for denying that mitochondrial DNA transfers fall under the scope of the concept.

Third-party reproduction is just one of numerous methods available to “assist” reproduction. It’s one of many technological innovations that are forcing us to rethink outdated biological concepts. In the same way that the invention of the ventilator forced us to reimagine our concept of death, so too, inventing new ways of merging biological parts is forcing us to rethink what it means to reproduce.

Monika Piotrowska is Assistant Professor of Philosophy at the State University of New York at Albany. Her research focuses on conceptual and ethical issues arising from advances in genetics and biotechnology. She is the author of "Is ‘Assisted Reproduction’ Reproduction?" in The Philosophical Quarterly.