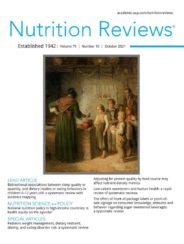 Food plays an important role in brain performance and health. In our review “Brain foods – the role of diet in brain performance and health” we have outlined the role of diet in five key areas: brain development, signalling networks and neurotransmitters in the brain, cognition and memory, the balance between protein formation and degradation, and deteriorative effects due to chronic inflammatory processes.

As an introduction, we make a survey of the neuroprotective effects of specific established diets like the Mediterranean, DASH, MIND, and Healthy Nordic diet, based on results from clinical human studies. There are continuously updated summaries and recommendations available, e.g. from the Global Council on Brain Health. In general, the old saying, “a healthy mind in a healthy body,” is still very valid, and the overall positive results on cognitive ability of entire diets can be summarised with: “what is good for your heart, is also good for your brain.”

Looking at the importance of dietary components for the development of the brain, we can begin with lipids. The fatty acid composition of the polar lipids in the brain is very special, with arachidonic acid and docosahexaenoic acid (DHA) as major components. They are essential for the structure of synapses, the secretion and uptake of neurotransmitters, and as precursors for endocannabinoids—the intrinsic ligands for cannabinoid receptors. How the growing brain can be supplied with the relatively considerable amounts of these specific lipid components during the growth of the fetus and the newborn infant is still a little of a mystery.

Vitamins and minerals are as important for the brain development as for the rest of the body, and beside that they often have special roles in the brain. A few examples: vitamin B6, B9 (folate), and B12 are important in brain development, i.a. related to one-carbon metabolism and DNA methylation. Vitamin D has been called “the neglected neurosteroid” and has its own receptors in the brain. Iron is essential for development and transmission in the brain, and zinc plays a key-role in maintenance of the brain functions.

Our increasing knowledge of the specific neuronal networks in the brain and the neurotransmitters responsible for these has been the basis for therapy against both mood-related and cognitive disorders. Many dietary components can affect the amount and effect of neurotransmitters. A number of international prevention and cohort studies have studied dietary effects on mood disorders, like MoodFOOD, the SUN cohort, and My NewGut.

A large number of plant phenolics and other substances of herbal origin have been used both traditionally and in modern scientific studies, and there is a plethora of extensive reviews of each group of substances. An interesting overall question is why secondary metabolites from plants have such effects on the human brain, and the somewhat surprising answer is: the co-evolution with insects!

The so-called gut-brain axis depends on the secretion of peptide hormones indicating hunger or satiety, or direct neuronal signalling from receptors in the gut via the vagus nerve, and allows the brain both to monitor the accessibility of nutrients and energy in the gut as well as “warning signals” of possible toxicity via bitter taste receptors. There are “silent” taste receptors in the gut directly communicating with the brain. Clearly, the gut microbiota and its resulting metabolites has an important role in this cross-talk.

Cognition and memory are closely related to a phenomenon called synaptic plasticity, which is connected with learning and novelty, and which is affected by aerobic exercise and diet. In our review, we describe the results of dietary interventions and the effects of some specific herbal components and vitamins, such as epigallocatechin gallate (EGCG) found in green tea, resveratrol in red wine, ursolic acid in apples, the flavonoid curcumin in turmeric, and other anthocyanidins in blueberries, vitamin A and carotenoids lutein and zeaxanthin, vitamin B (e.g. folic acid), vitamin C, and vitamin E. Among minerals there are important effects of iron, magnesium, and zinc, to select only a few.

The balance between protein formation and degradation

Many age-related cognitive disorders, of growing importance in a society with an aging population, are associated with the formation of oligomers and polymers of proteins in the neurons. The capacity of the cells to maintain the necessary balance between formation and removal of proteins depends on energy supply and regulation, and this may be influenced by dietary components.

Chronic inflammatory processes are deleterious in the brain as well as in other places in the body. Herbal components can either be anti-inflammatory or offer protection against the long-term effects of inflammation. Traditionally one has looked at the anti-oxidative capacity of plant phenolics in order to neutralise reactive oxygen radicals, formed by inflammatory cells, but now the focus is on the upregulation of our intrinsic protective mechanisms.

Gene expression and epigenetics—influenced by diet?

Besides what is mentioned above, dietary components also influence the gene expression and protein synthesis via epigenetic regulation. This might explain long-term dietary and pharmaceutical effects and might become an expansive field of research in the future, the “new bridge between diet and health.” Likewise, the newly discovered “neurobiome,” i.e. commensal bacterial flora living inside (sic!) the brain, might change our view of what is important for brain health and performance, and will certainly be a topic for future reviews.

Bo Ekstrand has a long-standing experience in many areas of Food Science from universities in Uppsala and Gothenburg, Sweden, and Aarhus, Denmark, with a research interest in later years of how dietary components regulate hepatic de-toxification, the interplay between taste receptors in the gut and brain control of nutrient and energy metabolism, and have together with colleagues from Sweden and Denmark written this review of Brain Food, i.e., how diet influences brain performance and health.