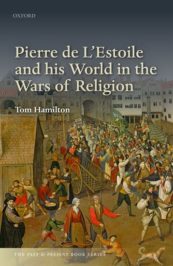 Pierre de L'Estoile and his World in the Wars of Religion

When the church bells rang out in Paris on Saint Bartholomew’s Day, 24 August 1572, they heralded a massacre.

At dawn, on royal orders, the Catholic civic militia assassinated the admiral Gaspard de Coligny and other Protestant leaders. Their cry that “the king wills it!” preceded thousands of killings of Protestants in cities across France during the month that followed. These deaths reignited the Wars of Religion that a royal wedding a few days earlier—between the Catholic Marguerite de Valois and the Protestant Henri de Navarre—had hoped to extinguish.

Historians have debated extensively the causes and consequences of the Saint Bartholomew’s Day massacre. Their explanations have focused on domestic and European politics, the rivalries of factions, and religious confessions. But what was it like to live through these events? And how have contemporary reports shaped historians’ interpretations?

Pierre de L’Estoile (1546-1611), the great diarist and collector of the Wars of Religion, lived through the massacre at Paris but gave few hints as to his personal experience of the event. His house on the rue Thibautaudé stood near the scene of the crime, in the parish of Saint-Germain-de-l’Auxerrois, close to the royal palace of the Louvre where Coligny was assassinated. L’Estoile was certainly in Paris around this time, lending money to a neighbour, and signing documents at work in the Paris Chancery.

Yet, by beginning his most famous diaries with the accession of Henri III in 1574, L’Estoile passed over the Saint Bartholomew’s Day massacre in silence.

A moderate Catholic with close friends among the Protestants, and a supporter of strong royal authority, L’Estoile’s silence about the massacre was tactful. In his sole mention of his action at the time, a remark in his diaries made some thirty-five years later, he revealed he had burned a tract he owned that was critical of the pope “for fear that it would have me burned.” The occasion of the report was L’Estoile’s satisfaction at finding a replacement of the tract to stock his library, an immense collection that included political pamphlets from all parties during the civil wars. He feared these books would mark him out as a Protestant.

Instead of writing about his own experience of the massacre, L’Estoile collected documents about it, especially poems from both sides of the confessional divide that he later copied into a miscellaneous manuscript. In the days after the event, Paris was flooded with pieces written both for and against the massacre and L’Estoile collected them systematically.

Catholic poems denounced Protestants as “Enemies of peace, of God and our princes, sworn enemies of the people and the provinces, immoral enemies of man.” Protestants lamented “Lord, alas! Would you really allow so many murders to take place against your honour?”

A sonnet was introduced as being “by a learned French gentleman, whose life I saved, with God’s grace, on 24 August 1572.” Could this be L’Estoile himself? The poem uses this act as a rhetorical trope to see into the poet’s soul as the massacre has left him with nothing but “a pen, a sword, and my life.”

Compiling these pieces together served L’Estoile’s purpose. Rather than intervene in the confessional politics that divided his family and neighbourhood, in his collection L’Estoile would only interpret the massacre at Paris with a Biblical explanation for this blow struck by God’s providence: “For I have wounded thee with the wound of an enemy, with the chastisement of a cruel one, for the multitude of thine iniquity” (Jeremiah 30:14).

L’Estoile’s collection of the Saint Bartholomew’s Day massacre shaped the sources that historians have inherited to write about these events. The poems bear witness to the polemic of their times.

But, his collection is not only a neutral store of information. As well as representing the troubles, it also sought a way to resolve them. By mediating between Catholic and Protestant perspectives in this collection, L’Estoile asked his readers to see beyond the rhetorical heat of the moment and put their trust in God. He presented these pieces without commentary and let their polemics speak for, and incriminate, themselves.

When he died in 1611, a year after the assassination of Henri IV, L’Estoile bequeathed his collection to his successors. The pieces on the Saint Bartholomew’s Day massacre are part of a much larger collection of the history of the Wars of Religion—diaries, miscellanies, books, pictures, and art objects—that he used to denounce the violence perpetuated by both Catholics and Protestants and call for a peaceful settlement under royal authority. In this way, L’Estoile passed his understanding of the troubles on to his children’s generation in the hope that they would never see such a conflict again.

Tom Hamilton is a Junior Research Fellow at Trinity College, University of Cambridge and the author of Pierre de L'Estoile and his World in the Wars of Religion, The Past and Present Book Series (Oxford, 2017).