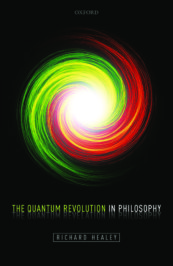 The Quantum Revolution in Philosophy

At a party, on a plane, in the locker-room, I’m often asked what I do. Though tempted by one colleague’s adoption of the identity of a steam-pipe fitter, I admit I am a professor of philosophy. If that doesn’t end or redirect the conversation, my questioner may continue by raising some current moral or political issue, or asking for my favorite philosopher. The reply “No, I’m not that kind of philosopher, my field is the philosophy of physics” typically induces silence as my interlocutor peers into the chasm separating C.P. Snow’s two cultures while I go on about how Einstein changed basic beliefs about space and time.

But now I have to be ready for a different response. “How can philosophers add anything to what physicists have been able to achieve without them? Richard Feynman made fun of philosophy, Steven Weinberg finds it useless, Neil de Grasse Tyson thinks it’s a waste of time, and Larry Krauss and Stephen Hawking say physics has answered big questions about our place in the universe that philosophers used to ask in ways contemporary philosophers simply can’t follow.” This response is a simple appeal to authority, based on scientific eminence, and lately on success in reaching a receptive mass market through popular books and TV shows. But expertise in one field is often not transferable to another, and popular science presentations are often more entertaining than enlightening.

Theoretical physicist Stephen Hawking last year presented a six-episode series of TV programs entitled “Genius.” With jazzy production technique, the series aimed to convince viewers of reality TV shows that they can reach the same answers to big questions as contemporary physicists. Hawking is notorious for his 2011 claim that philosophy is dead, so it is not surprising that his consultant “experts” included no philosopher. A pity: a little philosophical expertise could have provided the balance and coherence the series lacked.

Take the episode “Why are we here?” A medieval Christian would say “To serve God and seek salvation”: the US Declaration of Independence suggests an alternative purpose: the pursuit of happiness. Both count as reasons for being here, though neither offers the answer toward which the episode’s three “ordinary” participants are guided. The episode suggests two kinds of scientific explanations about why we’re here before settling on a third.

First, Laplacean determinism: every last detail of the present state of the universe (including the motions of our brains and bodies) is determined by its earlier state. This is deemed incompatible with our ability to freely choose what to do, with no mention of the long philosophical tradition of compatibilism (see my colleague Jenann Ismael’s recent book How Physics Makes Us Free.)

Second, quantum indeterminism, illustrated by the selective bombardment of our hapless trio triggered by random radioactive decay. Whether this would be any more compatible with free choice than determinism is not addressed.

So why are we here? Hawking professes his belief that understanding quantum theory requires acceptance of many worlds, (some) containing a different version of each of us. Our trio of participants joins an elaborate visual display of free choices by multiple actors, each wearing a face mask matching one of the participants. Initially the actors all line up behind the participant whose mask they wear. When alerted each chooses to step to one side or the other, progressively spreading the lines. Everyone in an initial line is a metaphor for a version of the same person: their position in line corresponds to the world they’re in.

What should we conclude? If their movements mimic the results of random quantum events, then in what sense are they freely chosen? If not, then how does the existence of many worlds help make the free choice of a person in any of them any more compatible with quantum physics? (The moral is supposed to be “I’m here because I’m in my world through my own previous free choices.”)

Hawking may believe there are many worlds, but plenty of physicists, mathematicians, and philosophers don’t. There is no consensus on how quantum theory should be understood. I doubt that most experts share Hawking’s belief. Behind a façade of experimental demonstration, the episode “Why are we here?” hides an appeal to authority. What is needed is the convincing argument that it is the job of the philosopher to provide.

Featured image credit: Provided by the author and used with permission.

Richard Healey is Professor of Philosophy at the University of Arizona. As a philosopher of physics, he has been trying to understand quantum theory for over 40 years while seeking to convince physicists and philosophers how much they stand to learn from each other by cooperating in this undertaking. Richard Healey is the author of The Quantum Revolution in Philosophy.