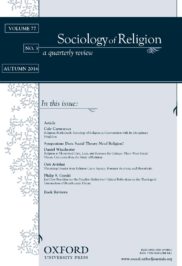 Sociology of Religion publishes original work of exceptional quality and interest without regard to substantive focus, theoretical orientation, or methodological approach.

Pentecostalism is a Christian revival movement. It emerged at the beginning of the 20th century and is marked by a focus on the Holy Spirit and its gifts. Pentecostals believe that the Holy Spirit can award them specific gifts such as the gifts of healing, prophecy, and speaking in tongues. In terms of membership growth, Pentecostalism has been the most successful religious movement in the 20th century, counting around 600 million members worldwide in 2010. In Latin America, the mass-expansion of Pentecostalism created a new religious landscape: while previously dominated by Catholicism, Pentecostalism has become a viable religious option for many Latin Americans. In particular, it has appealed to the lower classes with its expressive and emotional church services and its focus on spiritual healing practices. During the emotional and highly expressive church services members can feverously shout out their problems, pray in tongues, and seek spiritual healing. The movement’s success among the lower classes was attributed to its ability to help those affected by poverty to cope with their living conditions. During my research in Argentina, I witnessed spiritual healing practices and the expressiveness of Pentecostalism. Church services in lower class neighborhoods resembled an emotional roller-coaster ride with moments of quietness and contemplation, forceful prayers, loud singing, shouting of affirmations such as “hallelujah”, dancing in the Spirit, collective ecstasy with participants trembling, crying and dropping to the ground.

However, today, Pentecostalism is increasingly becoming middle class. But what does this mean for a religious movement that holds particular appeal to the lower classes? Academic narratives suppose that upward social mobility leads to social adaptation: more affluent and educated members want to engage with wider society and seek approval from their social environment. This would mean that Pentecostalism would have to become less fervent and more socially appropriate in its forms of expression.

What does this mean for the social mobility of religion more generally? When fervorous religious movements become more middle class, they appear to adapt to their social environment: they withdraw practices that might appear inappropriate to outsiders. However, this is only one part of the story: while adapting to their social environment and becoming socially more acceptable, movements may evolve specific spaces that allow them to maintain original, unadapted elements. As such, becoming more affluent and educated doesn’t necessarily imply an encompassing adaptation process or even secularization. Instead, we may find an adaptation and secularization of visible performances while the given movements remain spiritual and unadapted in the less visible spaces. The spirits don’t become tired, but hide.

Jens Köhrsen is as an assistant professor for religion and economics at the Centre for Religion, Economy, and Politics (University of Basel, Switzerland). He has received his PhD with a study on social class in Argentinean Pentecostalism from the University of Bielefeld and the École des Hautes Études en Sciences Sociales (EHESS). After his research on religion and social class, he started to work in the area of sociology of innovation, conducting research on sustainability and energy transitions. He has authored Middle Class Pentecostalism in Argentina and When Sects become Middle Class.