Long ago (19 May 2010), I wrote a post on the origin of the mysterious word kibosh, part of the idiom to put the kibosh on “to put an end to something.” The discussion that followed made me return to this subject in 28 July 2010, and again three years later (14 August 2013). Since that time, the word has been at the center of attention of several researchers, and last month a book titled Origin of Kibosh by Gerald Cohen, Stephen Goranson, and Matthew Little appeared (Routledge Studies in Etymology. London and New York: Routledge). The preface, signed by Gerald Cohen, states: “The book is prepared with full acknowledgment that primary credit for developing the kibosh < kurbash (lash) etymology [< means “from”] goes back to Stephen Goranson. Matthew Little was first to make that suggestion (in an unpublished manuscript he sent me), but Goranson was first to make the suggestion publicly and in more detail in several messages of the American Dialect Society.” For four decades, Professor Cohen has been the publisher of and the main contributor to the periodical Comments on Etymology, and it was he who prepared the book for publication. “Unconvincing derivations have been suggested from Yiddish to Gaelic and Italian, and thus far consensus among lexicographers has leaned toward referencing the word as ‘origin unknown’” (from the page following the flyleaf and preceding the title page).

Indeed, the etymons from Old French and several other languages can be added to those mentioned above. In my opinion, to make progress in what at one time was called the science of etymology, linguists have to be familiar with everything ever said about the word they tackle. Everything is a frightening word, but, as I keep repeating year in, year out, etymology is a cumulative branch of scholarship. Many good and silly old conjectures made in the past are extremely hard to unearth, and that is why people keep reinventing the wheel: they suggest solutions, unaware of the fact that the same ideas have occurred to investigators in the past (sometimes more than once). Or it may happen that “bits” of promising solutions have appeared in print, and one should only combine them, to reveal the origin of a hard word.

To break the deadlock, I spent years in amassing “everything” that has been written on the origin of English words. But though my bibliography has been published, it is not easy to find all the articles and reviews mentioned them. Hundreds of them appeared in fugitive journals, footnotes, and asides in Dutch, Frisian, Swedish, Russian, and so forth, and it would be naïve to assume that language barriers do not exist for philologists. That is why I believe that monographs like Origin of Kibosh is of great value. Specialists know that similar books, those on ginger, shyster, and hot dog among them, exist. Now kibosh has joined that venerable series. It is more enjoyable and certainly more useful than the thrillers that end up on the bestseller lists and fill the shelves of our libraries. Once you have read the thriller, you may learn who killed the poor man or woman, or many of them and why, while after closing a book on etymology you come away with the knowledge of how a word was born. I should add that this book deals with language, customs, material culture, and history. Cruel overseers, hard-working cobblers, French barons in search of prey, and shadowy cement makers will parade before you.

Do I believe that the riddle has been solved? Have the authors put the kibosh on the old crux, or has the solution they proposed joined the ghosts of the years past?  “Whether I shall turn out to be the hero of my own life, or whether that station will be held by anybody else, these pages must show,” says Dickens in the preface to David Copperfield. The same holds for the derivation of kibosh from kurbash. I did not raise the immortal ghost in vain. For a long time, the earliest author who used kibosh (spelled kibosk) in print was Dickens. Attacks and counterattacks on the monograph will probably follow. The disagreement won’t diminish its value. Serious scholarship does not die with criticism: it merges with “the history of science.” I can probably add that in the Middle Ages, every story was looked upon as the source of edification and entertainment. Read Origin of Kibosh, and you will indeed be instructed and amused.

Animals and their wool

Several thought-provoking comments have dealt with the posts on wool-gathering. Whatever the origin of the idiom to pull the wool over one’s eyes “to fool someone” (it is usually referred to the wig falling over a person’s eyes), the image is obvious: with wool preventing you from seeing things, you will certainly be hoodwinked. I can detect no connection between that idiom and wool–gathering. Also, the earliest occurrences stressed the process of “gathering,” because the form was invariably to go a-wool-gathering and to go on wool-gathering. But I agree that an expression coined by villagers can be misunderstood and reinterpreted by those who have always lived in towns and have no idea what the image behind the idiom meant. That is why I very cautiously suggested that perhaps initially wool-gathering did not mean what we think it did. Unfortunately, I could not go further. Woolly-headed does refer to blurred vision and somehow shares the semantic space with pull wool over one’s eyes, and to have one’s head in the clouds may be close, though clouds do not always resemble fleece. Perhaps the image suggests being engrossed in things far from our sinful earth. 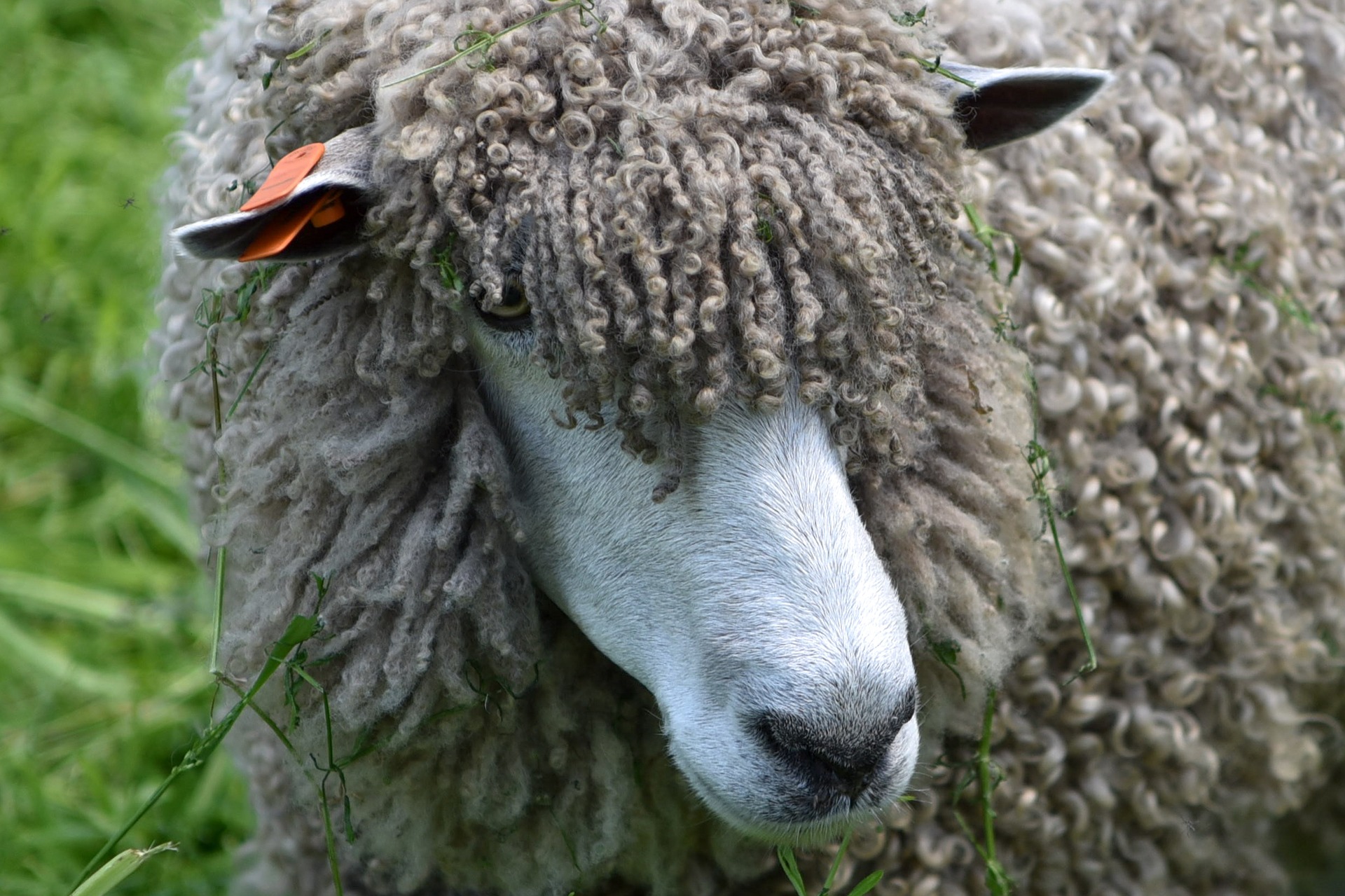 The origin of Engl. nag “old horse” is unknown, and there are several reasons for not connecting it with any ancient word for “sheep.” To turn the reconstructed protoform for “sheep” into Low German/Dutch nak “sheep,” the putative source of nag, one needs that form to have the second laryngeal in the root and later gemination. The details are too technical for this blog (just see the comment: it cites the hypothetical protoform), so that I don’t even highlight the terms. Besides, it often happens that different animals are called the same, and monosyllables are especially prone to be so used. They may be sound-imitative or baby words. Finally, a word of undiscovered etymology can never shed light on any other word. Light does not come from a dark corner. The author of the comment has no great faith in the connection, and I have even less.

The stature of dwarfs

This is in response to a comment following the post on thurse. Unfortunately, I noticed that comment too late. Yes, it is true: the mythological dwarfs were not small. In Scandinavian myths, they compete with giants and function as artisans. All the gods’ treasures were forged by them. In German heroic poetry, it takes Siegfried, the protagonist of The Lay of the Nibelungen, all he can do to overcome Alberich, the dwarf who guards the treasure. From the etymological point of view, dwarf does not mean “small” or “short.” Unlike the gods and the giants, the medieval Scandinavian dwarfs have no “home,” but in folklore, even in early folklore, they are already associated with mountains. The cause of the transition is not quite clear. As great smiths, they must have controlled all kinds of precious stones and ores, and those can be found only in the bowels of the earth. Perhaps that is why dwarfs ended up as mountain dwellers. The next step is even harder to account for. Is space in the mountains so much at a premium that those who live there shrink? Folklore is also full of mountain giants. However, those lived among, rather than in, the mountains. Obviously, some gaps in the history of dwarfs are hard to fill, but it is clear that, if those clever smiths were shown Disney’s movie, based on the Grimms’ tale, they would have taken it for an evil caricature.

Quite a few unanswered questions and comments will be taken care of in the next issue of “gleanings,” in December.

toly Liberman is the author of Word Origins And How We Know Them as well as An Analytic Dictionary of English Etymology: An Introduction. His column on word origins, The Oxford Etymologist, appears on the OUPblog each Wednesday. Send your etymology question to him care of [email protected]; he’ll do his best to avoid responding with “origin unknown.” Subscribe to Anatoly Liberman’s weekly etymology articles via email or RSS.