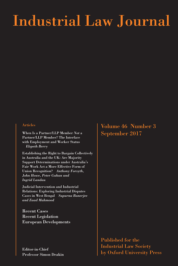 The Industrial Law Journal is established as the leading periodical in its field, providing comment and in-depth analysis on a wide range of topics relating to employment law. It is essential reading for practising lawyers, academics, and lay industrial relations experts to keep abreast of newly enacted legislation and proposals for law reform. In addition, Industrial Law Journal carries commentary on relevant government publications and reviews of books relating to labour law.

Is the law able to offer any assistance to victims of workplace bullying? Let me recite an example, which is all too commonplace.

Daniel* worked in an office in local government in the UK. When he was bullied by his manager he didn’t even realise it at first. The conduct was subtle. He would be given more than his fair share of the unpopular tasks. Everything he did was criticised, not aggressively, but constantly. When the office was reorganised he found his workstation relocated next to a noisy photocopier. The process by which his self-confidence was eroded was gradual. Some may think that Daniel should have just stopped being so sensitive and got on with things. He felt that himself for a while. He couldn’t complain about his treatment because when he said out loud what was happening to him it did sound a bit petty. And yet, over time, Daniel began to dread coming into work, became increasingly isolated from his colleagues, and, eventually, ended up on sick leave for three months. No one came out of this well.

And why was Daniel targeted in this way? Who knows? He never did. He was a fairly ordinary, innocuous kind of guy. So far as he could tell he wasn’t bullied because of anything in particular. For whatever reason his manger didn’t like him and had the power (and the inclination) to do something about that.

Many of us will have experienced bullying. We may have witnessed it happening to others. We may have been on the receiving end. And, although we probably won’t admit it (perhaps even to ourselves) some of us may have been perpetrators. For people to be bullied there must be bullies. Bullies are among us.

Bullying exists wherever there are human relationships, which means it exists everywhere. But there are some circumstances where it is particularly problematic because the victim cannot easily escape. Bullying in schools comes into that category. So does bullying in the workplace.  Why didn’t Daniel just go and get another job? Well, of course, that isn’t all that easy. And he had a mortgage to pay and a family to support. Walking away from the problem was not an option.

Bullying exists wherever there are human relationships, which means it exists everywhere.

If the law gave victims of bullying enforceable rights against their employers then those employers will be motivated to seek solutions as a means of avoiding claims against them. And this is why it is so disappointing that UK law has such ineffective remedies for bullying at work. It has no general legal prohibition on bullying to which victims can turn for redress. It has some targeted protection if the bullying is discrimination based (on the grounds of race, sex etc) but that would offer no help to Daniel. His manager did not pick on him for a discrimination related reason. And other than that, all UK law offers are some causes of action designed for other purposes which some victims may be able to shoehorn themselves into, but many will not. For the bullied worker the UK legal landscape offers little practical assistance.

To say that UK law should do better by the victims of bullying is not to place the law on an unrealistic pedestal. It is not to assume that law can be a mechanism for making all things better. It would, however, be a recognition that law can have a part to play in seeking to tackle a wider social problem, a problem which causes real harm to people on a daily basis. Offering targeted legal redress to the victims of workplace bullying would be a contribution to a wider struggle to improve the workplace experience, something which would benefit employee and employer alike.

*Name has been changed to protect victim’s identity.

Keith Patten spent many years in practice and is now a lecturer in law at Newcastle University. He develops the themes of the legal response to workplace bullying in his article 'Law, Workplace Bullying and Moral Urgency' in the Industrial Law Journal.