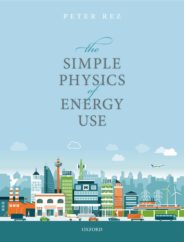 The Simple Physics of Energy Use

We all like the convenience of electrical energy. It lights our home and offices, and drives motors that are needed in heating, ventilation, and air conditioning systems that keep us comfortable no matter what the temperature is outside. It’s essential for refrigeration that secures our food supply. In short, it makes modern life with all its comfort and conveniences possible.

However, most electricity is generated from burning fossil fuels such as coal or natural gas, leading to carbon dioxide emissions that could be responsible for climate change. In many circles there is a comforting belief that renewables such as solar and wind can replace fossil fuel electrical generation and leave us free to live as we do without carbon dioxide emissions. Fundamental physics and engineering considerations show that this is not so.

Power needs fluctuate with time of the day and, to a lesser extent, day of the week. In most places, peaks occur in the evening when people come home, start cooking, and turn on lights and entertainment systems. In Arizona in summer, the peaks are even more extreme due to the air conditioners all cutting in. There are also morning peaks, as people get up and turn on lights and hair dryers. Commercial and industrial use generally doesn’t change much throughout the day. The electrical utilities call this a baseload.

The wicked capitalist-monopoly electric utilities have spoiled us; we’ve gotten used to the idea that we can turn on the lights at night and run an electrical appliance at any time we want. Since electrical energy cannot be stored in sufficient quantities, the utilities are always continuously matching supply and demand. Power generation systems that take a long time to ramp up or down, like nuclear or coal, are left running continuously and used to meet baseload demand. Fast response turbines using natural gas are typically used to match peaks.

Solar and wind present two problems. One is low power density; massive areas have to be devoted to power generation. The other, more serious problem is intermittency. If we only wanted to run electrical appliances when the wind is blowing or the sun is shining, fine, but don’t expect to use solar to turn on your light at night! So solar and wind cannot manage on their own; it’s always solar or wind AND something else. It’s hard to make it all work. They need either extensive storage or to be used in combination with gas turbines.

Batteries are also not a solution. In principle, I could run my house in Arizona on solar energy because almost every day is sunny. However, I would need a battery as big as the one in the Tesla S, about eight times the size of the Powerwall marketed for homes, and it would have to be replaced every three years. As Elon Musk said “Batteries suck.”

On a large scale, the only practical solution is pumped hydroelectric, where water is pumped uphill when there’s sunshine or wind and runs downhill to generate electricity when the wind stops blowing or the sun doesn’t shine. In many places, the extended sunny days are in the summer, the windy periods are in March and October, but the electrical energy is needed in the winter. In such cases, very large reservoirs are needed, comparable to the 250-square-mile lakes like Lake Mead and Lake Powell. Very few places meet these conditions.

So in practice, solar and wind have to be combined with gas turbines to deal with the drop in electricity generated when the sun goes down or the wind dies away. If the solar or wind displaces coal it results in a reduction in carbon dioxide emissions. However if solar or wind displaces nuclear that cannot be ramped up and down, more carbon dioxide is emitted because gas turbines have to be used when the sun isn’t shining and the wind stops blowing. Displacing the highly efficient combined cycle natural gas power plants, on average, results in no change in emissions. The gains from not running the fossil fuel plant when the renewable is available are offset by the losses from running the less efficient gas turbine on its own when the renewable is not available.

One can easily verify this claim by looking to Germany, which has been in the forefront of adopting solar and wind in their Energiewende or energy transition. There is now as much solar and wind generating capacity in Germany as coal and natural gas. Has the increased reliance on renewables made any difference in Germany’s carbon dioxide emissions? Evidence suggests it hasn’t changed very much.

The careful reader may note that the French emit less carbon dioxide per person than the Germans and attribute it to the fact that the Germans are busy churning out BMWs and Bosch appliances, while the French lounge around on extended lunch breaks. However, the reality is more prosaic. The French baseload is almost completely nuclear with negligible carbon dioxide emissions.

If one really wants to reduce carbon dioxide emissions the best thing to do is substitute nuclear power for coal. However, that path is not available in the United States, where nuclear is a four letter word. Instead, we have achieved significant reductions in baseload carbon dioxide emissions over the last decade by substituting high-efficiency combined cycle natural gas for coal burning plants, a change made possible by the low cost of natural gas from fracking. The carbon dioxide emitted for each unit of electrical energy generated is approximately three to four times lower than in the corresponding coal-fired power plant, resulting from the higher thermal efficiency (50-60%) of combined cycle natural gas, compared to coal (30-35%) and the greater amount of energy from natural gas for a given quantity of carbon dioxide emitted.

To make a real difference one has to make a serious impact on the baseload. Intermittent renewables can’t do this, which is why they won’t significantly lower carbon dioxide emissions.

Peter Rez completed his bachelors degree in Cambridge and his PhD on Theory of Electron Scattering in Electron Microscopy, in Oxford. He has worked in industry on computer control and data acquisition in electron microscropy. He's been a professor at Arizona State University since 1985. His interests have broadened over the years and include energy policy. He is the author of The Simple Physics of Energy Use (OUP, 2017).

The case for investing in wind energy