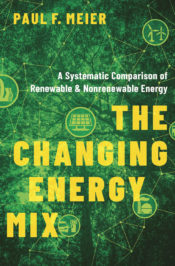 The Changing Energy Mix: A Systematic Comparison of Renewable and Nonrenewable Energy

If you spend time driving on the interstate highway system in the US, you may be surprised, as I have been, to see the rapid development of wind energy. This is especially true in the Great Plains where there is a seemingly endless array of wind turbines decorating the horizon. And, north of Los Angeles, the Tehachapi Mountain Range is home to almost 5,000 wind turbines.

If you were born before 1989, you lived in a US where there was no electricity generated from wind. However, in 2018 wind-generated electricity was almost the same as hydroelectric: 278 TWh (terawatt-hours) from wind versus 289 TWh from hydroelectric. Wind made up 6.2% of the total US electricity generation, a remarkable increase from 20 years earlier in 1998 when it was less than 0.1%. And fourteen states now generate more than 10% of their electricity from wind with three, Iowa, Kansas, and Oklahoma, generating more than 30%. Likewise, the world did not see any electricity generation from wind until 1985 but in 2018 it made up almost 5% of worldwide generation, a significant growth from 20 years earlier in 1998 when it was only 0.1%. Large wind turbines, intended for utility-scale electricity generation, now number more than 400,000 turbines worldwide but, if we include small-scale turbines, the number is greater than one million. Like solar panels, these small wind turbines can be used to reduce your residential electric bill, charge batteries for various applications, pump and purify water, and grind grain.

There is also great potential for further development of more wind energy. The National Renewable Energy Laboratory (NREL) estimates that US could add 11,000 GW (gigawatt) onshore capacity on 846,000 square miles of land in the US, where their estimate eliminates land unlikely to be developed, such as urban areas, federally protected lands, and recreational water reservoirs. And while this area represents an impressive 22% of the total US land area, this is deceiving since a wind farm directly impacts only 2% of the total land area, as farming and ranching can coexist with the wind farm. So, while wind turbines need to be sufficiently spaced to avoid wind interference, something known in sailing as “dirty wind,” the land area needed to place the turbine, permanent roads for maintenance, and transmission equipment is only 2% of the total wind farm. The US also has an offshore potential estimated at around 4,200 GW. The 15,200 GW obtained by combining these two would generate more than 45,000 TWh, assuming the plants operate at a capacity factor of 34%. To put this number in perspective, the total installed US capacity for electrical generation from all sources was 1,200 GW in 2017 and net generation was 4,000 TWh.

Like the US, there is also great worldwide potential which is, by one estimate, 94,500 GW. Applying the same 34% capacity factor used earlier, the generation would be about 280,000 TWh. Total worldwide electricity generation in 2017 was 25,600 terawatt-hours, so full utilization of the worldwide wind energy potential would make enough electricity to meet eleven times the needs of the world. Naturally, there are many hurdles to jump over to make this happen, including economical, geographical, technical, environmental, and improvements to the electrical grid, just to name a few, but it does show the awesome potential for wind-generated electricity.

In the US, the best place for land-based turbines is the western and central Great Plains, where wind speeds are typically 15-20 mph. This should be no surprise to anyone that has driven through the Texas and Oklahoma panhandles and western Kansas. And greater wind speeds result in greater utilization of the design power. It turns out that wind power increases with the cube of wind speed, so doubling the wind speed increases power by a factor of eight.

Capacity factor is a very important part of the economic viability, sometimes quantified as the levelized cost of electricity (LCOE). LCOE is defined as the break-even cost of electricity, taking into account the discount rate to borrow money, the capital cost, the plant life and depreciation, operating costs, fuel costs, capacity factor, and taxes. An average LCOE in the US for a natural gas electric plant is ₵7.6/kWh versus ₵10/kWh for onshore wind. There are, however, regional differences and if we place that wind farm in the Great Plains “wind belt,” the LCOE ranges from ₵2 to ₵6/kWh, making it as good, or perhaps better, than a natural gas plant. Another factor making wind energy more attractive is that capital costs are still decreasing. In 2015, the capital cost for an onshore wind farm was about $2,200/kW, decreasing to $1,600/kW in 2019, a reduction of 27%. Still another factor is turbine height. Formerly, turbine heights were on the order of 80 m, with power ratings of 1.5-2.0 MW. Some of the newer wind turbines, however, are 100 to 140 m tall, up to 1 ½ times the height of the Statue of Liberty! These turbines have power ratings of 3.0-6.0 MW, because wind velocity increases with height, turbine blades can be longer, and there are fewer obstructions.

A key to the future for wind energy is the development of utility-scale batteries and improvements to the electric grid. Since wind is by its very nature a variable energy type, batteries provide a means to deliver stable electricity output, such that excess generation can be stored for low output periods when the wind is not blowing. Access to high-voltage transmission lines is also critical. Whereas fossil-fuel plants can be built close to existing transmission lines, a renewable energy such as wind will be built in the windiest location, a location that may not be near high-voltage transmission lines. Therefore, new transmission lines will be needed to fully realize the US and worldwide potential for wind energy.

In summary, electricity generation from wind has been growing rapidly in both the US and worldwide. And there is a potential for much more growth, especially since wind farms only directly impact 2% of the total land area used, allowing wind farms to coexist with farming and ranching. A key to future development will be the addition of new transmission lines to the electric grid as well as batteries to provide storage since wind energy is, by its very nature, a variable energy source.

The economic and environmental case for electric vehicles