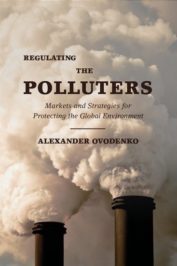 Regulating the Polluters: Markets and Strategies for Protecting the Global Environment

During the 2016 presidential campaign, Republican candidate Donald Trump ran for office on a platform that included supporting the coal industry. His open embrace of coal mining gave hope to an industry that has experienced a steady decline in production and jobs since the mid-2000s. In 2016, coal production reached its lowest point since 1978, when the US population was only 70% of what it is today. Many observers and analysts of the energy sector have their doubts about whether coal will recover, as natural gas prices remain low and renewable energy projects continue growing. Despite what some may call a “secular decline,” signs point to a minor recovery in the coal industry in 2017, largely because of export markets in Europe and Asia. Whether the industry can make this a long-term trend remains uncertain, depending more on energy reforms overseas than on domestic politics at home.

In 2005, nearly 40% of US electricity production used coal. At the time, natural gas prices were two-to-three times their current prices, and the renewables sector was in its infancy. “King coal” dominated the electricity sector and had steady export markets in Asia and Europe.

Beginning in the late-2000s, US energy consumption plateaued and was beginning to decline. Americans were using less energy in the electricity sector and industrial sector, as the population began to stabilize and the economy began to slow down following the recession. Even the automotive sector was beginning to change with the advent of hybrid passenger vehicles. The declining consumption of energy meant that coal would need to compete against cleaner burning natural gas and renewables.

With hydraulic fracturing (or “fracking”), natural gas prices reached historically low levels. This meant that coal was no longer guaranteed to be the least costly fuel source for power generation, as 92% of coal goes toward power generation, and the remainder goes toward steel production and industrial manufacturing. By the end of the Obama administration, natural gas had become so inexpensive nationwide that it was the main source of power generation in the United States overall for the year. Adding renewable portfolio standards and environmental regulations at the state and federal levels, the coal industry was experiencing an increasingly rapid decline by the end of 2016.

Only a few states produce coal in the United States, which makes the politics of protecting coal very targeted. Wyoming produces 42% of all coal in the United States, with West Virginia producing 11% and Kentucky  7%. Coal production in the western United States is largely automated; the production involves far fewer miners per ton of coal than in West Virginia. The vast majority of coal miners are located in Appalachia, where economic conditions have declined gradually since the 1980s relative to other parts of the country.

The geography of coal production makes the electoral benefits of pushing for coal subsidies far from obvious for national politicians. According to a Pew Research poll conducted between 4-9 January 2017, two-thirds of Americans believe that developing alternatives to fossil fuels should be an important priority for addressing America’s energy supply. Even coal-producing areas of Ohio support clean energy resources. According to a recent statewide poll, a large majority of Ohio voters support policies that encourage the use of clean energy, including a renewable portfolio standard and revised rules governing how far wind turbines can be sited from residential areas. It seems that propping up the coal industry has a very narrow support base among the electorate, and only targets a few states that typically vote Republican in national elections.

The recent increase in coal production stems from the slight rise in natural gas prices in 2017 and the growing demand for coal in Europe, despite their environmental and climate policies, and continued demand in China. France experienced disruptions in its nuclear power plants, prompting a need for coal imports. Germany has been purchasing coal for years from the United States, needing a supplement to its large solar and wind industries. President Trump also announced that the United States would increase coal exports to Ukraine, which has been unable to recover coal from the separatist regions neighboring Russia.

Recently, the US Department of Energy released a long-awaited study on reliability in the US electricity sector. During a recent hearing in Congress, the study was referenced on many occasions, with some in the energy industry suggesting that coal and nuclear plants should be eligible for benefits for providing reliability to the grid. However, it remains unclear what form, if any, these reliability payments would take, as subsidizing specific fuels has become politically contentious in recent years (and ironically a complaint by the coal industry against renewables).

At least in 2017, the coal industry is experiencing a marginal recovery. Nonetheless, whether it can compete against cheap and cleaner natural gas and renewables will ultimately determine the future of coal in the United States, just as the effectiveness of clean energy programs in Europe and Asia will determine its export markets. According to US and international agencies, the prospects are not auspicious.

Alexander Ovodenko is an Energy Industry Analyst at the U.S. Department of Energy and a Professional Lecturer at The George Washington University. He is the author of Regulating the Polluters: Markets and Strategies for Protecting the Global Environment. His other work has been published in Global Environmental Politics, Journal of Conflict Resolution, International Affairs, Review of Policy Research, Journal of Strategic Studies, and Security Studies.