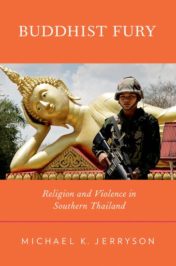 Since August over 420,000 Rohingya have fled Myanmar, citing human rights abuses and seeking refuge in Bangladesh. Sarah Seniuk and Abby Kulisz interview Michael Jerryson, a scholar who works on Buddhist-Muslim relations in Southeast Asia, in order to learn more about the background to this current crisis.

Abby: Michael, who are the Rohingya and what is exactly happening to them right now?

Michael: The Rohingya are a self-identified ethnic Muslim population that has lived in Myanmar for over 150 years. There are over 1 million Rohingya who have lived in Myanmar, a country in Southeast Asia. To understand the current crisis with them, it’s important to begin with their legal history. In 1982, the country enacted the Myanmar Citizenship law in which the Rohingya were omitted from the list of official ethnic groups and denied citizenship. During the junta reign from 1962 until 2011, there were conflicts between different ethnic and religious groups, but this was largely between the Buddhist state and the Karens, which were Christian-based. Starting at the end of 2011, the Burmese government transitioned to a more democratic rule of governance and the military stepped back.

Shortly after this democratic transition, there was a spike in violence in the far western province called Rakhine. The Rakhine Buddhists led attacks against a community that calls itself Rohingya. The reason I say “calls itself” Rohingya, is because the Burmese government refuses to acknowledge the legitimacy of the term, but the Rohingya self-identify as Rohingya.

Abby: Can you provide us with a general overview of the situation in Myanmar?

Michael: The attacks against Muslims spread from the Rakhine province to other areas in Myanmar, such as Meiktila in March 2013. As democracy unfolded in Myanmar and more voices were heard there was a marked increase of activity from the Buddhist nationalist groups on the need for Myanmar to become more Buddhist. One example of this comes in 2015 when the organization called the Ma Ba Tha, loosely translated as the Association for the Protection of Race and Religion, pushed forward four new laws for Myanmar that were supposedly meant to protect Myanmar as a whole. The first of these laws was the monogamy law, which limited marriages to only one spouse. The second was the religious conversion law, which required the state to oversee any person’s religious conversion. The interfaith marriage law required state oversight over marriages between different religions, specifically Muslims and Buddhists. And lastly, the population control law, which required that mothers had to space their pregnancies so that they were at least 36 months apart from one another. All four of these laws, collectively, have been deemed by Human Rights Watch and other NGOs as discriminatory toward Muslims and the Rohingya.

Throughout the continued atrocities in these concentration camps, the Rohingya made attempts to escape. But they had no place to go. On 24 August, 2017, the Burmese government reported that the Rohingya insurgents attacked police in Rakhine province. These attacks sparked another wave of violence against the Rohingya. This violence was mounted by Burmese military and civilian personnel, and led to the fleeing of Rohingya from their homes. Over 170 villages were vacated, 80 villages burned to the ground. Over 400,000 Rohingya have fled across the Burmese borders to Bangladesh.

Sarah: How is this current violence different from what we have seen in the past?

Michael: Perhaps one of the most explicit differences is the intensity with the amount of lives displaced and lost. But another is the point of no return for the Burmese democratic government. In 2010, after two decades under house arrest the Nobel Peace laureate Aung San Suu Kyi was released. Two years later Myanmar emerged with a nascent, fragile democracy. It seemed premature for the international community to exert political pressure on her. And when Aung San Suu Kyi’s political party the National League for Democracy campaigned during the 2015 elections, international policy makers and rights activists thought that pushing her to make a strong stance against the violence might not be productive, because she was in a fragile position. The thought was that she wasn’t able to speak out too much without hurting the political capital of her party. But once Aung San Suu Kyi took office in April 2016 the situation became very different. She was able to solidify her base and the government. The question then became: how will Aung San Suu Kyi’s administration respond to this violence?

Unfortunately, from what we have seen from her party and from Aung San Suu Kyi herself have directly supported the alienation of the Rohingya and the official dismissal of violence against them. She has rejected inquiries by the United Nations into attacks and rape, she has refused to use the term Rohingya, and she has refused to acknowledge the human rights violations, claiming these violations stem from fake news. Now Myanmar doesn’t have a junta, but rather a democratic government supporting and taking part in the human rights violations and attacks. And there is now more violence and migration of refugees out of Myanmar than ever before.

The situation is similar to the current predicament with North Korea. US ambassador to the United Nations Nikki Haley argues that previous US presidents and Western governments have “kicked the can,” by not acting on North Korea in the hopes that things will get better. But this hasn’t happened and the international community is now at a point of “no return” when it comes to nuclear weapons in North Korea.

I believe the same situation has arisen in Myanmar. The international community has “kicked the can” until we have passed the boiling point.

Michael Jerryson is an associate professor of religious studies at Youngstown State University. Since 2004, he has lived and worked in Buddhist-Muslim conflict zones throughout Southeast Asia. Among his publications, he is co-editor of Buddhist Warfare, author of Buddhist Fury: Religion and Violence in southern Thailand (2011) and his forthcoming book, If You Meet the Buddha on the Road: Buddhism, Politics, and Violence.

Sarah Seniuk has her Masters in Ethics, Peace, and Global Affairs from American University. Her work focuses on the re-imagining of human rights frameworks, and problematizing identities surrounding violence. She currently does communications work for the Arab American Institute in Washington, DC.

Abby Kulisz is a PhD student at Indiana University in the Department of Religious Studies. Her research focuses on pre-modern religions with an emphasis on textual representations of gender, violence, and identity. She is currently working on a project about the affective dimensions of early Christian and Islamic sources.