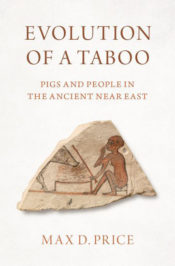 Evolution of a Taboo: Pigs and People in the Ancient Near East

It might be an exaggeration to say a boar broke the internet. But when someone posted an image of wild boar sleeping on a mattress and surrounded by garbage from a recently-raided dumpster in Haifa, Israel in March, Twitter briefly erupted.

Not everyone is thrilled about Haifa’s suid inhabitants, which roam the city, eat trash, and sometimes attack people. In a recent article in The New York Times, Patrick Kingsley documents the uneasy relationship, not only between people and pigs, but also between the people who want the animals eliminated and those who welcome them. In a country plagued by bitter resentments, boar added one more thing to fight about.

One can appreciate the differences of opinion. Wild boar are magnificent animals, with thick brown hair, long snouts, and deep-set, intelligent eyes. They are also dangerous. Growing to 100kg or more, they can charge when cornered or startled. Worse, males grow razor-sharp tusks that turn their heads into massive spiked clubs.

But the power of pigs lies in their symbolic significance far more than their morphology.

In documenting the divisiveness surrounding boar, Kingsley curiously omits an important detail. The drama over the fate of Haifa’s boar plays out against a backdrop of taboo and religious law.

Pigs and wild boar are the taboo animal par excellence in Judaism and Islam. They are banned repeatedly in both the Quran and the Torah. At the same time, the New Testament makes pork available to Christians as food. These contradictory positions on pigs have elicited intense reactions born out of disgust, tradition, and prejudice for millennia. Such emotions are fueled by and in turn feed conflicts. They exacerbate resentments and all too often lead to acts of humiliation and terror.

Take for example, the story told in II Maccabees 7. Around 167 BC, in the midst of a crackdown on Jewish traditions in the Seleucid empire, a Jewish woman and her sons are arrested and commanded to eat pork or die. They choose death. True or apocryphal, such steadfast adherence to Jewish law exemplifies the religious and nationalist zeal that would ultimately lead to the establishment of the Jewish Hasmonean Kingdom.

Pork-centered bigotry did not end with the Seleucids. The Romans, who conquered the Hasmoneans in 63 BC, widely mocked Jewish customs. A millennium and a half later, the Inquisition demanded Jews and Muslims not only to eat pork, but also enjoy it, in order to prove their conversion to Christianity. Today, there are more episodes than one can count of people terrorizing mosques, synagogues, and community centers with pig body parts or pork products.

Oppression is not always of pig-eaters against pig-abstainers. In 2009, amidst fears of the H1N1 “Swine Flu” outbreak, the Egyptian government, against the advice of the WHO, culled hundreds of thousands of pigs that belonged to Christian trash collectors, the Zabaleen. Pigs represented a substantial part of the Zabaleen’s livelihood; their loss threatened an already marginalized community with crippling poverty.

Haifa is often held up as exemplary of an integrated city in Israel. Arabic, Hebrew, Amharic, and Russian are spoken on its streets. Over a third of the roughly 20,000 students at the University of Haifa are Arab-Israeli. Compared to more segregated cities like Jerusalem, Haifa looks like a model of what Israel could be.

Nevertheless, several social fault lines run through the city. Jews and Arabs may both call the city home, but the relationship between them is tense and very unequal. Discrimination and mutual avoidance are commonplace. The (mostly Jewish) rich and famous live in the Denia neighborhood on the slopes of Mt. Carmel, while Arab neighborhoods such as al-Khalisa experience poverty and high crime rates.

Fault lines run through the Jewish communities as well. Haifa’s Russian-Israelis and Ethiopian-Israelis (Beta Israel), who arrived via state-supported aliya programs, are concentrated in neighborhoods such as Kiryat Haim that suffer from crime and neglect. Both Jewish groups face discrimination and police harassment, epitomized by the 2019 shooting of Solomon Teka in Kiryat Haim and the nation-wide protests that followed.

The growing Haredim (“ultra-Orthodox”) community is (self-)segregated from the more secular Jewish communities. The two broad sections of the Jewish population have long disagreed over the appropriate political and cultural trajectory for Israel, with the Haredim more recently showing themselves to be ardent supporters of Benjamin Netanyahu’s right-wing government. As Haredim move in larger numbers into Haifa neighborhoods such as Naveh Sha’anan, tensions have followed.

As in so much of the developed world, economic inequality is high in Israel, which sports a Gini coefficient around 0.39, similar to the United States (0.41). Neoliberal policies within the “Start-Up Nation” have hollowed out all semblance of solidarity. An upwardly-mobile and cosmopolitan class fattens their pockets while the working class, often separated from the upper class not only by income but also by ethnic background, is beset by high costs of living and frustrated ambitions.

For now, the wild boar are equal-opportunity offenders in Haifa. They invade rich and poor neighborhoods alike. One can hope that the need to address the problems posed by wild boar will bring together people from different sectors of Haifa society. Perhaps the search for a solution endorsed by multiple stakeholders will help build trust among various groups. Or perhaps the growing disagreements about the pigs will fall along existing fault lines, aggravating the existing animosities and becoming one more element in Israel’s multi-front culture war.

The lesson of pigs over the past two and half millennia is more than just to demonstrate that in highly unequal societies, those with power exploit, murder, and humiliate those without. Or that different ethnic and religious groups are wont to disagree, especially when wealth is not equally shared. It is that pigs, because of their unique history in the Middle East and the contradictory position of being a source of food for some and pollution for others, possess an almost uncanny ability to insert themselves into existing social conflicts. They often become the focus of conflict, or even metonymic of social tension. It is this recurring role that has given the pig taboo its unique power in Judaism and Islam. If history is any indication, the power of pigs will transform what is now an ecological debate about wild animals in Haifa into a conflict that further separates people within an already divided society.

Max D. Price is Lecturer in Archaeology at the Massachusetts Institute of Technology. Price is the author of Evolution of Taboo: Pigs and People in the Ancient Near East (Oxford 2021).